The Face Of Homelessness

A group of CB students recently faced the reality of life on the streets. Displace Me is a twenty-four hour mini-immersion into the life of the maltreated homeless person and is run by Ms. Jennifer Lystrup through her social justice class. After three weeks of discussing all aspects of homelessness and after reading a book […]

A group of CB students recently faced the reality of life on the streets. 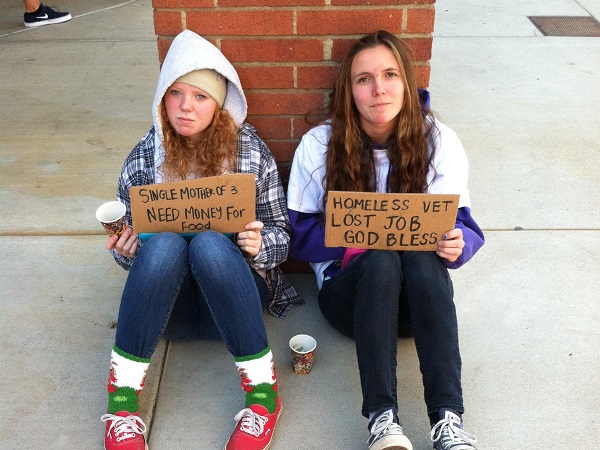 Displace Me is a twenty-four hour mini-immersion into the life of the maltreated homeless person and is run by Ms. Jennifer Lystrup through her social justice class. After three weeks of discussing all aspects of homelessness and after reading a book called Radical Compassion, her students participate in the journey of experiencing homelessness first hand.

“I did Displace Me because I wanted to understand what it felt like to be homeless,” remarks Lauren Adams (’14). “We see homeless everyday and many times we walk by without a second thought. But most people never think about why or how the homeless became homeless or what homelessness really entails”.

Lauren participated in Displace Me because she wanted to gain a new perspective about what homelessness truly is.

The students were given the opportunity to meet two individuals: one who is twenty-three years old and currently homeless, the other who was formally homeless and is now the Wind Youth Outreach Coordinator. The Wind Youth provides shelter for homeless youth.

“The stories told by our two speakers revealed the shocking injustices homeless are subjected to” Lauren says.

“The guests talked a lot about being ticketed for sleeping in public places,” elaborates Ms. Lystrup. “The shelters get very full. If the shelters are full, they have to sleep on the streets. If the police come, they can ticket you with a three hundred dollar ticket,” she says.

After going to court and being unable to pay the ticket, they go to jail.

“It’s called the criminalization of homelessness” continues Ms. Lystrup. “Now they have a record just for sleeping on the streets”.

The students then had to face sleeping in a cardboard box in 40 degree weather for an entire night. Many of the students of Displace Me found they were feeling extremely tired throughout the following day.

Ms. Lystrup explains the students “were tired because they were sleeping out in the elements — that’s what it does to your body”.

“I also realized that appearance is the last thing on my mind during the whole experience, ” says senior Charlie Ibarra (’14). “When you’re tired, hungry, dirty, and cold, how my hair looked was far from on my mind”.

While “spare changing”, the students asked other students for donations and were extremely surprised by the responses they were receiving.

“I had food thrown at me and cruel words spat at me,” Charlie says. “Just because I was dressed differently, students thought they could treat me, a senior classmen and fellow student, as if I were beneath them”.

“Many people were uncomfortable or afraid and wouldn’t make eye contact,” the senior added. “Other people looked you straight in the eye with a look of disgust and continued walking”.

“I can’t imagine what it is like to experience that every day,” she adds.

However, both students agreed that there was an equal amount of respect demonstrated towards them.

“One teacher I don’t know too well bought me a cookie and gave me the change with it — that meant a lot to me” says Charlie.

After collecting money for an entire day, the students raised $400 for the Wind Youth to put toward clean, fresh socks and underwear for homeless youth.

After the experience, the students feel they have a better understanding of those who are homeless and realize that homelessness is a reality for many, and that reality can be for anyone. Those who are homeless are no longer only those with drug or alcoholic problems, but they are people who had jobs and families just like anyone else.

“I think the overall lesson Displace Me taught me is that your situation doesn’t define you,” Lauren adds. “That is something I will never forget”.

Charlie’s perception of one of CB’s Five Core Principles — concern for the poor and social justice — was shifted after participating in Display Me.

“I know now that I am not doing nearly enough in contributing to homeless community” she comments.

After getting a bit emotional for her love of Displace Me and its effects on students, Ms. Lystrup concludes, “And by the grace of God go I”.