A Barnes Legacy At CB

The Talon took a deeper look at their legacy of the Barnes over the past 10 years. The Barnes men have been familiar faces on CB’s campus beginning with Mr. Lorcan Barnes becoming President of Christian Brothers in 2004 and then with his oldest graduated son, Jimmy Barnes ’12. Mr. Barnes has been proudly working for […]

The Talon took a deeper look at their legacy of the Barnes over the past 10 years. 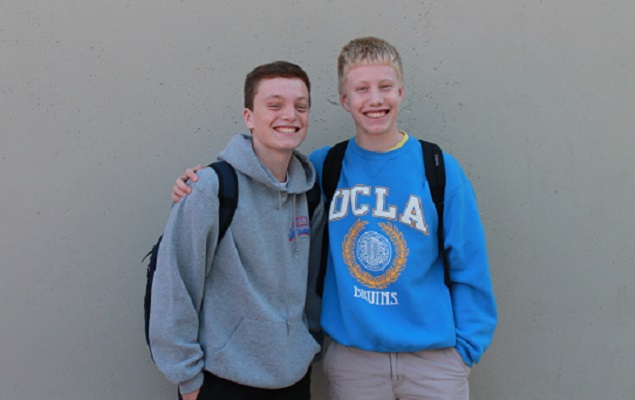 The Barnes men have been familiar faces on CB’s campus beginning with Mr. Lorcan Barnes becoming President of Christian Brothers in 2004 and then with his oldest graduated son, Jimmy Barnes ’12.

Mr. Barnes has been proudly working for CB for the past ten years, and is thrilled to work on campus with his sons.

“Working at the same school as my boys is fun and I’m proud of them,” Mr. Barnes says. “Sometimes it’s hard for them that their dad works here, but they handle it well.”

Since Mr. Barnes is in a higher position and does not interact with students as much, there’s no tension with him making decisions concerning the boys’ friends.

“It’s probably more difficult for students whose parents are teachers and coaches because I’m not on the front line with students so I don’t make an impact with their friends’ grades or playing time on a sports team or discipline decisions,” he says. “So I think for my kids, having me removed from those [things], it makes it a little easier.”

Being the baby of the family, Patrick Barnes (’17) has big shoes to fill. He not only follows in his father’s shadow, but also in that of two older brothers.

“Seeing as how both my brothers went to CB, I guess I have to live up to their standards, especially for the teachers that had both of them,” Patrick explains. “But for the most part, I am a lot different from both Jack and Jimmy, and I get the same respect as both of them would.”

It is never easy being compared to siblings, but Patrick handles the pressure well.

And last but not least, there is junior Jack Barnes (’15). Jack enjoys having his father on campus, and explains how he and his brothers get the same punishment as any other kid.

“My brother and I tend not to get into trouble that often,” says Jack. “But when we do, word travels a bit faster than to a parent working elsewhere. Otherwise punishments are the same as any other kids, with the exception that we may be made to feel slightly more guilty since our dad works on campus.”

So other than having the Barnes name, they are treated like any other student at school. The boys follow the same rules, with the same expectations that any other parent would.

Jack believes he is lucky to have his father working at CB, and tells the Talon that he enjoys his dad’s company at school.

“Having my dad at school is an overall blessing,” he exclaims. “Most teachers already know me, regardless of whether or not I’ve taken their class already. But I’m not bothered too much by my dad working at the school primarily since he dos not interact as much with students as teachers do.”

The Barnes’ legacy began in 2004, and will hopefully continue for many years to come.