College Recruiting Is A Tall Task

Why do college football recruiters value stats over size? With the regular season winding down, some of our talented football Falcons are being considered to play at the next level. CB is no stranger to big time college football recruiting. Former standouts such as Asante Cleveland ’10, currently playing for Miami Hurricanes, while Bryan Lane […]

Why do college football recruiters value stats over size? 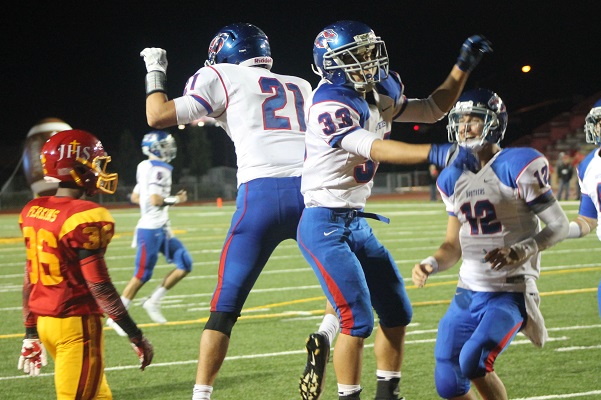 With the regular season winding down, some of our talented football Falcons are being considered to play at the next level. CB is no stranger to big time college football recruiting. Former standouts such as Asante Cleveland ’10, currently playing for Miami Hurricanes, while Bryan Lane ’11 plays up the road at the University of Nevada, Reno.

This year’s senior class is drawing much interest from many college programs. Wide receiver Brandon Thompson (’14) and tight end Hayden Jones (’14) are drawing interest from a handful of PAC-12 and Mountain West Conferebce schools. But what about the other great contributors on the Falcons who are having great seasons, who are not drawing interest from the next level?

Star running back Mason Stahley (’14) leads our Falcons with 727 rushing yards and second on the team in receiving yards with 333 to his name. His electrifying style of play has sparked the Falcons to a 6-3 record and with a reasonable shot at the Divsion III playoffs.

Unfortunately, players like Mason who are so dangerous and vital, are often undersized compared to the average running back. Mason stands at 5’7 and weighs about 145 pounds. This is very far from the 6’2, 195 pound running back that all college recruiters target.

Recruiters often base their ratings off size and projections, not so much on the hard earned numbers. Guys like Mason play with so much heart and determination, one thing that recruiters cannot measure. Mason may not be catching the attention of big time college recruiters, but he is building a solid legacy in his time in the CB football program.

“I try not to let it bother me, I just go out there and play to the best of my ability,” he says. “I love the guys I’ve played with my four years, and they support me.”

Mason says his favorite professional player to watch is Danny Woodhead, also an undersized running back who plays for the San Diego Chargers, who is having another great season this fall. Woodhead and Mason are strong runners that also shine in screen plays and other check down plays.

The smaller guys don’t get the same look as taller and players, it is unfortunate that grit and heart and not measured.

Size or not, Mason is a vital part of our team, and is leaving behind a great career in his four seasons in the program.  Mason’s numbers this season prove he is capable of playing at the next level, and he awaits any opportunity to shine in the college ranks.