Auditioning for Open Mic is quite simple — if you are not afraid to preform in front of people that is. As a relatively artistic school, Open Mic is a way for students to express their hidden talents that they may not get the chance to show during the school year. This is the first […]

Auditioning for Open Mic is quite simple — if you are not afraid to preform in front of people that is. 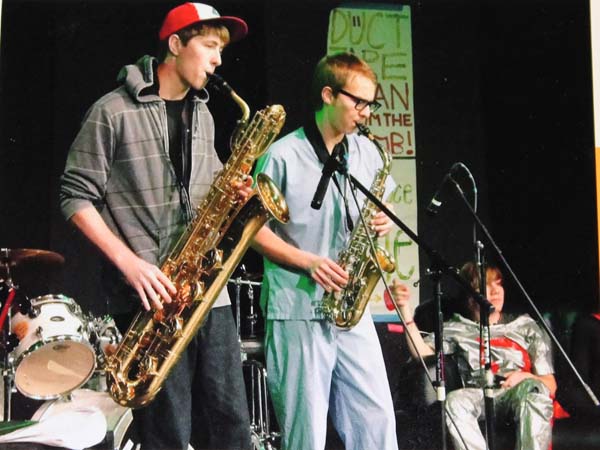 As a relatively artistic school, Open Mic is a way for students to express their hidden talents that they may not get the chance to show during the school year.

This is the first of four Open Mic this year, so if you are interested in auditioning there are three more shows to demonstrate your talent. The moderator for this club is Ms. Natalia Chiapa ’00 and Dylan Santana (’14), Megan O’ Hearn (’14) and Josh Stone (’14) are the main people in charge of the club.

Although auditioning is over for this Open Mic, the Talon is here to tell you how auditioning works for future reference. To get into auditions, you fill out a form on what your act is, how long it is, your name or band name, and other contact information. Once filling out the form you, preform your act in Ms. Chiapa’s room and then you will be given information on dates, times, and then you are done!

Last year, the Open Mic crew believed they had a great turnout for additions, getting between 16-25 acts. But this year they had “over 35 acts that performed for us and they were all very fantastic,” Dylan says.

The possible reason for this huge turnout is because unlike the past few years of a mostly music based performances, it is now being focused on non-music acts as well.

“[We’re] advertising to bring in new categories of acts to make the show less of an music only concert,” Dylan says.

This gives more availability to the students at school who want to show their special talents that are not just singing and dancing.

The process to audition is quite simple, but creating the show requires preparation weeks in advance. According to Dylan it takes several weekly meetings to choose themes and organize decorations ideas and after that another several hours, at least, to make “more decisions based on the acts,” Dylan says.

A new element will be added to Open Mic by the end of the year – it will be held in the new theater! This is very exiting to someone like Kimberly Taketa (’14)  who does a lot of the stage managing.

“I plan on going into theater production for my career and this club helps me experience working as a team,” she says.

For anyone who is interested in live performance or even just doing the behind the scenes stuff, Open Mic is a great chance to give you the experience needed for those careers.

Dylan is looking forward to “all the joy that Open Mic will bring to the performer by allowing them to showcase their talents”.

He says that they are ready to put on the best shows the club has ever had.

“[We are ready to] entertain hundreds and let the entire school know that ‘Our Stage is Your Stage’,” he said, referring to the the motto of Open Mic.

Open Mic is a great club to be involved in if you are interested in showing your talents. The Talon highly suggests auditioning for the next Open Mic and definitely going to go see the first Open Mic of the year, this Friday at 7 PM.