Fashion. Music. Bieber. These are the things that make Maddie Nicolas one of CB’s most original hipsters. After a month of soul searching, a few articles, and many spirit walks, I have decided to return to write the next chapter in Original Hipster: Maddie Nicolas (’15). She’s a Junior at Christian Brothers High School and […]

Fashion. Music. Bieber. These are the things that make Maddie Nicolas one of CB’s most original hipsters. 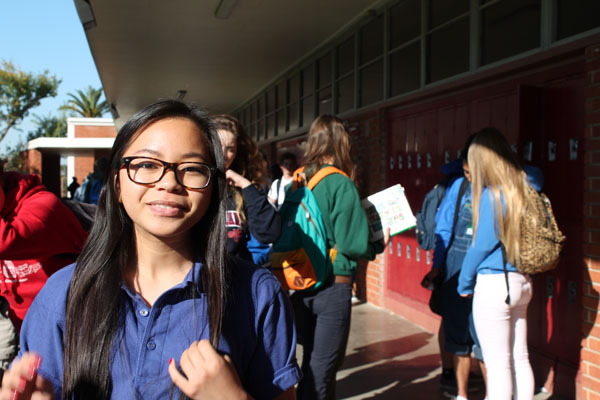 After a month of soul searching, a few articles, and many spirit walks, I have decided to return to write the next chapter in Original Hipster: Maddie Nicolas (’15). She’s a Junior at Christian Brothers High School and she’s definitely a hipster.

I mean, I could play it off and act like there’s any question, but come on. She wears prescription Ray-Ban’s.

But is she an original hipster? With such a vintage, hipster fashion sense, the line between ingenuity and blind-trend-following can be a hard one to recognize, but I walked the line to find out the truth for my readers, all three of them.

Apart from reinforcing the misspelling of my name, there isn’t much reason to dislike Maddie. She is often quiet at school, keeping to her group of friends, but she is respectful to all who approach her. She’s an all-star student, which really actually sucks because she makes everyone look bad. Thanks, Maddie.

When Maddie was a child, she was into Disney Channel and American Girl Dolls. Soooooooo hipster. But her music taste was probably the biggest surprise.

“In 6th grade, I had this weird thing for Justin Beiber,” she says.

She seemed to be very embarrassed when she was talking about the Biebs, but I was confused because I thought everyone had the Bieber Fever at one point or another.

But no, it wasn’t until the 7th Grade that Maddie first experienced the ecstasy of being a hipster. Her English teacher often played music in her class, and she found herself genuinely enjoying music that wasn’t endorsed by Usher. Do people still know who Usher is?

She enjoyed two songs in particular, Best Friend by The Drums and another song she couldn’t remember the name of by Shout Out Louds. And those groups aren’t in some music middle ground like The Killers or Coldplay — they are stone cold hipster. I’m certain their 10 fans were really mad when they signed to a major label.

In middle school, Maddie started to  — surprise — develop in interest in fashion.

She found blogs online that focused on various fashions, but she found a specific interest in vintage clothing. What was it that Mr. Hood said about being old school?

Maddie found those blogs not via Tumblr, but via Blogspot, the Google-run blogging site that retains activity to this day, even though no one has seen a Blogspot since 2010.

Maddie developed an inspiration from these blogs, and after wearing new, exciting fashions and even posting a few of her hipster outfits online, she slowly relaxed her fashion muscle.

“I used to go shopping a lot, but I’ve mellowed out” says the young fashion guru.

When Maddie first got an Instagram account, she didn’t understand that the app was a social media tool. She believed that the app existed just to put filters on pictures and share them with an online community. She is above selfies.

“If you look at my Instagram from before I started using it as a social networking thing, it’s all photos from when I went to Italy, New York, and stuff,” she said nonchalantly.

Record collecting is one of the pinnacles of hipsterism. It involves music, big black trendy looking discs, and anyone can buy them. It’s the perfect remedy for the average Joe who wants to feel a little cooler. But then people place emphasis on buying vinyl, not music. It’s like people thinking plastic is cool because they buy a lot of DVDs. It’s a shame that hipsters don’t think plastic is cool.

But does Maddie buy records simply because they’re cool? Her friends started collecting records last year, but she finally got around to the hobby over the summer. Did she start collecting records because she wanted to? Or because she thought it was something cool to do? To be honest, I would tell you, but I didn’t really find out in my interview with her. This is shaping up to be the hardest case I’ve cracked.

In conclusion, I believe Maddie is an Original Hipster. It’s true, I decided she was on original hipster before writing the article, but hey, now it’s official. In fact, I give her the Official Seal of Original Hipsterness. That’s a thing now.

But in all seriousness, Maddie is a wonderful person to know. She is intelligent, always kind, always willing to help someone out, always clear headed, and although she crushes me in the academic circuit, I’m very glad that she is a member of our community.