If all animals were transformed into the size of a horse, scaled by volume, and they fought each other one versus one in a tournament, who would be the champion? This past week the Talon tried to figure out which animal Christian Brothers’ students think would reign supreme. After polling an assortment of forty students, […]

If all animals were transformed into the size of a horse, scaled by volume, and they fought each other one versus one in a tournament, who would be the champion? 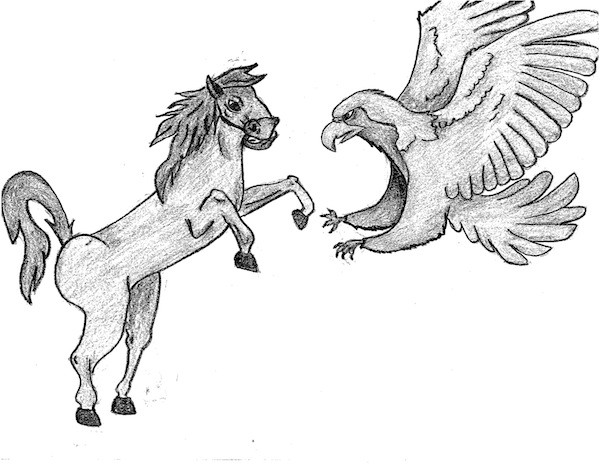 This past week the Talon tried to figure out which animal Christian Brothers’ students think would reign supreme. After polling an assortment of forty students, there is still no definite answer, just strong candidates. The “strongest” of these candidates according to the poll is the Honey Badger.

“The honey badger would obviously be the champion, it would give no regard to the other animals” hypothesised “independent thinker” Parker Kaye (’14).

The honey badger in its natural habitat is a force not many animals reckon with. This hypothetical, however, does not put the animals in their natural habitat. The honey badger survives because of its extreme aggression as well as the lack of animals willing to mess with it in its biome. Even though there is an extremely popular YouTube video outlining the ferocity of the honey badger, the Talon agreed it would not be able to stand a chance against any serious predator.

On the topic of serious predators, the peregrine falcon is a very serious contender.

“Just imagine how much damage a 1,100 pound falcon could incur” Gareth Durham (’14), advocate of the falcon, stated in amazement.

A peregrine falcon weighs between one to three pounds and has been known to be able to fly up to 242 miles per hour. If this uncanny natural ability was scaled up by roughly a thousand it would be nearly unstoppable. While a scaled up falcon appears to be a feathery ball of pure death, there are still other, primarily avian, contenders.

Although we are all proud to be falcons, the Talon’s favorite suggestion comes from Dana Kimball (’14).

“I’m not sure everyone would agree with me, but I think that the hummingbird would be the absolute champion,” Dana says.

Although the uncanny maneuverability of a hummingbird makes it a top contender there is still much more to this tiny terror. While normally weighing less than a penny, the hummingbird beats its wings in between twelve and eighty times a second. Its heart beats around 50 to 182 times per minute.The pure force that would be produced by a horse-sized hummingbird’s wings and heart is ludicrous to even think about. It moves so incredibly quickly and with such ease that there is little point in even considering the other contenders.

Overall, most animals scaled up to the size of a horse seem extremely overpowered. Even common animals such as a tabby cat would be insanely potent. Whether it be a cat, horse, hummingbird, or falcon, it would be one fantastic tournament.