Rivalry Has No Age

Every Christian Brothers football player, from freshman to senior, trains and looks forward to their biggest rivalry game of the season: Holy Bowl. Football is a season that never ends. Players train throughout the year, conditioning with weights, running sprints, drills, and constantly educating themselves on the plays that make the game. Being as it […]

Every Christian Brothers football player, from freshman to senior, trains and looks forward to their biggest rivalry game of the season: Holy Bowl. 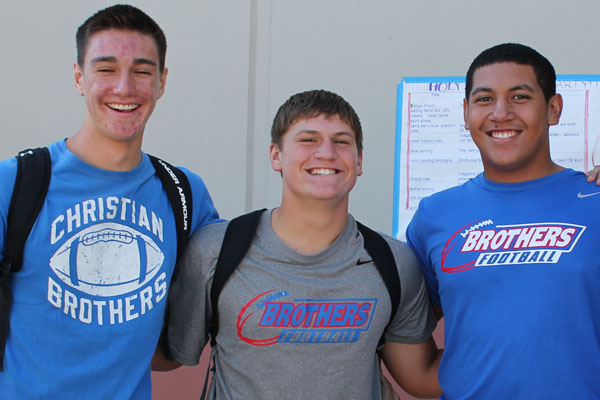 Football is a season that never ends. Players train throughout the year, conditioning with weights, running sprints, drills, and constantly educating themselves on the plays that make the game.

Being as it is their first Holy Bowl, the freshmen are experiencing playing in front of a crowd filled with alumni, parents, players, and friends for the first time.

“Winning is the ultimate goal,” says Ryan Murphy (’17), who will be playing in his first Holy Bowl on Saturday.

For a sophomore, this is a whole new experience. They have now graduated from the freshman to the JV team. Bragging rights become a little bit bigger, and the stakes are a little bit higher.

Christopher Thomas (’16) believes in his team and their many strengths over Jesuit’s JV team.

“Were going to win”, Thomas says with passion. “It was a close game last year, but we have better luck and skill this year with more desire to win.”

By the time varsity hits the field, the stadium is nearly packed with fans in anticipation of watching their team proudly wear their school colors with pride.

This is the game which every player from freshman to senior year prepare for in mind, body, and spirit, with high hopes and big dreams of bringing home the “W”.

“My expectations going into every game, Holy Bowl included , is for us to play hard,” according to varsity coach, Mr. George Petrissans, better known around campus as Coach P. “And that if we play hard and do our jobs, we’ll be successful”

Coach P. has a strong desire to win, and places a lot of faith in his players, especially this year’s senior class.

“I feel that we have great senior leaders,” he says. “[They] know how to be successful in difficult moments, and that leadership will help this team get them to where they want to be”.

The varsity squad has an immense amount of faith and confidence in each other going into the big game.

Sean Olson (’15) believes their greatest strength over Jesuit will be more than just how they play.

“Our greatest strength over Jesuit is our will to actually win this season, and also coming in with the mentality to win since we’re undefeated right now,” the junior says.

“I think it’s different [this year] because our team is more prepared and I feel that we have good fighters on our team,” adds Kellen Ralph (’15), “I also think that if we fight hard and use the speed of our offense, we can come out with a win.”

For a senior, this game is more than just bragging rights. It is the last time they get to prove themselves and play in this event, which every football player looks forward to their four years at Christian Brothers.

This is the game that little kids dream of playing in for their school, family, and themselves.

“It’s really sad, because if it goes wrong, it’s our last chance to win and prove ourselves since we’ve lost the past two years,” says “BIG” John Wagstaff (’14)

“I’m excited, hoping for a great win, and looking forward to having fun with the seniors.”  Julian Angulo (’14) says. “We’re a lot stronger, more focused, and are not over-amping the game.”

As each year passes, players become more confident and the bond between teammates grow. Players no longer play just for themselves, but for the brotherhood that they share.