America, The World, And Syria: A Sticky Situation

The world holds its breath as the conflict in Syria escalates. The Talon met up with Mr. Leporini and Dr. Peterson to get some more information on the subject.  (photo courtesy of Freedom House) “We are one of the main figure heads on the path of an idealogical battle” stated Vince Leporini AP Government Instructor The […]

The world holds its breath as the conflict in Syria escalates. The Talon met up with Mr. Leporini and Dr. Peterson to get some more information on the subject. 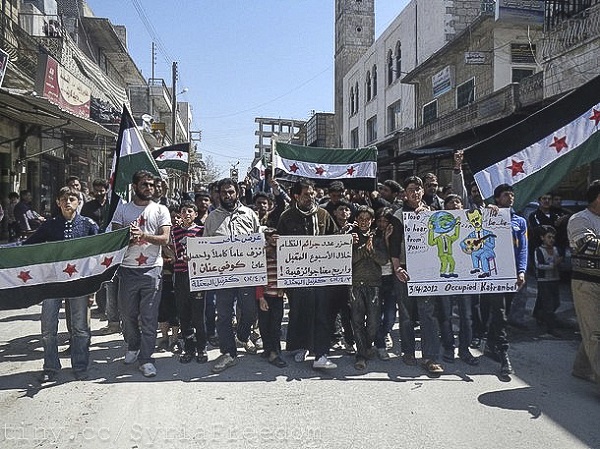 The United States has been internationally seen and titled the Worlds Police. When conflict arose in Syria the world looked to the United States to see what we would do. Even there is the United Nations to govern these affairs, America still has a big role to play.

Mr. Leporini also stated that the goals of the American government are “Revenge, or weakening he ability of the Syrian government.”

The Syria situation is extremely chaotic, anything could happen at anytime. Eliminating one party could lead to much stricter rule from another.

Obama currently only wants to intervene by tactical strike, but he could be forced to send troops in if the conditions worsen. Although Mr. Leporini stated that troops may need to be sent in in the future, he also noted that the U.S. should listen to internal and international council

“America can’t be a cowboy, they have to fit into the system that created the rules”

Engaging further in the conflict could have very serious ramifications

“Syria is a country that has its own political, geo-political, and religious setting.” says CB religious studies instructor Dr. Holy Peterson

Syria is located in the Middle East by several other countries with extremist parties. Due to its location Syria embodies a multitude of different political parties with different ideals. Both the rebels and the government have been brutal in the treatment of the civilians and each other.

“it is an extremely delicate balance” warned Dr. Peterson.

Because of their actions Syria has found itself in the center of an international conflict. America and the world is faced with the tough decision of deciding which party is the lesser of the evils. Many actions have already been taken but the events that will take place in the coming months will determine the future of Syria.