Falcon Of The Week: Dante Mazza

Become enraptured by “The Dante Story” Dante Mazza. Winner of the Signum Fidei award. Academic decathlon superstar. Chorister. Open Mic stage coordinator. Despite being heavily involved in the CB community, Dante has avoided the public eye for all of his years at Christian Brothers High School. I sat down with him for his first ever […]

Become enraptured by “The Dante Story” 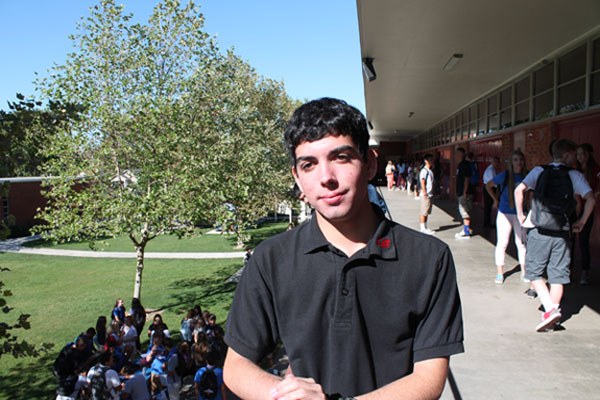 Despite being heavily involved in the CB community, Dante has avoided the public eye for all of his years at Christian Brothers High School. I sat down with him for his first ever public interview to get the whole story — The Dante Story.

Dante is a unique CB student, as if every CB student isn’t totally unique and special in their own way.

But Dante is more special. He carries himself with an intelligent disposition, always echoing respect with his booming voice, kind conscience, and witty remarks. And somehow, this beautiful young man has avoided ever revealing much of himself.

I met up with Dante in the Talon newsroom in Room 303 to shed light on this provacative enigma.

Who is Dante Mazza?

I feel like he didn’t really say anything, but it sounded like he did! So, that’s something.

Dante drives from Winters to get to CB everyday, in what makes for a 40 minute drive one way, but he doesn’t mind because it means he’s headed to a school he loves. He takes advantage of the many opportunities offered by our splendid school, including Open Mic Night.

“Open Mic Night is a very exciting, wonderful thing that I have been apart of since Freshman Year. I love my job and I love to see all the talent and commitment that people put forth on that stage.”

Despite seemingly being apart of every school related yunction, Dante manages to find time to relax.

“I like to be involved in other school activities outside of the classroom, but in my free time my favorite hobby I would say is travel. I love to experience our nation and our state of California. There is so much to be had in my local area that often time goes overlooked. California is something that needs to be experienced fully and that’s what I try to do when I do have the time.”

Dante’s interest in California derives from an attraction to variety in his life. He likes all different kinds of people, places, and music. He appreciates randomness and spontaneity. He finds the variety to be key to maintaining his interest.

He facilitates this point with his description of his music taste.

“I have a large collection of over 1800 songs spanning every genre from hip-hop to latin.”

I would love to catch Dante listening to some Biggie.

As the interview went on I started to wonder, is Dante a hipster?

“No, I would definitely not describe myself as a hipster. I don’t have any underground this or that, I don’t have time [to be a hipster].”

So I guess Dante’s a hipster.

Dante, would you describe yourself as a slave to fashion?

But what about your fashion? It’s unique.

“I’ve always had a consistent relationship with nicer clothes, but not with paying the price that goes with them. You know, I like to shop at Marshalls and stuff like that. But yeah, I do like to carry myself in a way which is presentable and classy, yeah. People have always said that. I kinda like that word. Classy and class. But I think professionalism is important in our world and so I always try to keep that in the back of my head as a way to act, a way to dress, a way to treat other people.”

“Positivity is so much more productive than negativity, and it will make you feel better too. So there’s no reason to not try and find that silver lining.”

Dante, what do you have to say to all the haters?

You go, Dante. What about the lovers?

You have a bit of a fandom.

“From what I hear. I like to think of it as a give and take. I’m not some sort of rockstar or anything.”

Would you say that you have a cult following?

“I would not say I have a cult following.”

And then I looked at him.

“There may be people who disagree with that.”

And I raised my eyebrows.

And I continued to look at him.

“I might have a cult following that I don’t know about, uhh, that other people seem to.. be saying they might know about.”

“If people like me it’s because I’ve done good things or I’ve been nice to them, and that’s what I try to do. I love to give people praise. And whenever they have an event or something, I always like to keep it in mind, congratulate them, follow the story.”

If you are ever lucky enough to see this man walk through Christian Brothers, tell him “Hey, thanks for being Dante Mazza.” He deserves the praise.

Also, it would be really funny.