The iPad has proven its success within CB classrooms from Science to English courses. Can it prove its usefulness within a classroom filled with instruments? Mr. Travis Maslen, Christian Brothers Band Director, is pleased to confirm the surprising and valuable benefits of the iPad within his Instrumental Band classroom. He exclaims his ease of quizzing his […]

The iPad has proven its success within CB classrooms from Science to English courses. Can it prove its usefulness within a classroom filled with instruments? 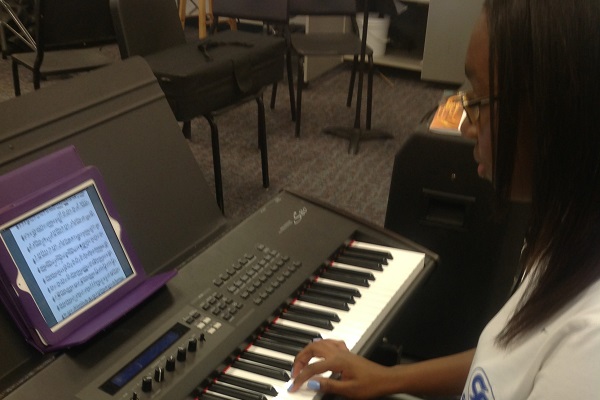 Mr. Travis Maslen, Christian Brothers Band Director, is pleased to confirm the surprising and valuable benefits of the iPad within his Instrumental Band classroom.

He exclaims his ease of quizzing his students as he is starting to do video quizzes.

“In the past, what I had them do used up a lot of class time. They would come in and play their scale for their weekly quiz,” he says. “Now I just create an assignment in Schoology and they record themselves playing”.

Senior Alyse Toth (’14), part of the String Ensemble, confirms that with the additional class time students spend “less time on quizzes and more time on actually getting the songs right in class”.

Another one of Mr. Maslen’s students, senior Neena Lynton (’14), agrees.

“Schoology has been the biggest part [of the class] because that is how Maslen uploads all of our music, and we just transfer all of it to our iBooks and it becomes a PDF. I organize all of it,” the senior says. “All our warm-ups are on one shelf, all of our melodies are on another shelf. It’s just a whole lot easier”.

Mr. Maslen says some special guests helped him discover how the vital the iPads can be for his class.

“We actually had a group come here last year called the Axiom Brass, the number one brass ensemble. They came here and performed for us. They all used the iPad’s.”

Neena, who attended the Axiom Brass visit, commented that the four peace brass section had their music on their iPad and that she prefers this style better than actual paper.

“It’s easier to organize and store, because before we just had a big black folder with tons of papers in it and it was hard to find which piece was with what,” she says. “On the iPad it’s always neat”.

Alyse predicts that the iPad’s will greatly prove their value during the spring when concerts held outside will be performed. Wind, which has been a huge disruption to performances in the past, will be hindered by the iPads’ sturdy nature.

“Performances will probably be better and easier because you won’t lose your music,”  Alyse states. “Part of the performances is turning the page; now with the iPad, page turning is not an issue”.

With this school year just beginning, Mr. Maslen is sure to find even more uses for the iPad throughout the year.

“Yesterday we were talking in class… about some version of a song they had found on YouTube”.

This unpredictable use of the iPad not only gave Mr. Maslen insight for the correct  song to perform for an upcoming school liturgy, but also demonstrated one of the many chances the iPad will continue to add to his classroom.