There has been a question that has been raging for years at CB: Is Mr. Hood a hipster? The Talon’s Nick Garcia found the answer. Hipster: a person who is unusually aware of and interested in new and unconventional patterns (as in jazz or fashion), as defined by Webster’s Dictionary. Hipster: Definitions are too mainstream, […]

There has been a question that has been raging for years at CB: Is Mr. Hood a hipster? The Talon’s Nick Garcia found the answer. 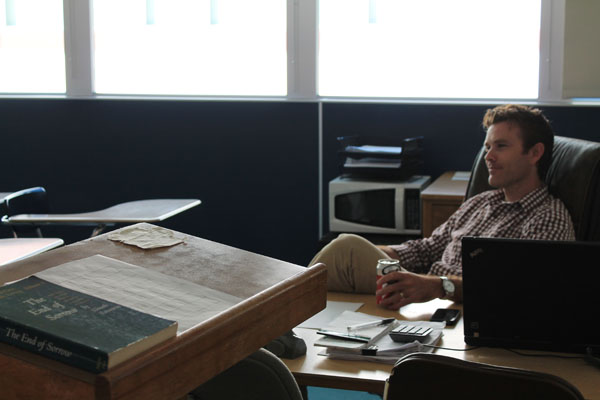 Hipster: a person who is unusually aware of and interested in new and unconventional patterns (as in jazz or fashion), as defined by Webster’s Dictionary.

Hipster: Definitions are too mainstream, as defined by Urban Dictionary.

In the last two decades, a subculture of independent thinkers and artists has developed in major cosmopolitan areas and artistic centers like Brooklyn, San Francisco, Seattle, or Portland. These people are defined by their interest in alternative art, fashion, and culture. They live for the culture and knowledge that they hold dear to their hearts.

In the last five years or so, another phenomena has occurred. Hipsterism has become mainstream.

Some blame the Internet, some might blame Built to Spill. Never heard of them? Exactly.

Today you might find many people wearing funky-patterned leggings, huge grandpa sweaters, or really anything dirty and weird. These people might be uncomfortable hearing the word hipster or they might get upset if they hear one of their favorite songs in their local grocery store. They may be upset that the hipster culture is always growing.

This popularity of hipster culture poses no issue for original hipsters. They don’t care. They were never apart of the culture for the image. They were always in the game for the art, man.

So, who are they? Where are they? Are they at CB?

I met up with Mr. Hood in his classroom, room 405, during a four-block-day lunch. I walked in to see Mr. Hood casually listening to music, his feet up on his desk.

After a short greeting, I started the interview with the simple question: Do you think you’re a hipster?

After a short pause, he answered my question.

“Depends on the term”

And then he continued to speak. And ended up answering all of my interview questions.

“When I think of hipster, I think of people who try desperately — it seems like a desperate thing. Like, they need to dress differently or have different things or this intentional being old school [attitude] for no real purpose other than to be old school.”

Needless to say, Mr. Hood had a variety of thoughts on various topics.

Mr. Hood on being a hipster:

“I will say I have my own set of interests and, I’m passionate about my own things.”

“I like Macklemore a lot, I think he’s really intelligent. But then I also really love Beethoven.” What a hipster.

Mr. Hood’s on the topic of music:

“I go through phases where I listen to everything of what particular genre. I went through classical music phase, reggae phase, jazz, classical, hip-hop’s always been there.”

“I listen to really heavy death metal type stuff too, everything.”

Mr. Hood on his passions:

“Music, reading, I love to write, right now I’m kinda again passionate about spiritual thing. My overall passion right now is, kinda has to be, but my kids basically. Hangin’ out with them.” So a key difference between hipsters and original hipsters is the apathy level. Original hipsters aren’t afraid to show they care. Meaning hipsters really do care. Or they are crazy. So they are either crazy or they are lying.

“I’ll willingly admit that I watch The Bachelorette. Or the Bachelor.”

“[I love] anything with Will Ferrell in it.”

“The Big Lebowski is the funniest movie ever.”

“I came to the conclusion that whatever my career was, I did not want to be hurting people in any way. So that means selling them something they don’t need to have, or benefiting myself at the expense of others. I’d rather do something beneficial. Teaching seemed like a good bet.” Ugh, what an upstanding guy.

In conclusions, I have found without a reasonable doubt that Mr. Hood is indeed an original hipster, if not the original hipster. Mr. Hood is a genuine person, he is not pretentious, he does not think he is better than anyone, and he has respect for all people. The man himself was able to sum it up best:

“I’m not trying to hide anything about myself.”