A Season Of Promise

The CB men’s soccer team has high expectations for this season — and they want to have fun while doing it. Christian Brothers Men’s soccer is in full swing for the 2013 season. Coach Jake Hunley (’96) has great expectations and faith in one of the most powerful and talented teams he’s had the opportunity […]

The CB men’s soccer team has high expectations for this season — and they want to have fun while doing it. 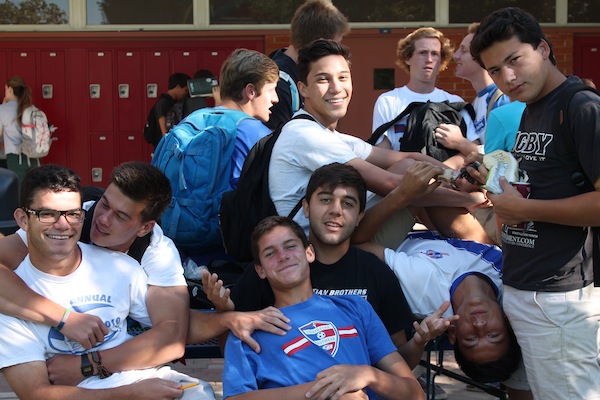 Christian Brothers Men’s soccer is in full swing for the 2013 season. Coach Jake Hunley (’96) has great expectations and faith in one of the most powerful and talented teams he’s had the opportunity to coach in years.

“We have more skill and natural talent than we’ve had in the 8 years I’ve coached,” Coach Hunley says. “But our greatest strength will be our desire to win and reach our full potential.”

With a combination of sophomores, juniors, and seniors, this team has the makings to be a powerhouse.
“We determine where our season goes. We have the ability to play with any team in the section and the only thing can hold us back is ourselves”, explained Coach Hunley.

The men’s soccer team has competed in two preseason games thus far, and has indeed been bonding and trying to work out the kinks.

“The coaches have what’s best in mind for our team and as individuals, and they want us to do well on the field as well as in the classroom,” says striker Kristian Heptner (’15). “Their goal is to also help make us better individuals on and off the field.”

Playing with this team is more than just winning and losing on the field, as the coaches genuinely care about the boys’ academics as well. For the past several years, the men’s soccer team has received the honor of maintaining a 3.0 grade point average throughout the season.

Being a part of this team not only provides the boys academic opportunities, but also the chance to play soccer with some of their best friends. Most of the players on this team play for competitive clubs, competing against each other throughout the year. This is their one chance to play together as a team and for their school.

“The best part of high school soccer is my teammates,” explains defender and team captain Jackson Long (’14). “These are the lads I will remember for the rest of my life.”

Goalkeeper Alec Edelmayer (’15), has faith in his team and coaches to excel this upcoming season.

“We have a young team that has a lot of skills and potential this year and I believe that if we use that skill and potential wisely, we might win league”.

By having faith in one another, the boys believe they will excel far not only in league, but as a team. They represent the school, they wear their uniforms with pride, but most of all, they play for one another.