The long anticipated wait is over. Football season is here. The 2013 Christian Brothers Falcons look to build on last years stellar 6-5 season, which included a playoff appearance. With numerous returning starters on both sides of the ball, the sky is truly is the limit for this teams potential. Success doesn’t come easy — […]

The long anticipated wait is over. Football season is here. 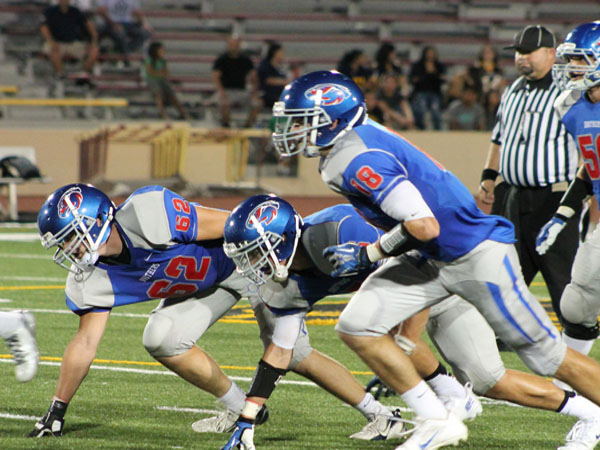 The 2013 Christian Brothers Falcons look to build on last years stellar 6-5 season, which included a playoff appearance. With numerous returning starters on both sides of the ball, the sky is truly is the limit for this teams potential.

Success doesn’t come easy — our boys have been logging hours of hard work dating back to January. The team made significant strides over the summer and really set the tone on the field.

“Going to Saint Mary’s camp, the Juniors and Seniors really got to know each other better,” explained Evan Cook (’14). “We played some really good teams, and saw who stepped up.”

The Falcons stepped up in a demanding way. Last Friday, the season officially kicked off with the Falcons facing an improved River City team. Mason Stahley (’14) stole the show with his electrifying style of play, running, catching, and returning a punt for a touchdown in his season debut.

When it was all said and done, Stahley held 254 all purpose yards to his name, earning him a nomination for the Sacramento Bee’s player of the week award.

Lets not forget about the rest of the offense, which also looked to be in mid-season form. Quarterback Chris Guillen (’15) looked sharp, tossing three impressive touchdowns, two brought in by senior, Erik Bloomquist (’14) .

On the defensive side of the ball, the Falcons were flying all over the field making plays, holding River City’s offense to just ten points. When the game clock had hit zeros, it was clear the Falcons had passed their first test by defeating the Raiders by a final score of 41-10.

Friday our boys travel to face a very good Placer Hillmen team. With two different explosive offenses, this game promises to be a great contest. CB as always will play a tough schedule and look to use this Friday’s game as a stepping stone on the path to another great season.

When asked what game on the schedule was circled besides Holy Bowl, both Evan and Mason said October 18th’s league match up with Rio Linda is a meaningful game. It was last season when our Falcons lost a heart breaker of a game at Rio Linda. There was no working game clock and this obstacle potentially was a cause for the Falcons defeat. The game unexpectedly ended with the Falcons inside the Rio Linda red zone down down 35-27.

This Falcon team has a special feel, a close bond between teammates. The seniors have experienced a winning atmosphere over the four years in the program, and fans are excited to see the end result.

“We play for each other, we don’t care about our stats, just simply about winning,” Mason says.

This winning and positive attitude is what drives this team to success and will allow them to compete for a league title. The Falcons just don’t want to stop with a league title under their belt — they are also hungry for playoff success. It’s been over 26 years since a CBHS has won a playoff football game and this group of seniors are eager to break the streak and go down as one of the best teams to walk through the campus in last three decades.

The stage is set for another great season of Brothers football. Make sure you come out to support our boys.