As Ms. Gallagher winds down in her last year in the classroom, she takes us through a tour of all the special objects she’s collected over her years of teaching. We may think Ms. Patricia Gallagher is just a French teacher here at CB, but she is much more than that.  Through her many years […]

As Ms. Gallagher winds down in her last year in the classroom, she takes us through a tour of all the special objects she’s collected over her years of teaching. 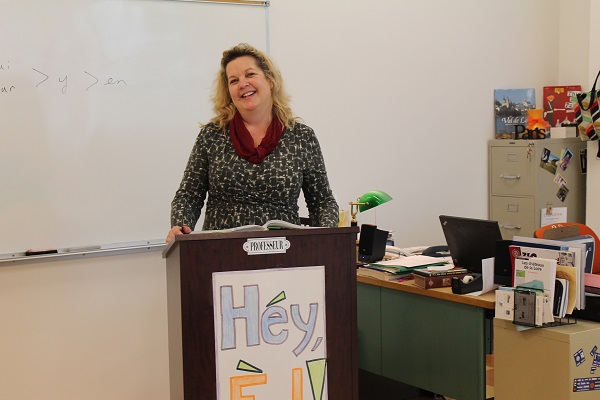 We may think Ms. Patricia Gallagher is just a French teacher here at CB, but she is much more than that.  Through her many years of teaching, from here at CB to her year teaching abroad in France, she has developed bonds and memories to last her a lifetime.

This decision to step away from the classroom to focus solely on the International Students Program here at Christian Brothers was not easy for her.  She knows she will miss the teaching environment, but she feels she needs to follow her own advice and take a chance.

“I went to school to be a high school French teacher,” Ms. Gallagher explained.  “I did exactly what I studied to do, but it’s a new day.  I’m going to do what I tell my kids to do. I’m going to take that leap of faith.”

Ms. Gallagher has picked out some items to share with The Talon that she feels hold the most memories for her. 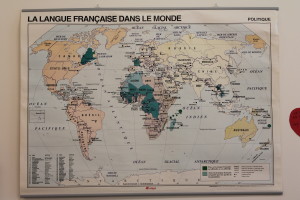 As you first walk into her classroom, you see a large map on the opposite wall.  It’s huge and it’s all in French. Ms. Gallagher has fished this map out of the garbage so many times she’s lost count.  But every time she sees it, she picks it right back up again and hangs it on her wall.  For her it’s more than a map; it’s a daily reminder of everything she hasn’t seen yet.

“It’s kind of my reminder that it’s out there waiting for me to discover more,” she said.  “Even though I’m a French teacher, there’s a big world out there and I haven’t’ touched it yet.  It’s a daily reminder that I’m connected to [the world].” 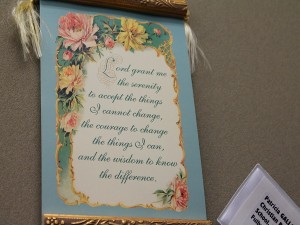 If you don’t walk toward her desk and instead you take a sharp left, you’ll see a board filled with papers, pictures, and even prayers.

The first one is a little scroll with the Serenity prayer on it.  This was a gift from one of her former students who graduated in 1999 and went on to become a nun.  Ms. Gallagher knew the student for most of her life and said that they would have long, in depth conversations, sometimes about their faith.

For Ms. Gallagher, talking about her faith is a big deal.  She talked about how she keeps it closely guarded and only shares it when she’s ready to.  She explains the special meaning behind the prayer and why she hangs it up.

“She gave this to me as a gift when she left here because this one of our prayers that we would talk about when things got rough,” Ms. Gallagher stated.  “It’s a reminder of really why I’m here and the conversations I get to have with the kids when all is quiet on the western front. You get to talk about God and what really matters.” 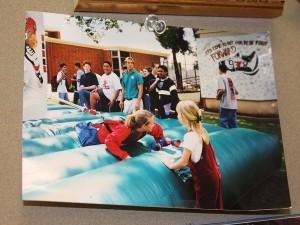 Just slightly below the prayer, there is an old picture of her two daughters playing on inflatable structures at CB.  Ms. Gallagher explained how the picture was taken on Founder’s Day when teachers brought their kids to everything.

The picture dates back to the early days of her teaching at CB.  The picture symbolizes more than her kids having fun —  it symbolizes how much CB has become an integral part of her life.

“Back in the day, we used to bring our kids when they were sick,” she explained.  “They’d come and they’d play.  Now they’re 25 and 22.  It’s a reminder of how much this place really means to me and that I’m willing to give up so much of my life to be here.” 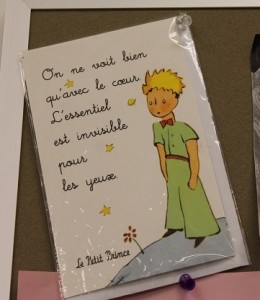 A little higher up on the board is a picture of this little boy with a French saying next to him.  Ms. Gallagher gave this card to Mr. Rudy Schultze, former CB principal who passed away in 2004.  The two were extremely close, and this is just one of the many tokens she has from him.

The two saw eye-to-eye on a lot of things, and this card was one of them.  She gave him the card because she felt the French saying was one of his life mottos.  When translated, the saying means “everything essential is only seen with your heart and not your eyes.”  The card came back to her after his death, and she hangs it up as way to calm herself when all seems lost.

“[The saying] was kind of like his motto [and] it is like mine,” the French teacher explained. “[Le Petit Prince] just one of those stories that teaches you the important things in life and what they really are.  When I look over at it, I forget what I’m worried about and it goes away.” 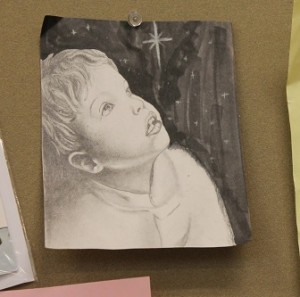 Right next to the card is a little, hand drawn baby staring up into the stars.  One of her students was also a fabulous artist and he used to draw on the back of tests all the time.  She said that “this is just an example of little things that he would hand me.” She admits that she “[has] a whole file of them tucked away.”

This drawing and all of her other ones represent more than just a little drawing on a piece of paper.  He embodies all of the students she has taught over the years.

“He represents my students in general that there’s a connection [between student and teacher,]” said Ms. Gallagher.  “Even though I’m teaching a language, they share a piece of their gifts with me along the way.” 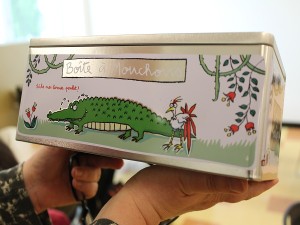 Once you’re done admiring the pretty pictures and head over to her desk, multiple shiny things catch your eye.  One is a little tissue box that conveniently lacks tissue.  Ms. Gallagher admits that the box “doesn’t have a lot of meaning as much as it demonstrates how well my own children know me.”

“My child went to the store in France one day and bought this for me and she knows that I’m not into crocodiles but that I could have it all my life and remember time with her in France,” stated Ms. Gallagher.  “It signifies that she gets me and she knows what I love and that she just wants to be a part of whatever it is.  It’s just my kid sharing my world with me.” 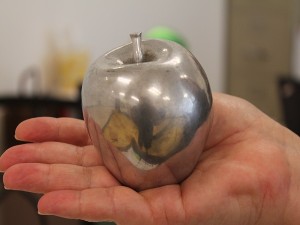 On the top of the book shelf are the final two items Ms. Gallagher chose to talk about.  The first is this heavy, silver apple that she has had since 1977.  When she was first learning French, she studied abroad with a family who had a furniture store.  The mother gave the apple to her when Ms. Gallagher told her that she was going to go into teaching.

“[The mother] told me that she wanted me to always keep this in your classroom and remember that I was one of your teachers,” she stated.  “[The apple is filled with] fond memories of a woman who taught me the depth of my language.” 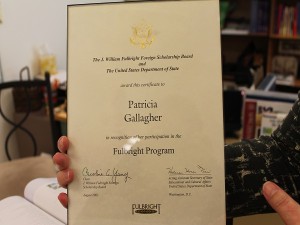 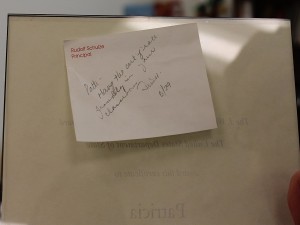 The final object rests just behind the silver apple.  Ms. Gallagher says that this is “one of my most prized possessions.”  The certificate is a gift from the Department of State and the Fullbright Scholarship Foundation after she spent “a year of my life in France teaching kids English.

“It’s just a piece of paper but it represents the biggest experiences and the hardest time in my life,” she happily explained.

If it weren’t for Mr. Schultze, students may not even know that Ms. Gallagher was awarded such a prestigious award from the United States.

“On the back of it, my beloved principle, Rudy Schultze, [left me a note,]” she said.  “[He] brought me this and the frame and said I should display this proudly because it represents a very important year of my life. I look at it daily that when things get hard [to remind myself that] it’s never as hard as that was.”

Ms. Gallagher has a left her mark during her time at Christian Brothers.  Her compassionate spirit will instead be put to use in a new area.

As one of her previous students, I think I speak for everyone in saying that you will be missed.  The new crop of students is missing out on learning from such an excellent, caring, loving teacher.

Thank you, Ms. Gallagher.  You are loved and good luck in your future endeavors.