Talon writer Charlie Passarell sits down with Christian Brothers teachers and to find out how their College experiences affected their vocations. Ms. Mary Bowers spent a year at Arizona State University before transferring to Loyola Marymount, where she graduated with a degree in communications arts and a minor in English. She then did graduate work […]

Talon writer Charlie Passarell sits down with Christian Brothers teachers and to find out how their College experiences affected their vocations. 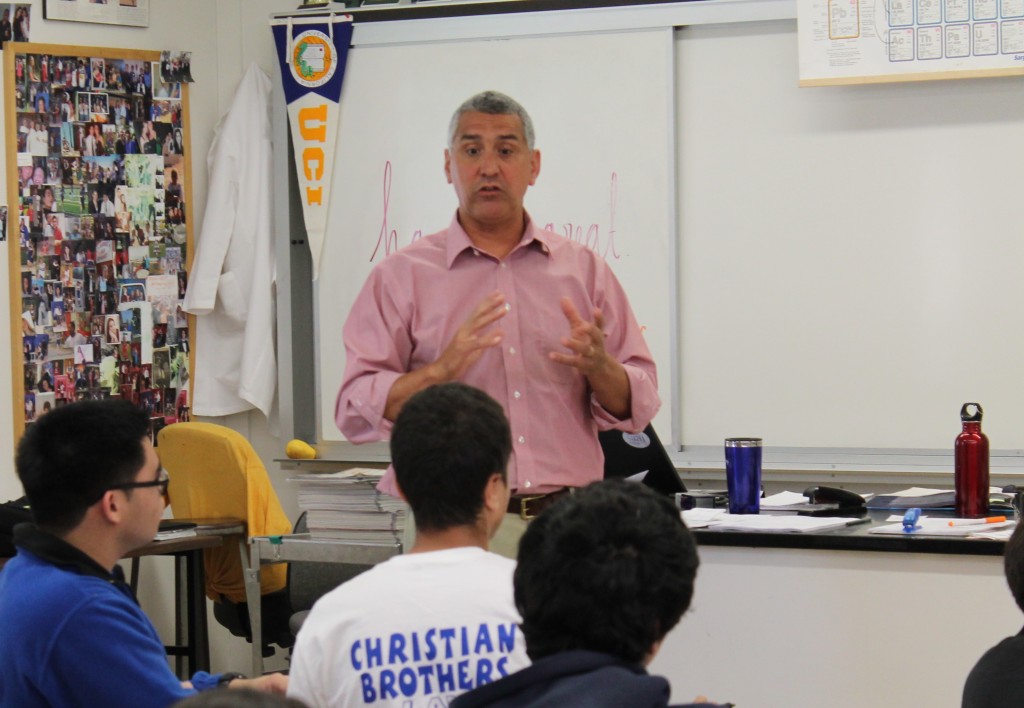 Ms. Mary Bowers spent a year at Arizona State University before transferring to Loyola Marymount, where she graduated with a degree in communications arts and a minor in English. She then did graduate work at San Jose State, before getting her masters at the Shakespeare institute in Birmingham, England.

“It was wonderful,” she says glowingly. “It was fun, it was challenging.”

She also did a year studying abroad before attending college. She says that her year abroad, “pushed the envelopes of my life and made my life a bigger thing and made the world more accessible.”

As advice to students about to enter college, Ms. Bowers says, “be good, go to church, be open to new experiences, and surround yourself with great people that make you a better person.”

Mr. Tomas Capogreco ’86 was an undergraduate at Sacramento State and went to University of Guadalajara to get his masters, before attaining his teaching credential from Chapman University.

He describes Sac State as “a great school.”

“The foreign language department was awesome,” the Spanish teacher says. “I think I got a really good foundation in education there in both general education and my major.”

But, it was Cap’s time in Mexico teaching English that really helped him realize his vocation.

Cap believes that your experience depends more on you than it does your school, saying, “I don’t really think it matters where you go to school, I think its really just the experience you make out of it.”

As advice to students about to enter college, Cap says, “just savor every moment of it cause once its gone, its gone.”

Mr. Danny Delgado ’79 got his undergrad degree from UC Irvine in social science psychology, then got a graduate degree in social work and did additional studies in elementary education at National University.

“It took the skills that I already feel I had, and helped me to bring those out in different ways,” the science instructor says.

College helped bring Mr. Delgado to a new stage in his life.

As advice to students about to enter college, Mr. Delgado says, “stay there, work it out, struggle, use whatever resources are available and build a community around you that will help support you. You can handle it, Enjoy it.”

Mr. Chris Symkowick-Rose went to Creighton University in Omaha, Nebraska. It was a big change for him from his home town of Milwaukee.

He very much enjoyed the general mood of Creighton.

“I fell in love with the atmosphere,” he says, “I loved the feeling of it.”

Even more important was the discoveries Mr. Syr made about his vocation.

“I did a ton of service time in college I spent a summer in the Dominican Republic,” he says, “I took a lot of education courses.”

It was through his service and education courses that he truly began to understand his calling.

As advice to students about to enter college, the religion instructor says to “combine your career with what you love because then you don’t ever have to work.”