Men’s Tennis Racks Up The Wins

Our Falcon Federers are looking to take their game to the next level. Christian Brothers’ Men’s Tennis contains a wide variety of students who have bonded together around this incredibly fun sport. Although the tennis team includes many veteran players, the Falcon tennis squad has also welcomed quite a few rookies to reside among its […]

Our Falcon Federers are looking to take their game to the next level. 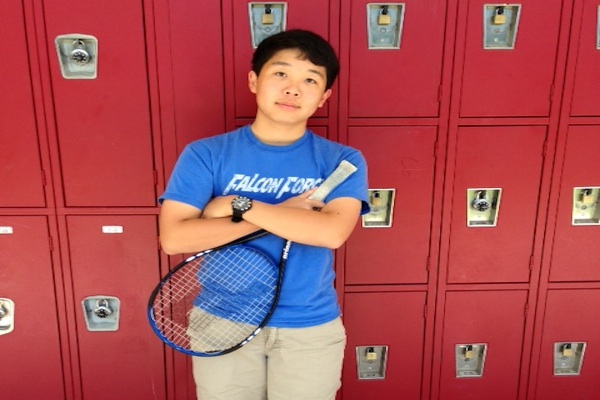 Christian Brothers’ Men’s Tennis contains a wide variety of students who have bonded together around this incredibly fun sport. Although the tennis team includes many veteran players, the Falcon tennis squad has also welcomed quite a few rookies to reside among its ranks.

One of the veteran players is Winston Limhengco (’14). Winston’s years of experience on the court have proven to be a vital asset to the team and his exceptional leadership skills have led him to become on of the team captains.

“My dad used to play tennis as a hobby, so he wanted me to play a sport as well; as soon as I was old enough, he put a racket in my hand and I’ve loved the sport ever since,” says Winston. “My dad’s love for the sport seems to have rubbed off on me and he has been really supportive of me so far.”

Another equally important player is Austin Ryu (’14), who also happens to be one of the tennis team’s rookies. Austin began playing tennis this year, and although he does not have the experience of Winston, he works hard every day to improve his athletic ability.

“At first, I played golf, but after awhile I kind of lost interest in the sport and decided to drop the sport altogether,” explains Austin. “The reason I decided to choose tennis is because my dad encouraged me to take this sport — he used to play tennis back in high school so I felt I should try it out and my first week of tennis turned out to be really fun.”

Even though many think of tennis as a lone-wolf kind of sport, this particular tennis team is laden with helpful teammates that constantly cheer one another on. Pointers from teammates are especially helpful to players such as Ryu who are looking to better themselves on the tennis court.

“Winston Limhengco and senior Matt Haynie (’13) act as our team’s captains and they always give us great advice and they’re very friendly, they tell us to never give up and they never discourage us,” says Austin.

“I usually cheer on the team and give my teammates some pointers whenever I see that they’re struggling with something,” adds Winston.

These two tennis enthusiasts are always trying to improve their athletic capabilities in order to win more games. Through hard work and dedication, many of the men’s tennis players have seen their skills drastically improve.

“Right now I’m playing number one doubles and I like to help my teammate out a lot because from time to time I keep on making crucial errors; one of the errors I make is when I’m serving, I quickly try to smash [the ball] and rush too quickly, causing it to hit the net,” says Ryu.

“Silly errors like this have caused me to lose a couple games, and I really want to work on not making more mistakes.”

Winston has been focusing on the off the court aspect of his game.

“I’ve been trying to go to the gym more to work out, and a lot of tread mill since tennis is the kind of sport that really tests your endurance,” says Winston.

The team definitely has the talent to rack up many more wins in the future. However, they are still short on the players needed to have a complete team. Currently, they have only 11 players and need one more person to boast a complete squad.

“Anyone can pick up tennis, short, tall, old, young, we welcome anyone to join in on this fun sport,” says Austin. “Anyone who seriously wants to join can just come out to Elk Grove Laguna Creek.”

Even though they are short on players, the men’s tennis team does have a closely knit group of players that has confidence in its ability to win matches. Christian Brothers can expect a truly explosive season from men’s tennis this year and will not at all be disappointed by their ever-improving skill.