CB students creatively cultivated unique ways to ask their dates to the biggest dance of the year. 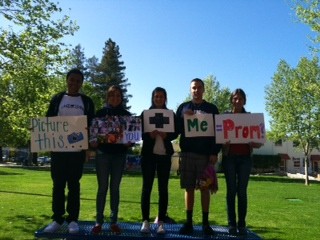 The couple featured in the picture above is Kaytee Marston (’13) and Daniel Lahey (’13).  For most of homeroom, he waited on the middle table of the senior hallway along with fellow seniors Terry Barber (’13), Sarina Munoz (’13), Bernie Swain (’13), and Maria Castro (’13).  After the bell signaled the start of break, the entire senior class watched and waited for Kaytee to react to Daniel’s posters.  Upon seeing them, she broke out in a smile and said yes. 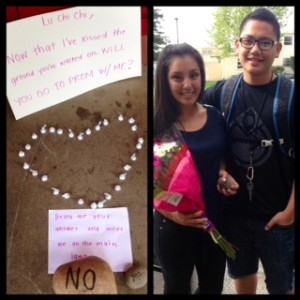 Jacob Roces (’13) asked Lucia Lopez (’13) with candy kisses shaped in a heart and two rocks in front of her locker.  He went old school, kindergarten style telling Lucia to bring whichever rock was her answer.  Jacob conveniently made the ‘no’ rock huge and the ‘yes’ rock small so she wouldn’t be burdened with the weight of the no rock.  Jacob waited a few yards away with a bouquet of flowers and waited for her answer.  She came over right away and handed him the smaller rock and gave him a hug. 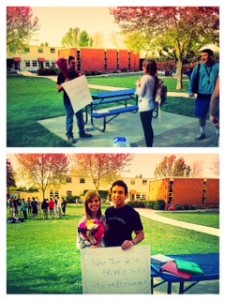 Another adorable ask was between Cory Lutz (’13) and Kate Houston (’13).  The two have a history of going to dances together, but it looks as if this form of asking topped all others.  Cory had a double sided sign, a bag of ice, a bouquet of flowers, and a stuffed-animal penguin.  Kate broke the bag of ice to symbolize ‘breaking the ice’ as Cory’s poster read, and he flipped over the sign to ask her to prom.  He handed her the flowers and the penguin, her favorite animal.  Kate was quite surprised, but she said yes right away. 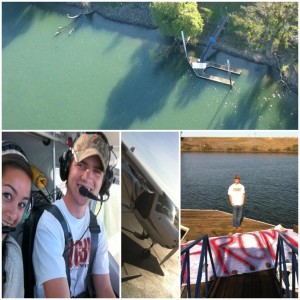 Senior Sam Howard (’13) used his pilot’s license to his advantage.  Over spring break, he used the time to plan out an elaborate scheme to ask fellow senior Sarina Munoz to prom.  After recently gaining clearance to fly people, Sarina was one of the lucky few that he took up in the past weeks.  He flew her around, and when he landed his sign for prom rested on the dock.  He rushed out before her and stood at the end of the stairs waiting for her response.  She couldn’t deny him. 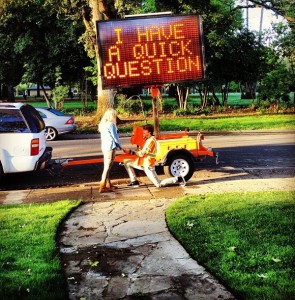 But amongst all the flowers and posters, junior Jenner Chapman’s (’14) electronic sign took the win for one of the biggest and most unique prom questions to date this year.  He preplanned the whole ordeal, telling his girlfriend, Paige Carpenter (’14), that he would take her to school that day.  He pulled up in front of her house in a full blown construction suit outfit.  Donning a bright orange vest, he went down on one knee as Paige walked toward him and read the sign.  It was the prom proposal of the season and the talk of the town among the students for the rest of the week.

It’s sure to be a wonderful evening for all these couples and everyone else in attendance.  To make it an even more magical night, be sure to follow these few simple rules.  Remember this is a formal dance.  Boys must wear a tuxedo or a suit and tie, and girls must wear a formal dress — this means that no short, tight dresses will be allowed.  Dresses with low backs must not reach past the middle of the back and the hemline should be below the knee.

The Talon wishes everyone a safe and sane prom!