Get an insider’s view on the man who has been at Christian Brothers for decades. When Mr. English told me that he has been teaching at Christian Brothers High School since 1979, I thought he was joking. With his wrinkle-free skin, his svelte form, and his luscious locks, Mr. Tom English should be a Cover […]

Get an insider’s view on the man who has been at Christian Brothers for decades. 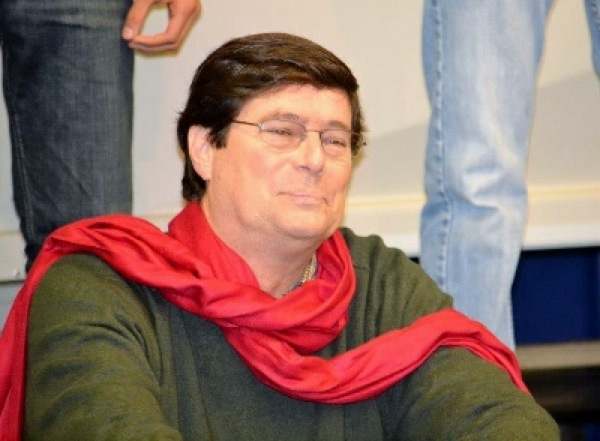 When Mr. English told me that he has been teaching at Christian Brothers High School since 1979, I thought he was joking.

With his wrinkle-free skin, his svelte form, and his luscious locks, Mr. Tom English should be a Cover Girl. It is hard to believe that the teacher has been harvesting his legacy at Christian Brothers for 33 years.

The victim of numerous good-natured jokes, including recently being distinguished as “the Grinch” by Christian Brothers’ men’s chorus, Mr. English is a prized teacher on the CB campus. All students, including those who do not have him as a teacher, watch Mr. English with awe as he walks gracefully through the halls, towering over the students and other teachers.

“I have enjoyed my time here at Christian Brothers,” says the confident Lasallian educator.

“There is not enough information in the history books” says Mr. English in defense of his teaching style, “I can get [the lessons] across better [by lecturing] than by making the kids read extra books and a ton of extra material.”

A historically knowledgeable Mr. English pours out hours and hours worth of information for each chapter of the World History textbook, which takes two years to complete. Foreign names of European Dictators and Ming Dynasty Emperors fill pages and pages worth of notes for students that take his class.

[pullquote]When Mr. English told me that he has been teaching at Christian Brothers High School since 1979, I thought he was joking.[/pullquote]

“I dreaded hearing Mr. English say ‘pull out your notebooks’ because I knew that he would be giving us copious notes,” recalls a studious Drew. “By the way…he would say that every single day.”

The “copious notes,” as Mr. English calls them, have haunted his students for years. While he says it jokingly (at least one can assume –it’s hard to tell if he is joking with his monotone voice), students shake in their seats as they scramble to collect their things. His serious, reserved, and artfully sarcastic demeanor intimidates young freshmen and sophomores.

“I really don’t know why I scare freshmen,” admits Mr. English, “I think it is an image that has been created over the years.”

His daunting nature is not only reflected in the history teacher’s extensive lectures and sarcastic comments, but in his class projects as well.

Each year, while studying Asia, Mr. English pulls out numerous bags of Legos, all meticulously sorted by color, and commands his freshman class to build a model of the Great Wall of China. His restrictions are explicit – there must be a tower every four feet, every aspect of the wall must adhere to very specific dimensions, and the colors cannot be mixed – just to state a few.

But of course, it does not end there – that would be much too easy, and Mr. English does not make anything easy.

Mr. English, who crowns himself the Emperor of China for the project’s two week span, assigns students to social classes via a random drawing. The “peasant scum” are the unlucky students who are not allowed to talk or even sit in a chair for risk of being seated higher than the emperor. The rest of the social classes are progressively better – and smaller.

As if the representation of China is not good enough already, Mr. English also presents the students with a number of simulated obstacles. For instance, portions of the wall are mysteriously destroyed and must be rebuilt every day.

Although the students never actually finish building the wall and the project leaves them even more terrified of Mr. English than they were before, the hands-on knowledge that they unconsciously gain is invaluable.

Luckily, as students grow older and more accustomed to Mr. English’s monotonous voice and sarcastic disses, the freshman fright turns into the utmost respect and admiration.

After one year in Mr. English’s class and three more years of casual hallway conversations, Drew has come to the conclusion that although “some people say Mr. English is a big, mean teacher, he is actually a really nice guy.”

Mr. English is a historical genius with a passion for all things ancient. But the knowledgeable professor was not always so sure about his calling.

Having attended a high school that was evidently missing “Vocation Fridays” and “Vocation Awareness Week,” as we have here at Christian Brothers, Mr. English enrolled in the collegiate path to become a scientist.

“My high school would force everyone into science,” recalls Mr. English discouragingly, “but I hated it. I didn’t want to be a scientist.”

Once he began taking the college science classes, Mr. English started to reconsider his vocation without the input of pesky high school teachers and outside opinions.

“My history teachers in college were fantastic. I learned a lot from them and gained a better understanding of the world.”

Inspired, Mr. English decided to major in history. His teachers mentored him and showed him all of the employment opportunities possible with a history degree. Even so, the young history major had no idea that he would one day become such a novel teacher.

“I started out [teaching a few classes] at American River and Sacramento City Community Colleges and I loved it,” informs Mr. English. “But teaching college is very different [than teaching high school]. In college [the students] are going to do what you ask them to do, for the most part.”

Little did he know that he would soon be in for the shock of his life.

In 1979, Mr. English accepted a position at Christian Brothers High School. The Catholic college preparatory high school was an all-boys campus. That fall, a nervous Mr. English stepped onto campus and taught his first history class to a rowdy group of teenage boys.

“It was very intimidating,” recalls Mr. English, shuddering at the memories of the disorderly scene of a classroom raging with testosterone. “[The boys] played a lot of pranks…you never knew what they were going to try to do.”

Constantly on the lookout for tacks on their chairs or chalk in their erasers, Mr. English and his fellow Christian Brothers teachers “would commiserate with each other, sharing stories and knowing that a variation of that [trick] could happen in our room.” 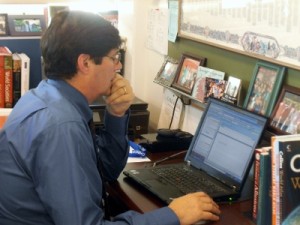 With a career at CB that spans five decades, the hard-working Mr. English doesn’t see an end in sight.

Being unaccustomed to an all-boys school, Mr. English was shocked by the “male intensity” in the classrooms. Students were noisy and competitive. They would do “all sorts of goofy guy things.”

During lunch, the boys would typically join up with their buddies and play sports. The current portable classrooms were outdoor basketball courts and the SMAT building was all grass. The intramural sports program was huge at Christian Brothers in the 80’s, and consisted of numerous sports, all in an effort to release some of the energy that the teenage boys had built up during their classes.

In the absence of girls, the boys were wild and free. It wasn’t until the fall of 1990, when Christian Brothers welcomed transfers from Bishop Manogue High School, that the boys shaped up and became the respectable young men that Christian Brothers fosters today.

“The first year was rough,” recalls Mr. English, “the girls didn’t want to be here and the boys didn’t want girls here.”

However, by the third year as a co-ed school, “you wouldn’t have known” that Christian Brothers had not always been that way.

“The girls brought a sense of normalcy to [Christian Brothers, and] the boys’ behavior altered completely.”

It is safe to say that Mr. English appreciates the calm flair of estrogen that broke up the energetic mass of testosterone.

When asked if he misses anything in particular about the past at Christian Brothers, the wise professor says, “I only miss the kids who [graduate and] aren’t there anymore. Luckily, some of my former students come back and visit me. That is the reward.”

[pullquote] It is safe to say that Mr. English appreciates the calm flair of estrogen that broke up the energetic mass of testosterone.[/pullquote]

As for the school itself, Mr. English says, “a good school is constantly changing. I want to embrace what is to come, [because] the past has its place. [While] the future can bring fear, there is [also] an excitement that comes with change.”

After over 30 years at Christian Brothers High School Mr. English has no plans to retire.

“I don’t know what I would do if I retired. As long as I enjoy teaching and I am doing a good job, I will continue teaching. If I woke up tomorrow and decided that I hated [my job], then I would retire…but that won’t happen.”