Christian Brothers Director of Admissions Mr. Kenny Kirrene and his two sons are carrying on a family legacy that spans generations. Ever wonder why enrollment is growing high at CB? Ever notice little acts of kindness generating throughout our school? The simple answer to these questions flourish from one fascinating legacy: The Kirrene family. We […]

Christian Brothers Director of Admissions Mr. Kenny Kirrene and his two sons are carrying on a family legacy that spans generations. 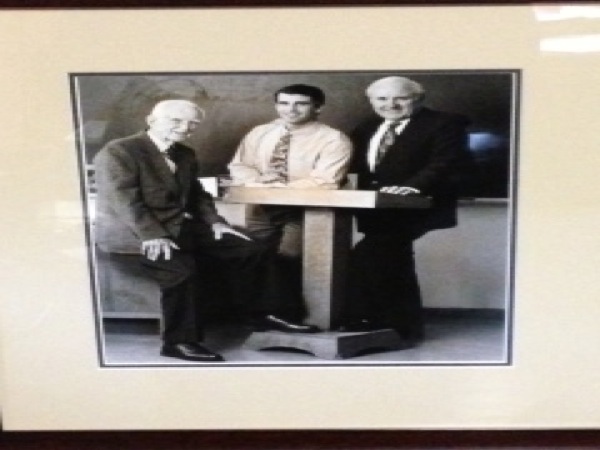 Ever wonder why enrollment is growing high at CB? Ever notice little acts of kindness generating throughout our school?

The simple answer to these questions flourish from one fascinating legacy: The Kirrene family.

We often see Mr. Kenny Kirrene ’78, Director of Admissions at CB, around campus picking up little pieces of trash, welcoming shadow students, and making it a point to greet us all with a warm smile and a firm handshake.

Growing up in East Sacramento for most of his life and attending David Lubin Elementary, Sutter Middle School, and Christian Brothers High School, Mr. Kirrene has established strong and long lasting relationships not only with the community but also within his own family.

When given the ultimatum from his father, of attending either CB or Jesuit, both all- boys schools at that time, Mr. Kirrene assertively said, “Christian Brothers has more of a spirit of diversity and welcoming folks and status is not a concern for me.”

He ended up attending CB and loved every moment of his experience.

When asked how he felt about going to a high school where his grandfather — an honorary alumnus — father and various uncles had attended years prior he quickly answered by saying, “That connection to something much larger than myself was very important to me and I was blessed that various teachers and coaches here knew my family, so I was automatically welcomed into that fraternity of men.”

Following a strong legacy may become overwhelming for some, but for Mr. Kirrene it was quite the opposite.

“I was always blessed with my parents knowing that they loved me and that I was lovable and so I had a confidence there too to take appropriate risks and express myself freely,” said Mr. with confidence.

While attending Christian Brothers between 1974-1978, Mr. Kirrene was involved in student leadership while also carrying on many jobs outside of school, making it very difficult for him to participate in sports.

“I was on freshman through senior class council and senior year I was senior class president,” he said of his extracurricular experience. “I had an opportunity to be involved in government here that had a direct impact on the quality of life of the kids that were here,”

Just as he cherished every moment as a student at CB, he was also very much apart of his older sister’s lives and social friend groups.

“My two [older] sisters were at St. Francis, and I was blessed that my older sisters always welcomed me into their own social life,” he says. “So rather than feeling pressure to perform academically as well as they did, I felt apart of their friends  and I had the opportunity to date my oldest sisters friends.”

After graduating CB in 1978, Mr. Kirrene furthered his education at Santa Clara University and claims that he had never imagined himself coming back to CB.

It was never his direct plan to end up working at CB. However, after he taught at Daniel Murphy High School in Los Angeles without a credential for five years, he applied for a teaching position at both Jesuit and CB.

However, it was in the early ’90s during the riots in Los Angeles, so he could not make the interview at Jesuit. However, a former principal at Christian Brothers, who used to teach at one of CB’s brother schools, interviewed him in Los Angeles and hired him. During that same year Mr. Kirrene worked on his credential at Mount St. Mary’s College Los Angeles.

After receiving his credential at St. Mary’s, Mr. Kirrene came back to CB and worked as a teacher for 16 years.

Looking toward the future and deciding to provide his three children with their own experience as high school students, he eventually took over the position as Director of Admissions at CB.

Just as he had been given the liberty to express himself during his high school years rather than being overshadowed with his family’s accomplishments, Mr. Kirrene wishes to provide his daughter and two sons with the same opportunity.

“I wanted them to be free of the reputation I had established here [CB] as a teacher,” he says.

As an educator and loyal community member of CB, Mr. Kirrene knew it was his vocation to remain at CB by representing our school with dignity and respect.

“This position needed someone that is from the community, who understands people, and who has a desire to create a rich diversity.”

His two sons Kaalen (’13) and Jerett (’15) Kirrene are also strong representatives of the CB community, singing at liturgies, Open House, and various other choral events. They represent our school with high honor and dignity not only because their father is an employee of Christian Brothers, but because they genuinely love and care for the place that has provided them and their family with the highest education.

They not only value their quality education but are honored to be apart of a community where they feel assured that they can truly express themselves through their many gifts and talents.

“My favorite part about going to CB is the feeling of community I get from everyone who goes here,” Kaalen says. “I feel like everyone cares about me as a person and not just a student.”

Caring on such a strong legacy with his great-grandfather as an honorary alumnus, grandfather and various great uncles attending CB has brought much pride to Kaalen throughout his years here at CB.

“I am very proud to be apart of the legacy,” the senior says. “I always thought it was cool to have the tradition of attending CB like the Kirrenes before me.”

When asked how they feel about attending a high school where their father works, they each provided a unique response.

“It’s interesting. My dad is always insisting that whenever I see him around campus that I particularly try to avoid him as much as possible,” Jerett humorously states.

“I have never felt that my family, specifically my dad, have intruded in my high school experience. It has been actually pretty helpful having him there when I need him,” Kaalen continued to say.

Contrary to Kaalen’s outlook regarding “carrying on” a legacy,  feels that he is not carrying on a legacy but rather “embracing his [family] name.”

Kaalen and Jerett have always looked up to their father and value the support they continuously receive from their grandfather.

Kaalen says that his grandfather’s genuine care and interest in his activities as well as frequent life lessons bring comfort to his life. He does not take any moment for granted but rather cherishes every moment he is able to spend with his family.

While maintaining an excellent GPA throughout his four years here at CB, Kaalen has been able to succeed with his passion of music. Both he and his brother are essential to the success of Honors Chorale. On top of his rigorous course load, Kaalen has also added a zero period class called, Vocal Jazz since his sophomore year.

CB has truly been blessed with the presence and contributions that several of the Kirrene’s have made to make our school a success.

Mr. Kirrene leaves us with his humble and profound words of encouragement:

“Really be aware of living each day in the moment and not looking down the road to the time when CB will be something in the past, because what we don’t know at this time is that we truly need to be grateful that we are able to attend a wonderful school with supporting teachers, faculty, and staff as well as our family members who continue to encourage us to reach our highest potential.”