Take a look inside the most competitive, stressful and exhilarating competition at the Student Television Network. 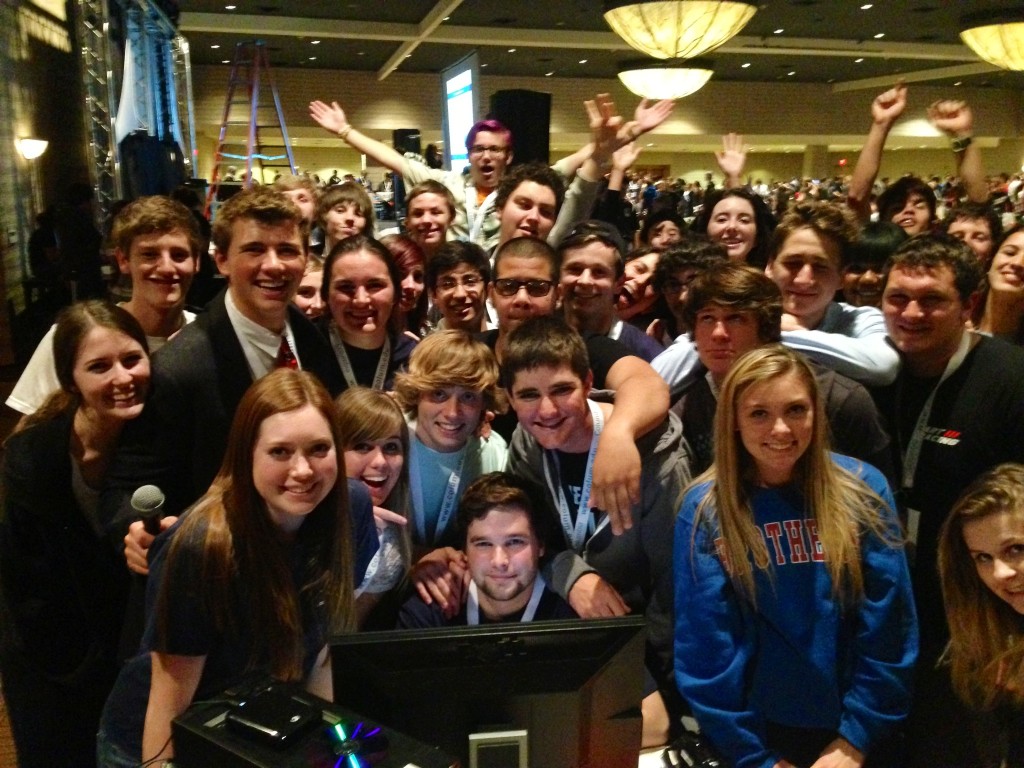 For a decade now, the Student Television Network Convention has hosted middle and high school video production programs from around the nation to compete in grueling competitions. One such competition is the Sweet 16.

For the Sweet 16, teams have 16 hours to create a broadcast centered on a single word you picked at the briefing meeting earlier that morning.  However, schools can also complete a film on the title given to them by the STN officials.  Some schools, such as CB, choose to do both the broadcast and the film, dividing up the students to try and get the best possible content.

KBFT has attended this spectacular event almost every year now, and each year gets better than the last.  Mr. Brendan Hogan ’95 even proclaimed that people created the “best packages in [their lives]” for this year’s Sweet 16.  We even had too many packages, so Mr. Hogan had to “hurt some people’s feelings” as he said.

Upon arriving at the Westin Bonaventure hotel in Downtown Los Angeles, the KBFT students buzzed with excitement knowing the the Sweet 16 was looming.  We grabbed our belongs, unpacked in our rooms and eventually all wound down while Mr. Hogan, Justin Cappello (’13), Alex Daly (’13), and Brianna Pressey (13) went from room to room delivering notebooks we would use throughout the trip.

For the word this year, Alex and Brianna along with Jackson Long (’14) and Emma Bradford (’14) picked the word ‘individuality’ for the theme of our broadcast and stories.  They came down to inform Hogan and the rest of the team before taking their brainstorm groups to different rooms to talk about ideas.

This year, I was put on the broadcast team again and was paired up with Kate Houston (’13) and Kendall Johnson (15). The three of us started out in a brainstorm group along with Jenner Chapman (’14), Tomas Ledesma (’14), Daly, and the Talon’s very own Mr. Dave Anderson ’07.  For about an hour, we tossed around different story ideas, which included stories on the Walt Disney Concert Hall, Gallery Row, tattoo artists, and numerous coffee shops.

Brainstorm sessions are meant to weed out the stories that will more than likely fall through or not work at all.  Of all the stories, Bradford ended up doing a story on a tattoo artist, and Kate, Kendall and I chose to do a story on the local, urban coffee shops.

The three of us called coffee shop after coffee shop hoping someone would allow us to film there.  Most of them told us to call their corporate offices and we scratched those out immediately.  We didn’t have time to wait around for a phone call.  Finally, we found one shop with an exuberant barista who sounded excited about doing an interview.

The three of us grabbed a camera, two microphones and a tripod from Hogan’s room where the film crew was stationed.  We chatted briefly before going separate ways; everyone had deadlines and idle chatter was not ideal in this frenzied situation.

The three of us started our mile trek from the hotel to the first coffee place, Groundworks Coffee.  We chatted about different story angles and what we should ask the barista when we climbed a giant hill where learned there was a road block for construction.

Groaning, we pulled out our iPhones and used the maps to find an alternative root, which put more miles on our odometer and less time on our ticking clock.  After getting lost a couple times, we finally found the shop nestled next to a little eatery.  Kendall and I delegated Kate as our liaison with the people in the shops because we didn’t want to walk in with a camera and tripod and spook them.

Within a couple minutes, Kate came out with a thumbs-up and we know that we just landed our first interview.  We got through that interview understanding that our time must be budgeted every step of the way.  We then made our way towards our next destination, Demitasse, a coffee café suggested by a barista at Groundworks.  We were able to conduct an interview there before we stop to enjoy one of their lattes as well.

As I film, Kate and Kendall start on one of the two most stressful parts of the day: the writing of the script for the voice over.  They come up with good closing lines, but we know we are far from done.

The entire way back to the hotel is dedicated to figuring out what the script idea.  We keep posing ideas, but we either become tongue-tied or the phrasing just doesn’t quite make sense.  As soon as we reach the entry, we make a dash for the War Room a.k.a. the hotel ballroom, where the entire editing process took place. 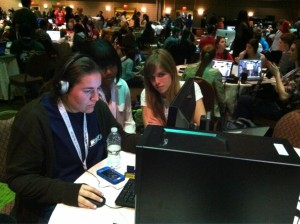 We quickly claim our computer, steal Mr. Anderson from Jenner to help us with the script, and start writing and editing.  As Kate, Kendall, and Mr. Anderson pose ideas and different phrases, I plop myself at the table and start cutting up clips from earlier today.

Seconds, minutes, hours tick by and the stress builds up.  Soon enough, the entire room is filled with schools hustling to finish their broadcasts and films.  At one point, I have to change computers because Andre Le (’13) needs to edit the film on the computer I was previously using.

Ethan Schanberger (’13) had barely moved from his computer as he edited the elaborate intro for our complete broadcast.  This isn’t new to him — he had the same job last year.  People float around him, handing them their videos or telling him that they are almost done.

Finally, we finish the coffee shop video around 7:30 PM which gives us plenty of time to stress out about other people’s packages.  My team goes our separate ways as we attempt to de-stress out before the final hour.

Team after team finishes their video, but Ethan informs Mr. Hogan that we will go over sixteen minutes — the maximum allowed length — if we use all the packages.  Mr. Hogan makes an executive decision to cut some of the packages.  One package doesn’t make the cut because of technical errors while another is cut out completely.

The War Room buzzed with excitement as schools finish.  Each team does something a little different — some do big cheers while others do slow claps.  The energy flows around the room, motivating others to finish.

It’s almost time to export.  The last package we need is Alex and Brianna’s.  Alex has been editing the whole time in his room, but he is cutting extremely close to Hogan’s exporting deadline.

Our team buzzes with anticipation for the final package to arrive.  A mix of emotions runs through the students as we wait for our video to be complete.

The final video is finally placed in the project and Ethan exports it.  The entire team waits around Ethan for the project to finish.  Mr. Hogan covers the screen just in case the time to export is longer than the time we have to turn it into the judges.

Once the editing is done, Ethan slips the USB drive loaded with the completed show into a plastic bag and hands it off to Andrew McGee (’14) who leads us in a cheer that is used by the CB rugby team.

Adrenaline flows through each and everyone one of us as we slowly get louder and louder.  We have finished the Sweet 16 and we have gotten through it with twenty minutes to spare.

Andrew says the final words and we all jump up in excitement.  Hugs and high fives are handed out from person to person even if they don’t know them very well.  The feeling of camaraderie hangs in the air and excitement runs through our veins.

The stress of the Sweet 16 is over.  Most of us will never have to go through something that grueling ever again, myself including. Despite how taxing that competition is, I will miss it.  I will never get a chance to bond with my classmates like that ever again.

Very few times have I felt the strong sense of camaraderie among my classmates as I have when we competed.  We all had one goal in mind: to finish the Sweet 16 and produce the best work we have ever produced.

For the sophomores, juniors and some seniors, they joined Mr. Anderson in experience their first Sweet 16.  When Mr. Anderson attended STN during his time at CB, this competition had not yet been created.  He is extremely impressed with what the crew of KBFT has put together for the broadcast competition.

“I came away very, very, very impressed by everyone’s efforts today,” he explained. “It’s a total team effort. Everyone did a fabulous job.  I was telling [Mr.] Hogan, this is one of the best things KBFT has ever produced. There is a lot to be proud of here.”

Mr. Hogan echoed similar feelings as he discusses the Sweet 16 at the end of the night.

“Almost every single person produced the best package they have every produced.  So it’s all thumbs up from me,” Mr. Hogan complemented.

At the end of the sixteen hours, everyone was ready to go back to bed and get a good night’s sleep.  The stress and anxiety slip far away into the night as we trek back up to our rooms.  The Sweet Sixteen may be over, STN was just getting started.