The Talon‘s Charlie Passarell was a part of KBFT’s team for the STN Sweet 16 Film competition. Hijinks ensued. As Hunter Rappleye (’13) and I chased Lee Berg (’13) for the shot, I heard the one thing I didn’t want to hear. A security guard yelling “Cut! Cut!” The last thing we needed was another blockade. […]

The Talon‘s Charlie Passarell was a part of KBFT’s team for the STN Sweet 16 Film competition. Hijinks ensued. 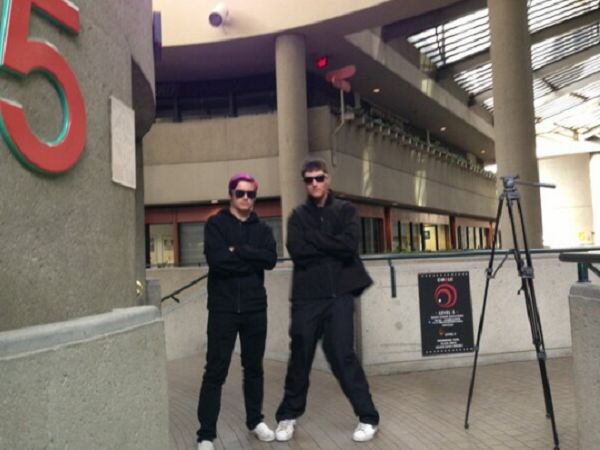 A security guard yelling “Cut! Cut!” The last thing we needed was another blockade.

When Lucas Dudley (’14) and I received our sunglasses and title “My Future’s So Bright, I Gotta Wear Shades,” we immediately ran to the elevator to go get our actors and props. In the elevator, we discovered that we had the exact same idea for the film. It was going to be an action/chase about a person from the future. When we got back to the room, we met with our team of actors and camera men, explained the idea, ironed out some details and began work on a shot list.

We were ready to begin, but then Dudley had disappeared. An excessively confusing hour of us going up and down elevators and missing each other soon ensued. Luckily, we eventually caught each other.

Finally, we began shooting. The first shots took very little time. Then we got to shooting the middle of the story. For the majority of the short, Hunter Rappleye and I are chasing Lee Berg down stairs. This probably sounds easy.

When we finally finished the staircase scene, we had to run out of the building. Once again, not as easy as it sounds.

After multiple takes where the shot didn’t work out, Hunter and I were exhausted. We began the fourth take and ran, out of no where I hear a man shout “Hey! Oof!”

When we stopped, I later asked Hunter if he heard the man. Apparently, Hunter had accidentally run into and knocked over an elderly man during the filming of this scene. Wonderful. I hope he didn’t get a good look at us.

We were filming one of the last scenes in front of a building, while still running. When I hear somebody behind us yell “Cut! Cut!” This was particularly strange because we have never used the term cut during filming. When we stopped, we discovered that it was a security guard, who informed us that we weren’t allowed to film in front of this particular place because, to use his words, there was to be “no filming near da bank.”

I was annoyed, but was compliant, I can’t really say the same for Lucas Dudley, one of our camera men, who stayed and asked the security guard several times, “Where did you get that ear piece?”

The security guard eventually replied, angrily. “At the store,” he barked. I thought this was bizarre, and slowed my walk to hear the rest of the conversation.

“But, really. What store? We need one for a movie”

The security guard was not tolerating Dudley.

I soon realized the Security guard was going to use lethal force to make Dudley leave the property and I think Dudley realized this too because he scurried away at the same time I did.

We finished filming, recorded a voice over to use as an internal monologue and began editing. After a huge slip up in which we lost almost all of our audio, we finally finished and turned in our Sweet Sixteen Film. It was only 3 minutes, but so were some of the winning ones from part years, so we weren’t worried.

It wasn’t until we got home that we realized we had probably been disqualified because we rendered in the wrong format, used music from the wrong website, and filmed on locations that were off limits according to the competition.

But hey? It’s the journey, not the end point.

At least that’s what I keep telling myself.