Don’t go up and ask them to walk the dog — ask them to show you their Spirit Bomb. Christian Brothers has a great diversity of clubs.   There are ethnic clubs, sports clubs and academic clubs. There are also clubs for many particular hobbies. One such club is the Yo-Yo Club. The Yo-Yo Club is […] 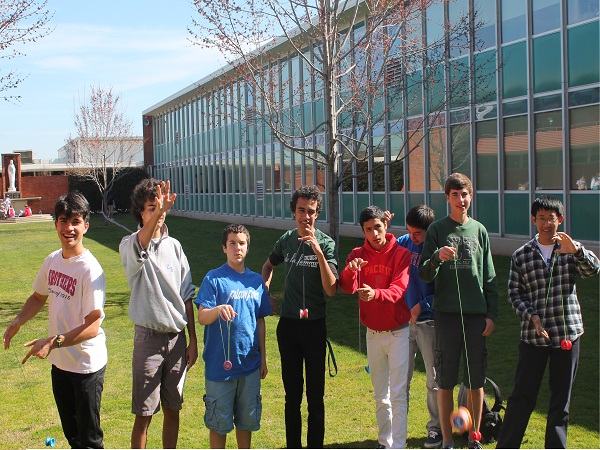 Christian Brothers has a great diversity of clubs.   There are ethnic clubs, sports clubs and academic clubs. There are also clubs for many particular hobbies. One such club is the Yo-Yo Club.

The Yo-Yo Club is a for anyone interested in learning the skills involved in performing tricks with a yo-yo.  There is a surprising amount of tricks that can be performed — if you are good enough.

The Yo-Yo Club is more than just a gathering of skilled yo-yoers; it is a gathering of friends. The members of the club have come to know each other over the year as they teach each other and show off the cool tricks they have been practicing.

The club is very popular among underclassmen. More than half of the club is made up of freshmen and sophomores.  Freshmen Carlos Serrano (‘16) and Elmer Lizarde (‘16) described there experience learning of the club.

“On club day I saw some people throwing their yo-yos and doing crazy tricks and I decided, I want to do that,” says Elmer, who walked into the club with absolutely no yo-yo experience.

“When I started I couldn’t even get the yo-yo to come back up.”

Elmer now considers himself one of the more advanced members of the club.

Carlos had a different experience.

“I saw the club on Club Day and remembered that I had a yo-yo at home, I decided to check it out,” he said.

Carlos came in with his experience and was able to immediately get into the flow of things.  He is an important teacher to the other members of the club.

Both of them agree that the Yo-Yo Club is a great place for beginners and experienced yo-yo enthusiasts.

The club is open to anyone and is always looking for new members.  If you are interested in learning how to yo-yo contact club officers, Kaalen Kirrene (’15) or Jerret Kirrene (’13), or stop by the Mary Lawn during all school lunch.

The Yo-Yo Club has been going strong for over four years and hopes to continue for many years into the future of Christian Brothers.