The KBFT studio holds a lot of special memories for Mr. Hogan. Mr. Brendan Hogan (’95) is known for not having the neatest of rooms. However, it is definitely filled with interesting knickknacks, each holding a different story.  Let’s take a look at a few of the things that may catch your eye as you […]

The KBFT studio holds a lot of special memories for Mr. Hogan. 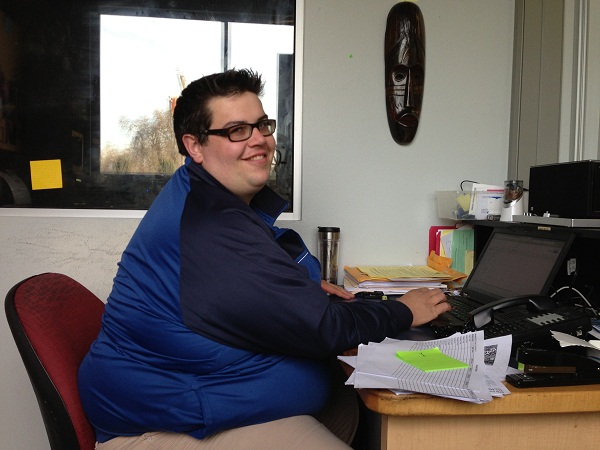 Mr. Brendan Hogan (’95) is known for not having the neatest of rooms. However, it is definitely filled with interesting knickknacks, each holding a different story.  Let’s take a look at a few of the things that may catch your eye as you spend more time in KBFT. 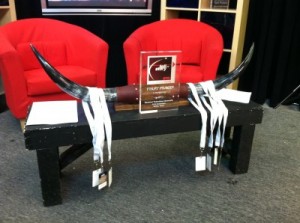 One of the very first things you see when you walk into the KBFT classroom is the huge bull horns hanging above the control room with all the white lanyards adorning the horns. The horns are from last year’s Student Television Network (STN) which took place in Dallas.

“They wanted me to buy these horns as our souvenir,” Mr. Hogan explained.  “I said no [unless someone] wins first place [in a competition].  Sure enough, the next day Alex Daly (’13), Brianna Pressey (’13) and Ethan Schanberger (’13) won first place for the News Commentary [competition].  As a tribute to everyone who went on that trip, we hung our name badges on the horns.”

The next pieces of KBFT lore lie in the control room.  Here, there are multiple objects that capture the eye of visiting students. 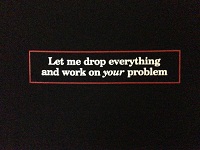 The first thing people see when they walk into the room is the T-shirt that says “Let me drop everything and work on your problem.”  For Hogan, this shirt perfectly describes what a producer goes through when preparing for a show.  It’s that person’s job not only to work on his or her tasks but also fix everything when it seems like it’s going to fall apart.

“[The t-shirt] is a perfect sentiment for what it feels like to produce a show,” Mr. Hogan described. “It really fits with the whole mentality of KBFT.”

When exiting the control room, there’s a flag hanging right above the door.  Not everyone notices it, but if you do, you’ll definitely get a laugh out of it.

The flag was given to Hogan by Mike Sanchez (’06) a student from his first year of teaching at CB.  Mike got it while at STN in Anaheim and gave it to Hogan because he thought it was a funny way to motivate people.

until it gets better,” Mr. Hogan said.  “We give them positive ways to fix it, but we rag hard on the bad stuff.  ‘Beatings will continue’ is on the same vein as ‘I’m going to tear your packages apart until they get better.’”

The next place you’re bound to go into is Mr. Hogan’s office.  At first glance, you may only see the ruffled papers, the two computers, or stray camera parts lying around. But if you look close enough, there are certain pieces that beg you to ask about them. 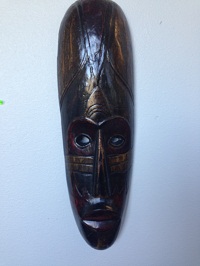 The first thing you see when walking into his office is a huge wooden mask that hangs there staring at you  The mask came from his father-in-law, who gives him a mask practically every year for either Christmas or his birthday.  The tradition of buying masks for  Mr. Hogan started when his mom and sister went on vacation and realized how it was hard to buy him gifts. 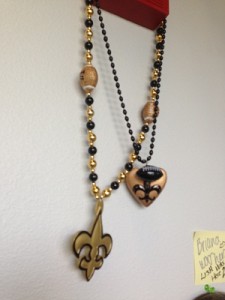 If you look a little higher, two Mardi Gras necklaces hang there with the New Orleans’ Saints symbols on them.  Mr. Hogan calls them his “who-dat chains.”

“When I went to New Orleans for Venaver, one of our service projects was to recycle used Mardi Gras beads,” stated Mr. Hogan.  “They said you could take any beads you wanted, and it was also the year the Saints ended up winning the Super Bowl.” 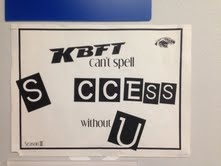 Finally, as you are about to exit the magnificent studio, a sign probably catches your eye.  It’s a little motivational poster left from when Brother Roch Dufresne started the program.  If you look closely enough, you’re bound to see a couple of them hanging around inspiring tomorrow’s future photojournalists and editors.

“Those are some of the last few remaining things from Brother Roch,” Mr. Hogan said.  “Those went up his first year [because] he liked to print out motivational posters for the students.”

Next time you’re wondering what exactly goes on in KBFT, stop by because you’re bound to hear a couple stories on what lies in that room.