Falcon Of The Week: Emma Lee

This CB junior competes in a sport most of us only see in the summer Olympics. Emma Lee (’14) is tackling her junior year of high school and beginning to look at colleges like most of her peers.  But, this junior stands out because she is also recovering from a major injury and working her […]

This CB junior competes in a sport most of us only see in the summer Olympics. 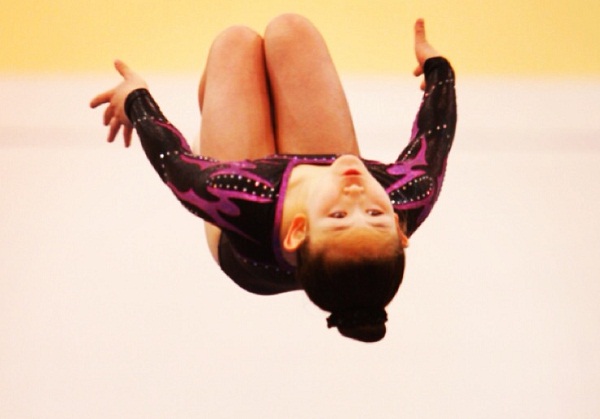 Emma Lee (’14) is tackling her junior year of high school and beginning to look at colleges like most of her peers.  But, this junior stands out because she is also recovering from a major injury and working her way back into competitive gymnastics.

The 16-year old she has been active in the sport for nearly 13 years.  Skiing, ice skating, and gymnastics rounded out her world until fifth grade, when Emma dedicated herself solely to the gym.

“Everyday I practice for five hours, and that’s six days a week,” she says. “Sunday is the only day I ever have off.”

Emma says her favorite events to participate in are vault and floor, and she loved watching the U.S. team compete in the London Olympics this past summer, especially after attending the trials where the team was selected.

“Being with friends and having that team experience” are major pluses for this dynamic athlete, which is a good thing since she spends nearly 30 hours a week with them.

“We compete from December through May and we have at least three meets we have to fly to.  Most are local though, and first they give you designated times,” the junior says. “It takes more than four hours for the whole thing, with an hour for each event.”

That’s not to say that there aren’t steep costs associated with gymnastics.  Emma gets home around 9:30 P.M. and admits, “I am usually up until about 1:00 A.M. doing homework.”

Also, the sport can be dangerous. Recently, an accident on the vault sidelined her from not just competition but all activity.

“I was on vault, and I was doing a round-off onto the board, back handspring onto the vault table, and then a one-and-a-half twist.  I landed in a deep squat and my knee popped out and back in, and I tore my ACL.”

Average recovery from the surgery Emma had takes more than nine months.  But the dedicated teen’s determination to return to the gym is driving her healing process forward and she should be back practicing by April.

Despite her time out in what she calls “a critical year,” the University of Washington still wants her to come compete on their team in college and she says she’ll likely attend school there after graduation.

“I would want to go to the Olympics, but I just have to say I’m not — it’s not possible for me at this point,” Emma says, citing that she will probably be too old to compete.

Once Emma can no longer participate in a competitive setting, she hopes to pursue a career in sports medicine, nutrition, or a field related to personal health.

Until then, she will continue to be a hardworking student both in the classroom and at the gym, setting a shining example for her peers in both places.

To check out Emma in action, visit her YouTube channel.