Five CB athletes commit themselves to top-notch schools. National Signing Day took place Wednesday, when five Christian Brothers athletes placed their signature on the dotted line and pledged where they will play their sport at the college level. Hunter Rappleye (’13), Andrej Bevins (’13), Vinnie Johnson (’13), Ana Burch (’13), and Omari Gray (’13) were […] 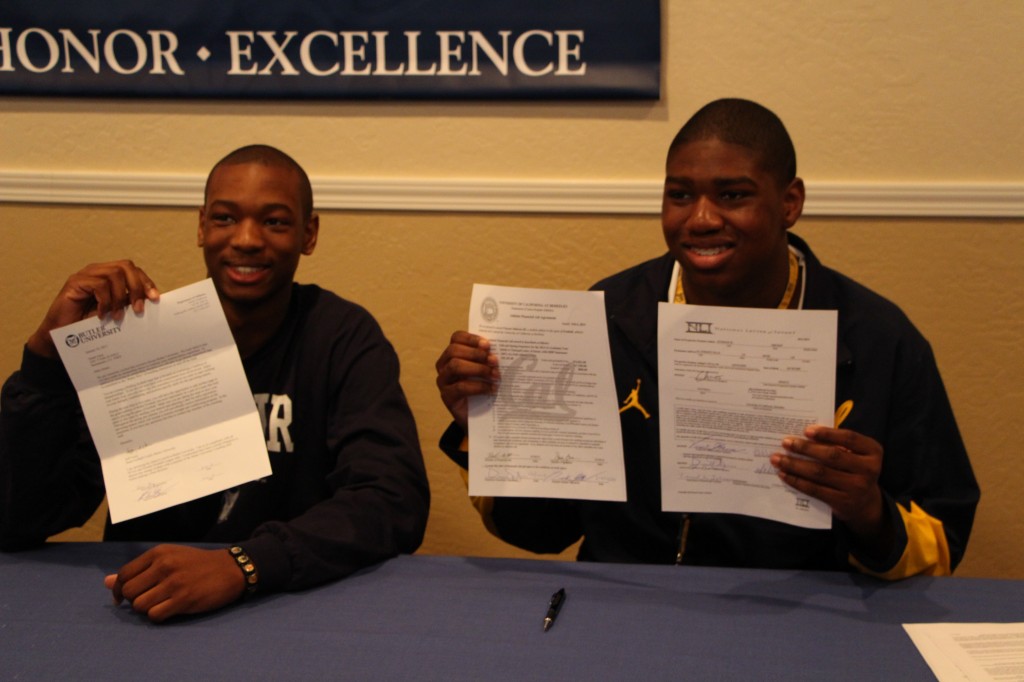 National Signing Day took place Wednesday, when five Christian Brothers athletes placed their signature on the dotted line and pledged where they will play their sport at the college level.

Rappleye will be going to St. Mary’s College for golf, while Bevins will golf at the University of New Mexico.  Ana Burch will play basketball next year at Cal State Stanislaus.

The other two athletes in attendance, Johnson and Gray, will both play football in the fall of 2013 for UC Berkeley and Butler University, respectively.

Johnson played football all four years at CB.  Over the course of his career, he dedicated hundreds of hours of hard work to get to the position he is at now.  He even admits that he did not think he would be in the position he is today, regarding college scholarships.

Since August, Johnson was planning on attending Iowa State.  He visited the school and absolutely loved it, which made his next decision that much harder.

“Iowa State was one of the only offers,” Johnson stated.  “[But] Toward late December, early January, it started getting difficult because I had to make a decision between Cal and Iowa State.”

Once Cal showed interest in him and made him an offer he could not refuse.  Johnson broke his pledge to Iowa State, a decision that was extremely hard for him to make.

Teammate Omari Gray also made a big decision yesterday about his future. 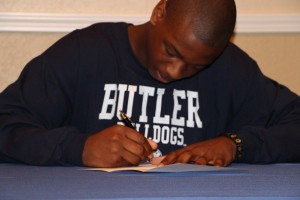 Since the seventh grade, Gray has put in the effort to play football at a collegiate level.  After receiving awards such as Offensive Player of the Year and All-Conference for the Capital Valley Conference, Gray earned the right to sign with Butler University, a NCAA FCS school in Indianapolis.

Gray not only impressed Butler, but he also impressed the Team Stars and Stripes, a team that represents the United States in international football competitions.  They have offered him a spot to play in Paris later this month against other countries with the U-19 team.

“[The offer] was amazing,” Gray said, exuding complete joy and happiness.  “I read the e-mail and I had to read it over again, [as if] I wasn’t reading it right.  It was breathtaking.”

For Gray, the recruiting process was not as hard as Johnson’s.  His father helped him create “a decent film [to] send off to colleges [via YouTube].”  He had a couple offers, but once Butler came around, he knew exactly where he wanted to go.

“I mostly chose the school for academics, not just football,” explained Gray.  “I felt that it was my best fit and I really liked it there on my college visit.”

Johnson and Gray have tips for prospective athletes that are looking for a scholarship in sports.

“Put in the work,” stated Johnson.  “That’s what matters.  I wasn’t a very good player my freshman year, and if you ever saw me play football at that point, you would have thought that this kid wouldn’t amount to anything.

“You have to stick with it, not matter how hard it gets, and keep putting in the work and everything will pan out well.”

Gray preaches the same sentiments as his teammate.

“No matter what, just keep training,” Gray said.  “It will pay off eventually.  Always keep in contact with coaches and schools that you want to go to.  Send out your film and show that you have something to offer.”

Gray had one last thing to add that applies to all players, from freshman to seniors.