War On The Floor

One CB senior’s wrestling skills has taken her on adventures abroad. While most seniors are worried about moving away to college, senior wrestler Mallory Velte (’13) worries about whether or not she will be wrestling in Canada next year. After wrestling at CB all four years, she has college offers pouring in from numerous colleges.  […]

One CB senior’s wrestling skills has taken her on adventures abroad. 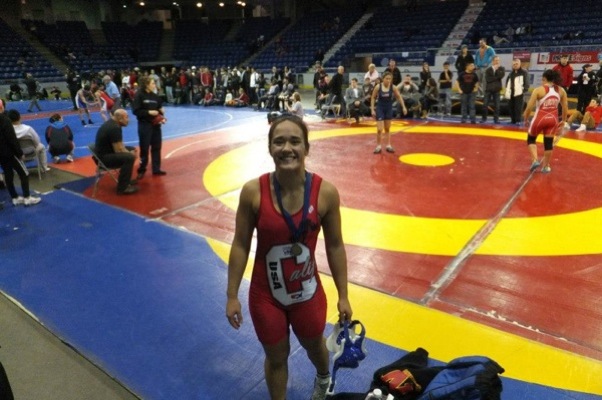 While most seniors are worried about moving away to college, senior wrestler Mallory Velte (’13) worries about whether or not she will be wrestling in Canada next year.

After wrestling at CB all four years, she has college offers pouring in from numerous colleges.  Last year, she went all the way to the State Championships and won in the 132-pound weight category.  The banner proclaiming her title proudly hangs in the Ron Limeberger Gymnasium, reminding all students that they can make it to that level.

For four years, Velte has put in thousands of hours of work.  When she’s not at school, she is either working out with her other wrestling friends from other high schools, attending wrestling camps, or working out on her own.

Assistant wrestling coach and science teacher Mr. Bernie Eckel, credits Velte for all her hard work, stating why that makes her such a good captain.

“Mallory [is] an extremely hard worker when she shows up to practice,” Mr. Eckel explained. “She’s captain of the team this year.  We believe that a good captain shows by example, not by what they say.”

Mr. Eckel says Velte’s determination and leadership abilities are the reason why she is the perfect candidate for head captain and a good role model for the rest of the growing wrestling program.

“When we do pushups, she does them to them her fullest extent which means she does all of them and does them perfectly,” elaborated Mr. Eckel.  “When she’s wrestling, she always goes out and gives it 100%.; it doesn’t matter if she loses.  When she asks the other wrestlers to do something, she never asks them something she wouldn’t do herself.

“She’s always trying to encourage for the off-season for wrestlers to go other camps for next year even though she won’t be here next year,” he added.

Since joining the team in 2009, the amount of female wrestlers has grown a bit and the men’s side has grown even more.  However, Velte hopes that her success has changed people’s perceptions of females in the sport.

“Hopefully, [the program has] changed people’s opinions of what a female wrestler is,” Velte said.

Over Christmas break, Velte went to go visit Simon Fraser University, a NCAA Division II school in Vancouver, British Columbia,who is willing to give her a scholarship for wrestling.  While up there, she competed in a wrestling tournament, “War on the Floor”.  She captured  victory in all four of her matches, taking first place in the tournament

The next thing Velte has to do is pick a college.  She likes Canada because she feels that it “support[s] their athletes, especially the female wrestlers.”

Velte has high hopes for the short term as well as the long term.  She has her goals placed and knows where she wants to go in life.

“[By] my sophomore year [in college-, it’s my goal to become a college national champion,” Velte explained.  “I would like to join the national team. I would want to become a world team member, and possibly live at the training center with the pursuit of the Olympics in 2020.”

As Velte comes to the end of her career at CB, she never imagined winning state championships or having colleges offer her scholarships left and right.

“It has been a journey,” the humble wrestler said. “I never would have thought I would be where I am now.”