Members of Christian Brothers’ spring sports teams are relentlessly preparing for their upcoming seasons. Christian Brothers’ track, lacrosse, men’s volleyball, rugby, and baseball squads have been hitting the weight room over the last several weeks to reach top form in time for the beginning of their seasons. The Talon sat down with with Falcon athletes Matt Wong […] Christian Brothers’ track, lacrosse, men’s volleyball, rugby, and baseball squads have been hitting the weight room over the last several weeks to reach top form in time for the beginning of their seasons.

The Talon sat down with with Falcon athletes Matt Wong (14′) and Thomas Bates (14′) to gain an insight into what type of workouts Christian Brothers’ spring athletes are doing  and how their workouts are improving their ability to perform during competition.

Bates, a 3rd baseman for the varsity baseball team, has been a committed attendee of baseball workouts and practices over his two years at Brothers.

In order to keep their rhythm and steady progress, CB’s baseball team runs a program during every season of the year. As the regular season approaches for the baseball team the players are picking up the pace of their work.

“We’ve been conditioning for about three weeks now,” Bates remarks.

A rigorous lineup of workouts on the white board greets CB’s baseball players as they enter the campus weight room. Christian Brothers’ trainer from the Results Fitness Center has concocted a physically and mentally taxing workout rotation for the baseball boys to carry out four days a week.

Bates believes the program is helping his team develop the tools it needs to have a successful season.

“We do a lot of lower body work and it really helps with power and hitting,” he says

Though Wong and the Brothers’ rugby squad have conditioned for only two weeks, he believes that the intensity of their workouts have thoroughly prepared the team.

“The conditioning for rugby was shorter but much much harder than in previous years” Wong tells The Talon. 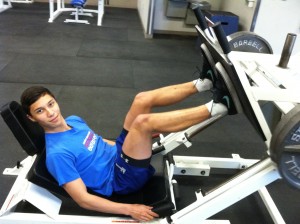 In prior years the rugby team would split time between running on the track and lifting weights in the weight room.

This year the team has focused of high intensity running sessions.

“We went on extended running sessions. We would run for four hours at a time,” Wong says.

The team’s strenuous cardio workouts grant it an advantage of one of the more in-shape rugby teams in the area.

But the rugby and baseball teams are not the only teams on campus doing preseason workouts.

CB’s men’s volleyball, women’s lacrosse, and track and field squads have been hard at work too.

Since early December athletes from the aforementioned teams have been following workout regimens similar to those of the baseball team.

Twice a week CB’s Results Trainer equips the spring athletes with bigger muscles and stronger bodies. As CB’s athletes dig into the grind of their seasons they will see their strife in the off-season come to fruition.

By participating in these workouts athletes not only prepare for this upcoming season, but for the rest of their lives.

Exercise is a pivotal component of lifelong health and these athletes are learning how to treat their bodies with care. Regular exercise will allow these students to live long and full lives in good health.

Christian Brothers’ spring athletes are acquiring skills via conditions that will prove invaluable on the field of play and throughout the rest of their lives.