Falcons Of The Week: The Fab Five

A look inside the mind of the five freshmen on CB’s Women’s Varsity basketball team. Christian Brothers Women’s Basketball team is known for making a statement.  Last year, they when 10-0 in league, made it into playoffs, and made it out of the first round of NorCal Playoff as well. This year is no different.  […]

A look inside the mind of the five freshmen on CB’s Women’s Varsity basketball team. 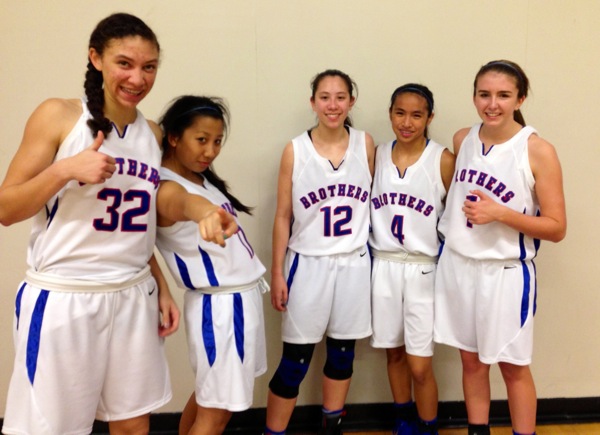 Christian Brothers Women’s Basketball team is known for making a statement.  Last year, they when 10-0 in league, made it into playoffs, and made it out of the first round of NorCal Playoff as well.

This year is no different.  Five freshmen have been added this year to the roster to replace our three outgoing seniors.  Our fabulous five are Sam Earley (’16), Mia Berenguer (’16), Dom McNeely (’16), Nikki Washburn (’16), and Giselle Cantiller (’16).

While being up on varsity may be fun, all of the girls knew it would be stressful and hard playing against teams stacked full with seniors and juniors.

“It’s very stressful sometimes because the older players have a lot more experience and you don’t want to mess up when you’re playing,” Mia said.

Dom added, “It’s very, very exciting but hard at the same because you have the least amount of experience on the team.”

The girls recognize that being pulled up will only make them better in the long run.  It will improve their skills and make them more confident as the years go by.

“It’s been very challenging,” Nikki stated, “but I think it’s great because I get to play against better players [thus] it will make me a better player.”

“It’s really nerve racking because of the pressure put on you by your teammates and your coach,” commented Giselle.  “But in the long run, I think that I will get used to it because it will help me do better.”

For most of the girls, they named a common mentor on the team, Ana Burch (’13).  Ana led the team last year in points, rebounds and steals.  She is not only a leader on the court, but off the court as well, coaching from the bench or even before practice.

“[The biggest mentor has been] Ana Burch,” Sam explained.  “On the court she tries to help me out by giving me tips when I mess up or when I do something good, she’ll give me a good job or [another compliment].”

“[The person who mentors me the most is] probably Ana,” stated Dom.  “When I make mistakes, she doesn’t yell at you.  She tells you what you can do to be better and that it’s okay to make mistakes.”

For all the girls, it was a unanimous response regarding what their fondest memory was of the season: beating St. Francis.

“[My fondest memory is] beating St. Francis because it was my first Holy Court game,” said Sam.  “It was really awesome beating them since they’re St. Francis, our rivals.  It was pretty awesome having my first game on varsity as a freshman beating them.”

“Beating my St. Francis was a really great [memory],” Nikki stated.  “I mean crushing them by 39 points; that was a good one.”

These freshmen are already having a positive impact on the team.  Be sure to come out and support them as well as the rest of the team as the season continues.