Technology In The Classroom: CB Preps For iPad Program

Christian Brothers is planning to put in place a new program that will revolutionize learning. Technology is everywhere and is involved in almost every aspect of our day-to-to lives. But there is one place where technology has yet to completely take hold: the classroom. Even though here at Christian Brothers we have a library with […]

Christian Brothers is planning to put in place a new program that will revolutionize learning. 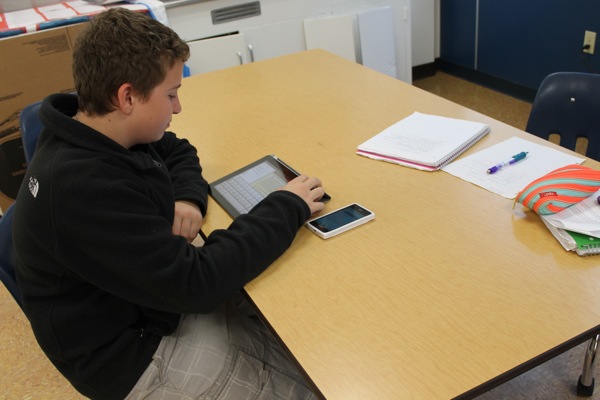 Technology is everywhere and is involved in almost every aspect of our day-to-to lives. But there is one place where technology has yet to completely take hold: the classroom.

It was just recently announced that CB will launch its own 1:1 iPad Tablet Device Implementation program beginning in the 2013-2014 school year, exposing both teachers and students to the possibilities of using technology in the classroom.

Although some are skeptical about what the iPad will bring to the classroom in terms of educational value, CB faculty members like Mr. Christopher Symkowick-Rose are excited about what the future has in store.

As Assistant Principal of Curriculum and Chair of the Technology Task Force here at CB, Mr. Syr, as many students refer to him, believes that the use of iPads in the classroom can truly enhance the learning experience here at CB.

“[These devices] have the ability to revolutionize the way we learn dramatically,” the enthusiastic faculty member explains.

Also an avid iPad user himself, Mr. Syr sees how iPads can transform the way we learn, but still keeps in mind that the addition of these devices in the classroom doesn’t mean it should replace teaching in general.

“iPads don’t teach you anything,” says Mr. Syr, reminding us that “they are [simply] a means to engage students in different ways [and] tap into student creativity.”

Many teachers are worried about the distractions an “entertainment” device like the iPad will bring into the classroom, but Mr. Syr believes that it “[won’t] be dramatically different in that regard.”

Students get distracted all the time, even without access to iPads in the classroom. Whether they are doodling, checking their phones, or just simply not paying attention, it is hard to fully engage students in classroom activities.

As a student and an iPad user, CB sophomore Frank Huntington (’15) can also see why some teachers may have some reservations with the daily use of iPads in the classroom.

“For me, it’s really not [an issue], but I can definitely see why it could be,” says the outgoing student.

Admitting that he is “kind of a technology nerd,” Frank is known for using his iPad in class quite frequently and can definitely see the value of all students using one as well.

“I love using [my] iPad in class,” he says,  adding that he appreciates  the fact that with the iPad he “can type a lot faster than [he] can write.”

Frank is not the only student here on campus that has had the opportunity to use an iPad or other computer devices in the classroom.

Last year we were introduced to both the Google Chromebooks and the Apple iPad as part of a CB pilot program that aimed to figure out which device would work best in our school. There were many factors that led to CB choosing the iPad over the Chromebook, but according to Mr. Syr, what it eventually came down to was the fact that the iPad “can do more.”

The Chromebook is essentially a mini-laptop and its biggest advantage is that it has a keyboard, which sets it apart from the iPad. Though there is value in having an actual keyboard, Mr. Syr and other members of the Technology Task Force feel that the iPad is a more flexible device.

As part of the program myself, I had the opportunity to use the Chromebook in a classroom setting. While I am an owner of an iPad and enjoy the various qualities it has to offer, I grew fond of the Chromebook’s simplicity and its keyboard while participating in this program.

One thing that sets the iPad apart from the Chromebook is that it can be used as a reader as well as a laptop, minus the keyboard. Even though he feels that iPad is considered an entertainment device, Mr. Syr still believes that “it is also an incredible learning tool,” if it is used properly.

Many students, like Frank, are technologically savvy and know how to use an iPad; but many students still do not use these devices for educational purposes as often as they could. This is where Librarian and Educational Technology Specialist Ms. Diane Mahan comes into in the picture.

As CB’s new librarian as of this year, Ms. Mahan sees students using technology all the time. Whether it be using their phones, iPods, or working on the computers, students seem to always be technologically connected.

“Students are growing up with technology,” she explains, so it makes some sense to make it part of the curriculum.

Ms. Mahan believes that “if you can use technology interactively, it can [enhance] learning,” which is the idea behind CB’s planned iPad-based class.

Though this is still in the planning stages, the plan next year is to have a class where students are doing interactive learning with the iPad. As a result, students will be able to help other students , and possibly even faculty members, use their iPad effectively.

“We want students to become tech support for other students,” the enthusiastic librarian says.

Along with other CB teachers, Ms. Mahan also sees the complications that will arise once CB enters the iPad program because it’s “different from the norm.”

Making the switch from a “normal” classroom to an iPad-based classroom is something many teachers, and even students, are not accustomed to.

Ms. Mahan feels that  since “kids are using technology in other ways than we [adults] do, [it] makes teachers [feel] uncomfortable.”

Some teachers may have fears that the iPad will, in effect, replace the entire curriculum but Ms. Mahan says that this is not necessarily the case.

“[Teachers] have to be careful to not let [the iPad] control the curriculum,” she says, while stressing the importance of a “hybrid” classroom where these devices are integrated into the overall curriculum rather than replacing it altogether.

As a Sophomore Literature and Composition teacher here at CB, Mr. Dave Anderson ‘07, also sees advantages of integrating the iPad into his curriculum.

A couple months ago Mr. Anderson and a few other CB teachers had the chance to go to San Francisco for a technology education conference, where they got to meet other teachers from different schools who are planning to or are already using iPads in the classroom.

While at the conference, Mr. Anderson started to see the full potential of the iPad and began to think about the how he will integrate the device into his class next year.

“There’s a lot of possibilities for the iPad [and] I am planning to do a lot of things with Google forms and Google docs and just the whole Google suite,” he explains.

With the integration of Google docs, Mr. Anderson also sees the environmental advantages of the iPad, saying that “it will save the school a ton of paper.”

The iPad, or any other computer device, will allow CB to dramatically lessen the amount of paper it uses on things like handouts.

Another advantage Mr. Anderson sees in using the iPads along with the whole Google suite is that it will “help with the accountability of students,” in respect to them being given assignments or handouts. He feels that it will eliminate excuses like “Oh, I lost it” because it will always be on Google docs or on their iPad.

Though Mr. Anderson is an enthusiastic supporter of the iPad movement now, this was not always the case. When he first heard about the device he didn’t think much of it.

“My first thought was ‘Why not just buy a Laptop?’ because it can do a lot more,” he reveals.

After using the iPad more and more, he began to realize what it can really do but still sees the complications that it may bring.

He feels the same as many teachers do in the regards that iPad could become a huge distraction in class but that is not necessarily his main concern.

Being a Sophomore teacher, he notices how forgetful students, especially the underclassmen, can be.

“I am concerned about [students] maybe losing or misplacing [the iPads] and not realizing the value of the property because they are very expensive,” Mr. Anderson explains.

Though he has his concerns, Mr. Anderson still feels that “it is good that we are going in this direction [because] this is the way the world is going.”

While there are an array of issues that could arise from using a computer device in the classroom, the pros seem to outweigh the cons. Whether are not you are a strong supporter of the iPad program, it is clear that Technology will continue to be an integral part of our lives and that students should learn how use it to its fullest potential.