CB and Jesuit played a thriller at Ron Limeberger Gymnasium on Saturday night. The Christian Brothers’ Men Varsity Basketball took on the Jesuit Marauders this past Saturday at home in front of a sellout crowd, but unfortunately could not come out with a win, as the Marauders edged out a 71-64 win. The Marauders led […]

CB and Jesuit played a thriller at Ron Limeberger Gymnasium on Saturday night. 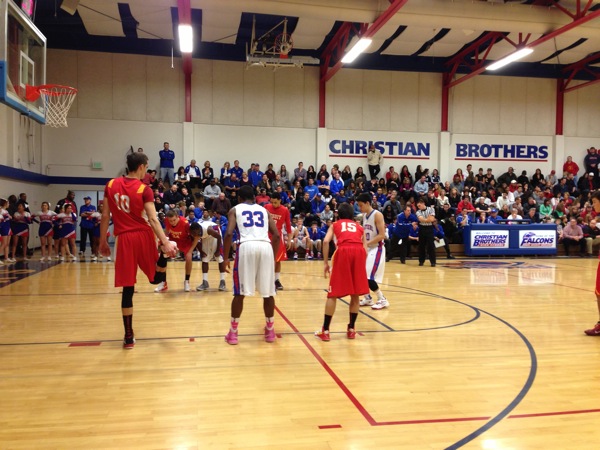 The Christian Brothers’ Men Varsity Basketball took on the Jesuit Marauders this past Saturday at home in front of a sellout crowd, but unfortunately could not come out with a win, as the Marauders edged out a 71-64 win.

The Marauders led the entire game, sometimes flirting with the possibility of going up by 20, but the Falcons never wilted in front of a raucous crowd, never letting Jesuit get too far ahead of themselves.

During the final minutes of the fourth quarter, CB came back from a 12 point deficit, putting themselves in striking distance.  Unfortunately, Jesuit were able to make their free-throws to seal up a victory.

CB was without key player Hayden Jones (’14), who  sat on the bench with an injured shoulder.

“It was very hard for me to sit out,” he admitted.  “This is my first game I’ve missed playing against Jesuit.  It was very, very nerve-racking sitting on the sideline knowing that I couldn’t help my team.”

With Jones out, other players stepped up and filled his stop.  Sophomore Finn Whetstone (’15) played tremendous defense, defending Jesuit’s tallest players while blocking at least half a dozen shots.

“I just timed [their shots],” Whetstone said. “I just waited.”

It was junior Prestin Barnett (’14) who had the biggest game Saturday night on the offensive end.  He lead all scorers with 28 points and had a least half a dozen assists.  He also was made his free-throws down the stretch when CB was mounting a comeback in the final minutes.

“I couldn’t do it without my teammates though,” the ever humble Barnett admitted.  “They’re everything to me [as well as] the coaches.”

“[Prestin] played pretty much the whole game,” Coach Chavez said.  “He played hard.  He didn’t stop working.  He attacked the rim hard, which is something we want him to do, and he shot his free-throws very well.”

“Prestin played unbelievable tonight,” Jones added.  “It’s what we need from him every game. It’s what he’s going to keep bringing, and we’re excited for the rest of the year.” 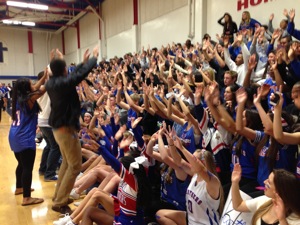 The fans were extremely proud of the men’s team.  They left it all out on the court, expending every ounce of energy they had.  The fans let the team feel their love with at least a twenty foot long tunnel, patting the boys on the back as they ran past.

“Our boys did a good job of staying in it and playing hard,” senior and fellow basketball player Niel Valmores (’13) said.  “We are very proud of them for that.  Never giving up is something CB is really good at.”

“These guys never game up throughout the entire game even when things weren’t falling,” said Athletic Director Mrs. Jill Bennett.  “They battled. They kept working [to] put themselves in a position at the end of a game with less than a minute to come back.”

Despite a disappointing loss, Coach Chavez and Jones both have positive outlooks regarding league and what they hope to take away from this game.

“We fought back—we fought hard,” explained Coach Chavez.  “We didn’t play as well as we could have, but we were still in the game at the end.  That’s going to translate over to our league.  Jesuit is just as good as anyone in our league, and that’s going to help us later on down the line.”

We can take away that we are still 1-0 in league,” Jones stated.  “This game does not affect us now.  We can build from this game, get better and go out and win the league.”

Senior captain Ben McFadden (’13) takes away even more from this game, as he comments about the youth and talent of his team.

“The future is very encouraging for this team and this program,” McFadden said.  “We are a very young team—we only have four seniors—so to see that fight in a bunch of young kids, that’s very impressive.”

Jesuit’s Head Coach Greg Harcos was proud of his team for handling the pressure, but he complimented CB’s on not making it easy for his team to win at the end.

“We did a good job [handling the pressure],” he said.  “Christian Brothers kept fighting; they kept battling.  Our guys had to withstand that and make plays down the stretch [in order to win].”

The Falcons are currently 1-0 in league, after defeating the Oakmont Vikings 51-36.  They take on the Casa Roble Rams tonight on their territory at 7 p.m. and return home on Thursday to play against the Del Campo Cougars at 7 p.m.  Be sure to come out and support our Falcons.