Falcons Of The Week: Elizabeth, Amelia and Rigo Herrera

Although they share the same name and birthday, these CB senior triplets have diverse interests and talents. On December 31, 1995, at 8:39AM, Amy Rogers and Rigo Herrera brought three new lives into the world. First came a girl, followed by another girl, and the triplets were complete with a boy last. These triplets were […]

Although they share the same name and birthday, these CB senior triplets have diverse interests and talents. 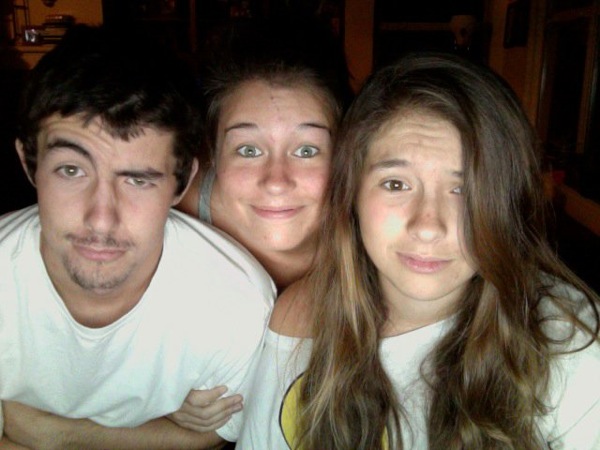 On December 31, 1995, at 8:39AM, Amy Rogers and Rigo Herrera brought three new lives into the world. First came a girl, followed by another girl, and the triplets were complete with a boy last.

These triplets were named Elizabeth, Amelia, and Rigo Herrera (’13). The three would continue on to St. Francis Elementary School in Midtown Sacramento and continue on to grace Christian Brothers with their presence.

People often questioned the three, asking, “Are you REALLY triplets?”, seeing as each Herrera looks quiet different from the others. However students were eventually convinced and the three have become known as “The Triplets”.

The triplets go by Liz, Mel, and Rigo and each one brings their own intelligence and talent to CB. 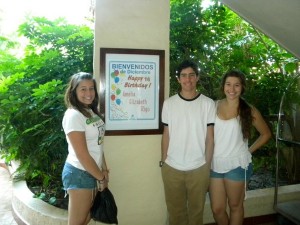 Liz has an exceptional dedication to animals and hopes to one day be a veterinarian. On the weekends, you can find her riding horses and cleaning stables, while also balancing multiple AP Classes. As if that wasn’t enough, students have noticed her knack for clothes. Liz has definitely found a way to make CB dress code cute and fashionable.

To say Mel is “good” at art is an understatement. She has been apart of the CB 4 year art program, and has gone above and beyond what CB has seen in the past. Mel’s creative mind has won her spots in the La Salle Art Show for three years, and even an honorable mention. Mel is known on campus for her outstanding art skills and has definitely made her mark at CB.

Last, but certainly not least: Rigo Herrera. It’s safe to say that Rigo’s talents don’t stop with just his great intelligence. Rigo is apart of a rec soccer team that has a very high winning streak. Not only that, Rigo has participated in the CB Scholar program and was apart of the freshman soccer team. His passion for computers goes beyond any other student, and he has a great grasp on technology. Rigo also has amazing charm. His witty personality will get you laughing, and you won’t be able to stop. Rigo is surely more than just the mustache.

But, did you ever think what it really is like to live with two other people? Let alone, being apart of triplets?

As if a minute meant a lot in the Olympics, one minute evenly breaks apart Liz, Mel, and Rigo. Liz is the oldest, followed by Mel, and Rigo. Mel and Liz share a room together, which can at times be a hassle.

“Sometimes you just don’t want to share your space or your stuff,” Liz says.

[pullquote]For Rigo, being the youngest AND the only guy in the triplets can have its drawbacks. Because he is the only male, the girls have an advantage “to team up… and pick on [him].”[/pullquote]

There definitely are some downsides to having two siblings the same exact age as you.

Liz remembers how at times she “just want[s] to lay down and watch TV, but the TV is being used by one sibling and the other by parents”.

And of course for Rigo, being the youngest AND the only guy in the triplets can have its drawbacks. Because he is the only male, the girls have an advantage “to team up… and pick on [him],” he says.

However, he overcomes this by not allowing the one minute difference get a hold of him. To him, “it doesn’t really make a difference” who is in fact the oldest — Rigo does his own thing, and enjoys every minute of it. 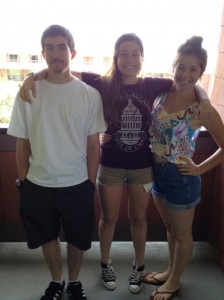 It’s no question that Liz and Mel have a special bond that most sisters would love to have. Liz admires the connection, saying, “Mel and I have the same interests and we have the same friends and we want to do the same thing.”

Mel agrees that her and Liz “basically have the same friends, so [the two] hang out a lot.” The two “share clothes… and generally if one asks the other sister can use [whatever they want]”.

They even have a tradition of watching the TV show American Horror Story on Wednesday nights at 10 PM. You may find these sisters sharing a roll together at Sushi Café in Land Park as well. These two are more than just sisters; they are friends with a bond stronger than most can see.

There is no doubt that being triplets has many benefits. Rigo enjoys the fact that “if [he] ever truly needs something, there are two options for help there whether it be school work or general stuff”.

We can all use a little help when it comes to awkward family events, but these three have family gatherings in the bag.

“Well if we have to go to awkward family events there are always two other people who feel just as awkward and who don’t want to be there,” Liz says. “Especially when we were kids and we didn’t go out with friends that much there was always someone to play with or hang out with.”

Mel also found some benefits to having triplets in the house. “You’re never bored at home. If you’re ever bored, you just go bother the other one and then hang out with someone.” Triplets come in the greatest moment of need for these three, saving them from whatever it may be, such as boredom, family events, and even school.

One topic, though, immediately brought a “sigh” to each of the Herreras: their red Honda Cr-V. Liz described it as simply “a hassle”. They have a rotation for who drives to school and who gets the car on the weekdays, but on the weekends anything goes. 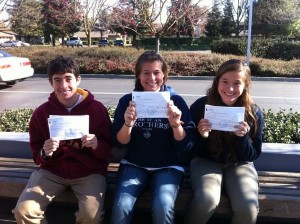 “It’s basically whoever calls the car on the weekend gets it,” Mel says.

“Generally on the weekend it’s Mel or I, and I end up driving because she doesn’t like to drive,” Liz adds.

Being a student at Christian Brothers, one is bound to run into one of the three or have classes with one of them, or multiple of them, or maybe even all three. You can find all the triplets in Ms. Safford’s homeroom. You can find Mel and Rigo in Mr. Capogreco’s Spanish and Ms. Safford’s math classes. Or you can see the sisters in action in Ms. Shackel’s B set AP Literature class.

Despite their bond, the triplets future paths will soon take them in their own direction. Liz hopes to attend UC Davis, Amelia wants to go to University of San Francisco, and Rigo’s intelligence will bring in south to San Diego or north to Willamette University in Oregon. The three musketeers will soon be splitting apart and it is something they will have to adjust to.

“It will be weird even though I don’t really hang out with [Rigo], he’s not going to be right next door,” Liz admits. “Mel is going to be close, but it’s going to be weird, even if we do fight.”

“It’s going to be so weird since we’ve lived together for the last 18 years of our lives,” Mel says.

Each Herrera makes what are the Herrera triplets and each plays an important role in each other’s lives. Next year, there will definitely be a hole that can never be replaced. No triplet at Christian Brothers can compete with what the Herreras bring to our community

Just remember, next time you see a Herrera triplet, don’t just call them “The Triplets”. They are “not a single unit of people,” Mel says. They are individual beams of life that bring a unique, creative, caring, and intelligent aspect to the class of 2013, and will greatly be missed.