Kick Off Those Friday Shoes

Things got “Footloose” at the second Open Mic Night of the year. The three hosts — Camille Peters (’13), Charlie Passarell (’13), Dylan Santana (’14) — welcomed the crowd to last Friday’s Open Mic Night, and introduced this month’s theme Footloose. And it was no question that our feet were loose dancing to the first […]

Things got “Footloose” at the second Open Mic Night of the year. 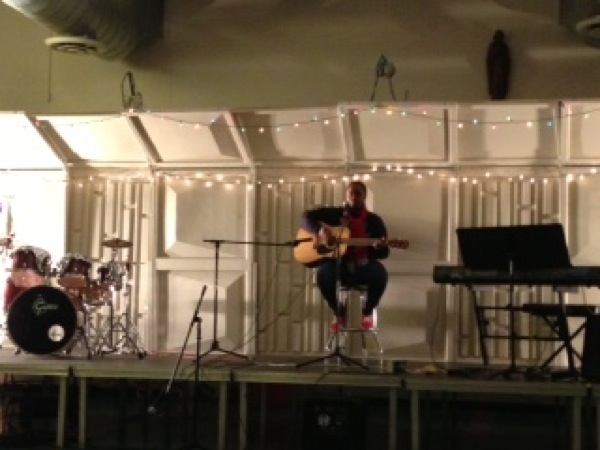 And it was no question that our feet were loose dancing to the first act Don’t Sax Me Bro. This group of guys could not have started the night off better with their version of “Apologize”. With lead saxophone player Josh Stone (’13), they took over the crowd, and could be called the opening act of the century.

After being serenaded by a couple of solo acts from underclassmen, including Sydney Garcia (’15), whose rendition of Back to Black left everyone’s jaws dropped, it was nice to see another senior, Monica Rocco (’13), who it’s safe to say represented the class beautifully. With just her voice and her guitar, Monica stole the crowd with the song “Collide”.

Monica has been singing in Open Mic since her freshman year, and says she has performed “probably about 15 times”!.Catching up with Monica after her no doubt best performance of her career, she told the Talon she felt “wonderful,” giving one of her last performances of the year.

Returning from the intermission,  Kiki Burns (’16) and Kelly Xia (’16) captivated us with the song “Skinny Love”. For such a popular song, the freshmen put a new twist on it, bringing it new life and something to be looking for next Open Mic.

It was their first time performing, but you would never expect that much talent from a duo that had never before graced the stage

Another freshman, Cody Upton (’16) shredded it up on the guitar. His skills were first seen in his appearance in the group Don’t Sax Me Bro and the crowd was pleasantly surprised to see him get back on stage for his own solo. Cody’s talent on the axe took the crowd’s breathe away. Senior Isabel Meshot (’13), called him “the next Jimmy Hendrix”.

As the night came to a close, the long anticipated, first annual Open Mic balloon drop left the crowd wanting more, and the evening continued into a short dance party to the famous Footloose. With some outstanding acts, this past Open Mic is definitely one for the books.