Let Me Tell Ya Tuesdays

Find out what gets CB students, teachers, and the Talon Staff through the day with a little zen from movies, books, and music. Student Pick : East of Eden by John Steinbeck Elizabeth Herrera (’13) was more than pleased when her Honors American Literature teacher, Ms. Chrys Cassetta, introduced the book East of Eden to […]

Find out what gets CB students, teachers, and the Talon Staff through the day with a little zen from movies, books, and music. 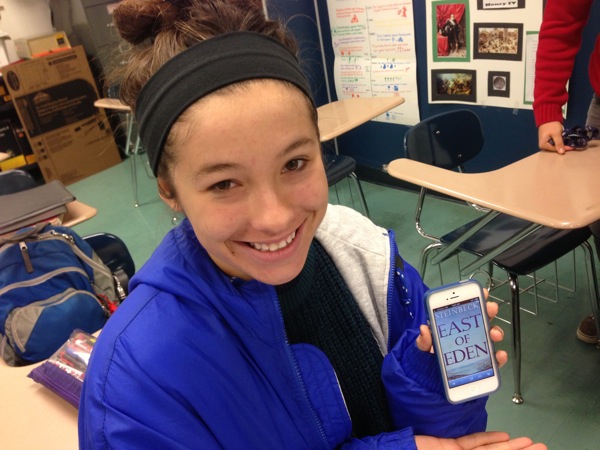 Elizabeth Herrera (’13) was more than pleased when her Honors American Literature teacher, Ms. Chrys Cassetta, introduced the book East of Eden to the class. Published in 1952, this book is an all time classic and still read in classrooms around the world.

East of Eden touches on themes such as love, guilt, and acceptance, amongst others.. But what Elizabeth loved most was the “really nice characterization”. She “really got to know the characters,” and was able to “see the symbolism” with the help of Ms. Cassetta.

When I first asked Ms. Kelly Safford what her favorite band was, she said there was “too many”. But after just a few seconds, she instantly replied, “The Dixie Chicks”.

After going to high school in Montana, she “had a [preference] for country music”. In just three words, she was able to describe the popular trio: “have fun music”.

Just a little while later, she stopped me and added the Indigo Girls as another favorite. The Indigo Girls are an American folk rock duo from Atlanta.  After starting their career in 1987, they have been nominated seven times for a Grammy, and won once for Best Contemporary Folk Album.

After speaking with Ms. Safford, she offered to play me a little of both the Dixie Chicks and the Indigo Girls. It’s safe to say Ms. Safford has a great balance of music between relaxing and easy going, to up beat and “have fun music”.

Nothing usually makes Talon Staff Writer Kelsey Bridges cry, unless of course it is from outrageous laughter, and that is just what happened when she went to go see the movie Pitch Perfect. The movie was just recently released in October of 2012, and is already nominated for the People’s Choice Award for Best Comedic Movie.

The movie casts popular actress, Rebel Wilson, who plays the character of “Fat Amy” in the movie. Wilson was first seen in the movie Bridesmaids, where she was a huge hit. Kelsey was happy to see her in a new movie, and “was just hilarious”.