The Falcons are playoff bound with a resounding win over Bella Vista. The final game of the season was a win or go home game scenario for our Christian Brothers Football team.  They needed to defeat the Bella Vista Broncos this past Saturday in order to make the Division III playoffs. CB stepped up to […]

The Falcons are playoff bound with a resounding win over Bella Vista. 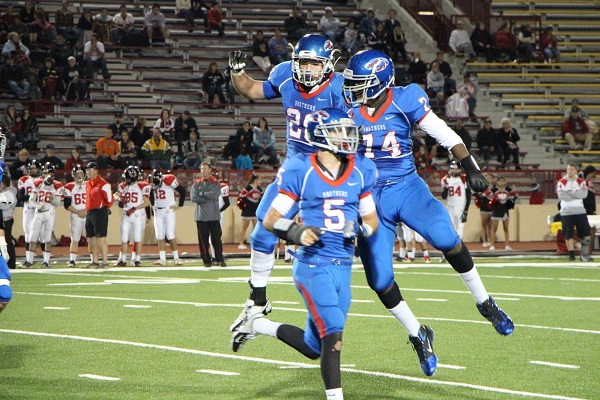 The final game of the season was a win or go home game scenario for our Christian Brothers Football team.  They needed to defeat the Bella Vista Broncos this past Saturday in order to make the Division III playoffs.

CB stepped up to the challenge though as the Falcons rolled to another impressive win as they defeated the Bella Vista Broncos 40-14 to seal their spot in the playoffs.

“This is one of the greatest accomplishments ever,” senior captain Vinnie Johnson (’13) said. “I have nothing but excitement and grace to these juniors — they made us a lot better.”

The game got off to a great start with the Falcons scoring their first touchdown in the opening four minutes.  CB continued to play terrific offense and defense throughout the rest of the first half, as they entered halftime with a 20-7 lead.

The biggest highlight of the first half was Jalen Walker’s (’13) 99 yard kickoff return for a touchdown.  He weaved in and out of the defenders, plowing through them until he ran into the end zone while his teammates blocked for him.

“I was just happy. Thank God I did [score the touchdown] because I wanted to win,” Walker said bashfully.

The second half was just as exciting as the first.  The Broncos crumbled against CB’s relentless defense.  Jordan Regino (’13) and Brendan Gormley (’14) easily picked off passes from the Bella Vista quarterback.  The Falcons continued to play tremendous offense with quarterback Chris Guillen (’15) and Avante Yarber (’13) scoring touchdowns in the third and fourth quarters. 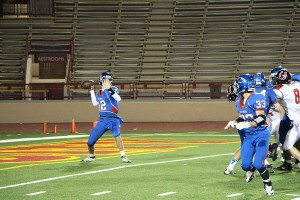 The player that stood out the most was Yarber.  In only his second game back from an injury, he has already scored four touchdowns — with three on Saturday alone.

When asked about his success on the field, the running back said, “I just go into animal mode.  It’s just pure instinct.”

“I have to thank my teammates for everything, especially blocking,” the humble senior added.

With help from the offensive line, Yarber was able to blast through big holes in the Broncos’ defensive line, making him able to advance the ball effortlessly.

“[The] offensive line has been doing great all year,” he said. “They’re really the unsung heroes of our team.”

Coach Petrissans only had glowing comments to say about Yarber when asked how he thought the running back has impacted the team.

“Avante was such a leader.  He came out to all our practices and was in their presence the entire time [he was unable to play],” the coach said. “He has been that spark for us right now.”

But for now the focus is on the playoffs.

“We started off great this year,” other senior captain Michael Rose (’13) said. “Our defense was great and our offense has just grown.  I think we’ve really become [a] playoff contender.”

Coach Petrissans commented, “I’m so happy for our seniors for them to have a chance to make the playoffs.”

The Falcons will be on the road as they travel to Elk Grove take on the Consumnes Oaks Wolf Pack  next Saturday at 7 PM. Come out and support our Falcons in their quest for a section title.