The Talon’s Charlie Passarell sacrifices sleep — and possibly his sanity — to check out Wellspring Club. When I arrived at Brother Bertram Hall at six o’clock in the morning, I was in a sour mood. Sleep had been eluding me all night because I was terribly nervous about the first Open Mic night of […]

The Talon’s Charlie Passarell sacrifices sleep — and possibly his sanity — to check out Wellspring Club. 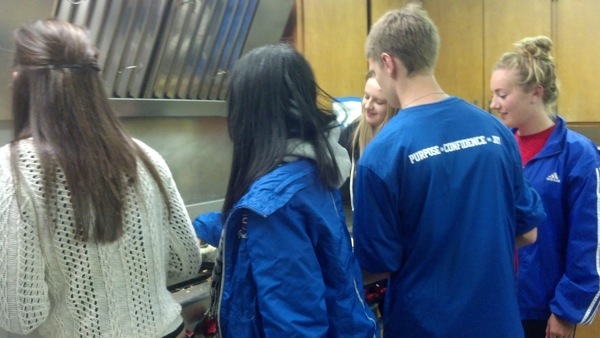 When I arrived at Brother Bertram Hall at six o’clock in the morning, I was in a sour mood.

Sleep had been eluding me all night because I was terribly nervous about the first Open Mic night of the year, which I was co-hosting that night.

But alas, I crawled out of bed and came to the dark and vacant school to take part in Wellspring Club — a group of students who meet every Friday morning at 6 AM to cook pancakes and eggs for the Wellspring Women’s Center, a nearby organization that provides a safe and supportive community for lower-income women and children.

I felt pushed over the cliff of panic when I found myself locked out of the school. After a few minutes of my mind melting with confusion, nervousness, and frustration, though, a teacher arrived at the door and opened it for me.

Once I was actually inside the labyrinth that is Brother Bertram Hall, I wondered its corridors for what seemed like ages. Eventually, I stumbled upon the kitchen, where I was shocked by what I found.

Lots of students were gathered around the stove top, making food. I was fairly shocked by the number of students helping, but I was more shocked by how many were wide awake at this ungodly hour.

Barely alerting people of my presence, I set my backpack down and perched in the corner of the room, where I observed the mesmerizing show. It was the type of setup that would make Henry Ford proud.

[pullquote]I had thought myself invisible in my little corner, until the most unique member of the Wellspring group discovered me.[/pullquote]

There were so many people, that each job on the assembly line was relatively small. One person carried a cauldron of the yellow goopy slimy substance I knew to be eggs over to the stove top and poured an excessive amount.

A team of spatula wielding cooks would then assault the cooking eggs until they were scrambled. The final person would carry over a large tin container, which was already partially full of the wonderful breakfast treat.

It was quite an efficient process — everyone knew their station and worked it well.

Occasionally, a person’s shift would end and they would switch with whomever was lounging at the table.

I had thought myself invisible in my little corner, until the most unique member of the Wellspring group discovered me.

Mrs. Heine’s dog had wandered into my corner and was curiously perusing my possessions. We soon worked out a deal: I would occasionally pet the kind black lab in exchange for its not alerting the room to my being a fly on the wall.

The feelings in the air were infectious. Even I, in my dreadful mood, began to find myself smiling and cheery. As everybody worked, they made fun conversation and laughed. There’s just something about when people come together out of their good of their hearts to help others. I believe it’s simply good, shown in its clearest, most natural form.

It wasn’t even shocking how, with so many helping hands coming together to work towards a common goal, the task was completed quickly. I left Brother Bertram Hall, my mood fixed and my mind put at ease — it was a great start to the day.

If you, or anybody else you know is on the fence about whether or not to join Wellspring, I’d suggest you sit in on one of their cooking sessions — it’s quite the experience.