Christian Brothers shows why it is “the place to be” Its 11 AM at Christian Brothers High School. Open House has just begun. The gates of Christian Brothers open and hundreds of prospective students trickle into the school–some knowing that they will surely attend CB their freshman year, others still making the tough decision of where to […]

The gates of Christian Brothers open and hundreds of prospective students trickle into the school–some knowing that they will surely attend CB their freshman year, others still making the tough decision of where to spend their next four years of schooling.

There are over 40 Catholic elementary schools in the Diocese of Sacramento — many of which were represented Sunday at Open House.

But the students of CB need not attend a Catholic elementary school or even hold Catholic beliefs for that matter.

The school was originally founded by St. John Baptist De La Salle, a teacher himself who believed that is the teachers’ calling to touch the hearts and minds of the students entrusted to their care.

John Nelson, a father of three, has already sent his daughter Audrey Nelson ‘16 to CB and could not be any happier.

“It’s really great here,” he said. “You come to an event like this and see so many students happy to show off their awesome school.” 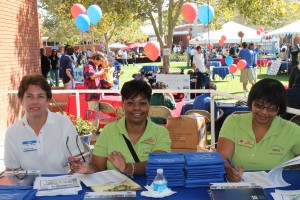 The main lawn was filled with eager seventh and eighth graders walking aroaund the many different student activity booths. Many of these students were already showing their falcon spirit by sporting CB shirts.

Ryann Thomison, an 8th grader at Holy Spirit School, has already made her high school decision.

“I want a co-ed school — CB is that place” she said excitedly.

Some students came to Open House in order to help them make their decision.

Cambria Sanders, an 8th grader at Toby Johnson Middle School hasn’t decided where she will go yet. Coming from a school with over 4000 students, Cambria was delighted to find out that CB has a respectable student body of 1000 students.

“I really like how nice people are here,” she told the Talon.

While many students come to CB searching for an outgoing and inclusive community, St. Mary’s School student William Berg has a different reasoning behind his visit to the Christian Brothers Open House.

“I’m more interested in the education and religious studies departments,” he explained.

Mr. Chris Symkowick-Rose, the assistant Principal for Curriculum and Instruction, believes Open House this year has been a success.

“It’s a really exciting event” he said. “We already have over 400 students registered as of today.”

These 400 plus students are now signed up to receive more information about CB and take the next steps to becoming a Falcon.