The Dirt on DIRT

Find out what CB students had to say about the drug talk that wasn’t about drugs. Groan —another drug talk. I’m not a baby. I know what is good for me and I know what is bad. I don’t need some overpaid stranger to dance on stage to get the point across. As one would […]

Find out what CB students had to say about the drug talk that wasn’t about drugs.

As one would expect, drug, sex, and alcohol talks are not popular amongst high school students. But last Monday, Christian Brothers High School invited comedian and actor John Morello to perform a revolutionary one man show, called “DIRT”, for CB students.

Nearly everyone laughed. The solo actor played numerous characters that were all somehow connected. Roles of a “druggie,” a grandpa, a depressed girl, and more were acted out using simple costumes and a comedic style.

While most CB students appreciated the comic relief, there were mixed feelings about the performance and its message. 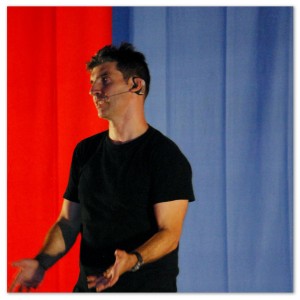 The show “attempted to teach sensitivity,” says senior Anthony Colvard (’13), but it ended up being “an hour and a half performance with a ten minute message that he just threw at us at the end.”

Anthony’s classmate, Brittney Guevara (‘13), disagrees, saying, “[DIRT] gave us a different perspective on how to act toward others who are going through difficult times.” She even went so far as to call it “one of the best presentations we have ever had [at CB].”

“It was better than normal drug talks because it related to us,” expresses junior Margret Tabunda, “The guy was funny and he didn’t try too hard to be funny.”

In the end, the message was not just about drugs and alcohol, but about how to treat other people. It forced students to reflect on how their actions affect others — whether they be friends or complete strangers.

In the words of senior Justin Broussard (’13), “everything affects everything.”