A blast from the past with Mr. Danny Delgado.

As a Christian Brother’s graduate from the Class of 1979, the outgoing CB science teacher and cross country coach, Mr. Danny Delgado ’79, gave us a little blast from the past as he describes what CB was like during his high school years.

Mr. Delgado began his high school career at a time when CB was still a small, all-boys school. As a member of the CB football team, cross country team, track team, student government, drama community, and Talon newspaper, it is surprising that this former Falcon still had time for anything else.

“Sports took up all my time,” recalls this athletic teacher. “[It was] always sports”.

But a busy schedule didn’t stop Mr. Delgado from spending time with friends, who recalls that “frisbee golf [was a] very popular [pastime]”

Along with jamming out to funk and soul tunes, the energetic teacher says that since there were so many Catholic high schools (five total),  “basically every Saturday [he and his friends] could go to a dance.”

With a passion for science, it is not at all surprising that Mr. Delgado became a science teacher, but that wasn’t always his intention.

“I’ve [always] loved science [but] I never even thought to be teacher; I always thought I would be a doctor”

During his 4 years at UC Irvine, Mr. Delgado changed his focus from becoming a doctor to studying social studies and adolescent psychology.

The motivated student then came back to Sacramento to pursue his masters in social work at Sacramento State University. One thing led to another and before he knew it, he was accepting a job at his alma mater. 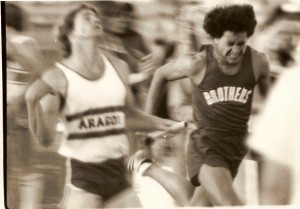 Although the ensuing years have brought about many changes to CB, Mr. Delgado’s love for his home school has not changed, saying that he “still loves CB [as much] as [he] did [back] then”.

If there is any advice he could give to his high school self, it would be this:

“First, learn how to study.”

“Second, enjoy every opportunity, especially [those opportunities with] the people you meet.”

“And [third], take nothing for granted.”

That is certainly advice we can all learn to live by.