Meet a 91 year-old man who continues to live out CB’s motto.

Enter to learn, leave to serve.

The 91 year-old man says he has “developed a curiosity about just about everything” and that he would “really like to learn more.”

Mr. Cunningham’s curiosity was fueled by taking advanced classes at Christian Brothers High School, which used to be on the corner of 21st and Broadway. The hardworking student went on to attend Sacramento City College and Arizona State University.

“I wanted to be a criminologist,” says the alumnus, “but you had to be 5’10 –I was 5’8.” So the motivated student decided to major in sociology –the first of many things that he has mastered.

In 1941, President Roosevelt declared war and according to the CB alum, “almost everything changed.” Mr. Cunningham joined the Air Force soon after finishing college, where he worked on a B-24 bomber.

“I was with the first group to occupy Japan,” recalls the veteran. “People there were so pleasant.”

The same compassion that helped him love those who were labeled as enemies carried over to Mr. Cunningham’s family life after the war. His wife, Rosalie, had a variety of medical conditions that caused her to be hospitalized for a vast majority of their marriage.

“I was in charge of her care,” says the loving widower who visited his wife two times a day. “I made certain that they took good care of her.”

Mrs. Rosalie Cunningham received the sacrament of last rights three times before her death. Each time, her husband’s loving words and companionship helped pull her through.

Though Rosalie eventually passed on, Mr. Cunningham did not stop helping others. The energetic senior visits people in nursing homes and looks after a few friends, such as one of his neighbors who has Parkinson’s Disease. A selfless Mr. Cunningham visits her and makes sure that she has all of her medications.

Astonishingly, the volunteer somehow manages to find time to take classes and learn about anything and everything.

Placing a strong value on learning, the 91 year-old CB graduate believes that “high school is the most important transition between childhood and adulthood.” 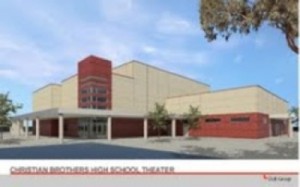 The plans for the new Christian Brothers theater.

For this reason, Mr. Cunningham generously donated a large sum of money to Christian Brothers High School for music classrooms after his son, Michael Cunningham (‘67), devastatingly passed away in 2005.

A few years later, Mr. Cunningham made another generous offer and pledged one million dollars toward the construction of a new theater at CB. He also began sponsoring a student at Christian Brothers through the Brother David Brennan Scholarship Program.

“If I could sing, I would be a song and dance man,” says the lively alumnus, “but I can’t sing.”

As a compromise, Mr. Cunningham can listen to the voices of the Christian Brothers choirs in the music rooms and new theater that he so generously funded.

“CB is a great school and I will continue to support it as long as I can.”