Inside the mind of the one of the CB players during the biggest week of the season. The game is over. Everyone knows the result. The game clock on the large scoreboard at the open end of the horse shoe shaped stadium suddenly paused at all zeros as did the world around me. For a […]

Inside the mind of the one of the CB players during the biggest week of the season. 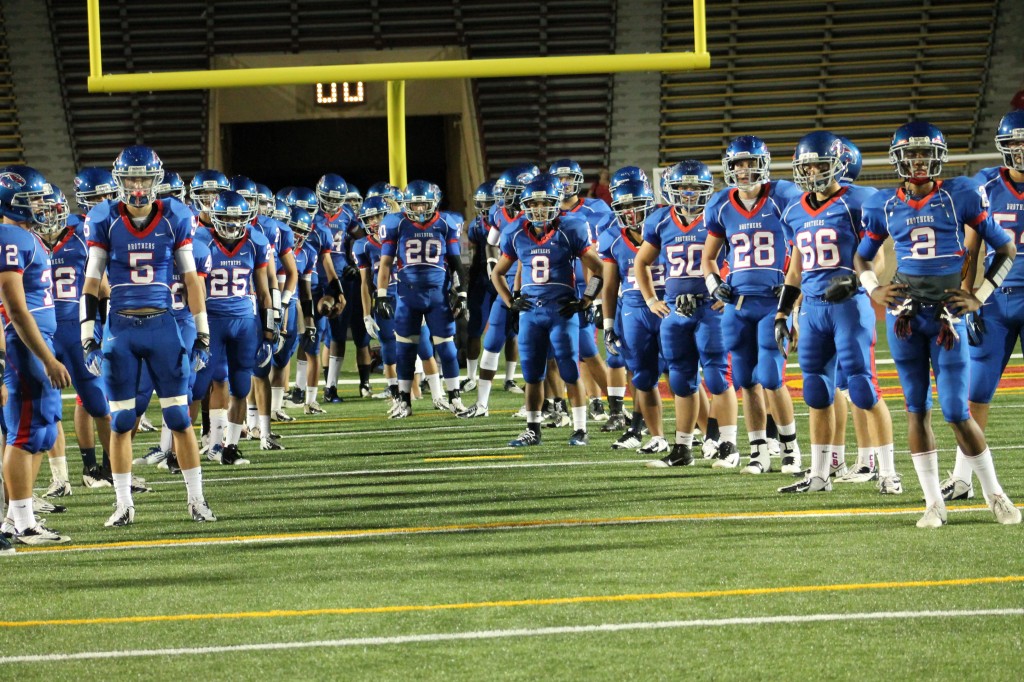 The game is over.

Everyone knows the result.

The game clock on the large scoreboard at the open end of the horse shoe shaped stadium suddenly paused at all zeros as did the world around me.

For a split second, I could hear nothing but my heartbeat and see nothing but the tears shed on my teammate’s faces. As I reciprocated those same emotions, I felt as bad for them as they did for me.

Even though we lost to Jesuit 28-23, the immense preparation our team had leading up to the highest attended high school football game in Northern California was rigid and agitating — and well worth it.

This is my diary of the days leading up to the greatest rivalry game in all of the Sacramento Metropolitan Area: Holy Bowl XLII.

You can sense the excitement in the air. The buzz around school is growing. Every day the school wide announcements say when, where, and what time the game is and you can’t help but zone out for a moment and think about it.

Think about what you are going to do when you get on the field. Think about the block, or catch, or throw you will make. I can see it in all of my teammate’s eyes. It may be a brief moment, but I can tell what they are contemplating.

Practice begins and “it’s time to put the hard hats on” as Coach Petrissans would say. Everyone practices hard as we recognize how close this game will be. After practice, I went home and made sure to take care of any aches or pains I may have, but all the while my mind is focused on Saturday night.

It’s a late start for the school, so I can start the day off right. As I walked onto campus, I caught glimpse of a poster that read, “HOLY BOWL XLII… GO FALCONS” and felt a chill come over me as once again I thought about the game.

This time, I could see the thousands and thousands of fans in the stands; half in blue, half in red and white. The end of the school day approaches and it’s time for the annual pump up rally. I joked around with my friends and then they called senior football players into the middle of the gym.

Then the rest of the team comes down to join us and I came to realize that this will be the group of guys with whom I will play my last Holy Bowl. As several of the coaches spoke and Coach John Wiley broke a stack of yellow bricks painted “JHS”, I thought about all of my friends not on the team. Just knowing that they will be screaming their lungs out that night gets me pumped even more.

Friday, one day till game day

The day goes by a lot faster and before I know it the final bell sounds off. To my dislike, several of my teachers give me weekend homework, but I know I won’t worry about that until Sunday anyway. At the end of each class, the teachers wish me good luck and tell me how loud they will be cheering.

Yet again, the constant hype prompts me to flash forward to the game. But this time I think about the family that will show up to support me. Practice is brief and I head home to relax and visualize some more.

I wake up in the morning feeling like P Diddy. Just kidding!

There is college football on TV, so I watch some to help me envision what I will do when I get on the field. I eat a good hearty meal around 2:00 to give myself enough time to digest the food before the game.

I arrived to walk thru practice and everyone is excited. We then go to the JV game to root on our “little brothers”. When we walk into that locker room, talking ceases and everyone listens to the music blasting throughout the room.

We warm up right around the third quarter of the JV game and we can finally get a taste of what the atmosphere will be like as fans pile into the stadium. After we walk back into the locker room, it’s time to go crazy.

It is as if silence is the enemy because everyone wants to gets as loud and hyphy as possible. We go through introductions of players and then the National Anthem is played.

As the song concludes, I put my helmet on and strap up my chin strap. I get a few butterflies in my stomach and that is when I realize… It’s time to play some football boys!