Falcon of the Week: Nate Kauffman

Meet the CB senior who used Nutella to help overcome personal obstacles. “My addiction started when I was 16– I tried a bit, and I instantly fell in love with it” After reading such a phrase, one tends to automatically assume the worst. For Christian Brothers student Nate Kauffman (’13), however, the word “addiction” holds […] 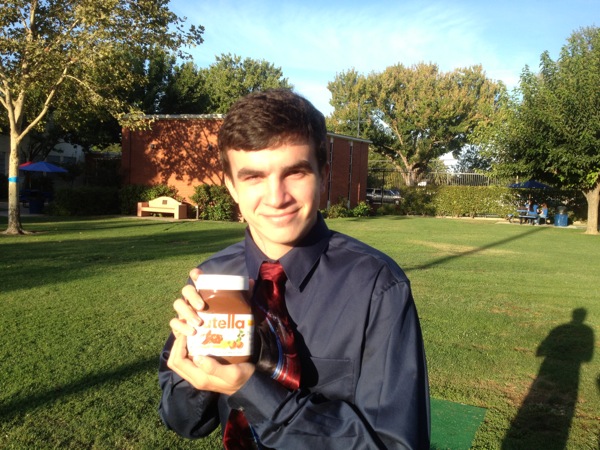 “My addiction started when I was 16– I tried a bit, and I instantly fell in love with it”

After reading such a phrase, one tends to automatically assume the worst.

For Christian Brothers student Nate Kauffman (’13), however, the word “addiction” holds a completely different meaning. The senior describes his fixation as “quite delightful”.

If you look down the senior hallway at break, you will notice that more often than not, Nate grins ear to ear as he firmly grasps a jar of Nutella — a popular hazelnut chocolate spread from Italy. The Student Council Publications co-chair isn’t really addicted to Nutella, but he feels that it has become an important part of his life.

The optimistic senior often finds himself enjoying a conversation with a friend over some toast and Nutella. He gladly extends a friendly hand out to anyone wishing to try a taste of his favorite breakfast spread.

Nate’s fascination with this European breakfast staple began his junior year. After noticing a jar of Nutella in rugby teammate Danny Levis’ (’12) locker,  Nate was intrigued.

After Danny offered him a taste, Nate knew that this would not be his last taste of Nutella. The next day, Nate was determined to have more.

“Many people remember the day that I brought a loaf of bread to go along with Danny Levis’ jar of Nutella, ” he told the Talon. “[The seniors and I] just bonded over this meal of Nutellaness.”

Unfortunately, the new Nutella lover had to cut his rugby career short.

Toward the end of his junior year, Nate began to notice a slight loss of feeling in his arms and legs. The doctors told him that it was necessary for him to undergo spinal treatment.

The recommended surgery was a fusion of the neck at the C2 and C4 vertebrae in his upper neck, which the senior braved this summer.

Nate was very thankful that he was able to receive surgery before anything more serious could have happened. Obviously, his friends felt the same way as he received many visitors while still in the hospital — many bearing a special treat.

“Whenever people came to say hi to me they always brought a jar of Nutella”, he said.

As a 2012-2013 Student Council member, Nate is proud to be known as the guy who always has a jar of Nutella handy. To him, the simple plastic jar filled with delicious hazelnut chocolate spread is a reminder of all the caring friends he has grown to love.