Find out how parent-teachers feel about their kids being at CB, and hear from students about what it’s like to have a parent on campus. “Hey Mr. Zannetti…Dad…Mr. Dad. Whatever! Can I have some lunch money?” Not a question a student would typically ask a teacher — unless you are Mary Zannetti (’14) or one […]

Find out how parent-teachers feel about their kids being at CB, and hear from students about what it’s like to have a parent on campus. 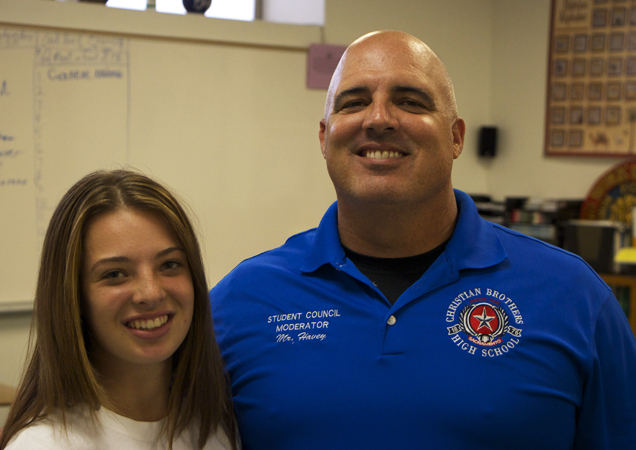 “Hey Mr. Zannetti…Dad…Mr. Dad. Whatever! Can I have some lunch money?”

Not a question a student would typically ask a teacher — unless you are Mary Zannetti (’14) or one of the other Christian Brothers’ students whose parents are CB staff members.

The Talon caught up with two father-daughter combos at CB to find out if the familial connection is a blessing or a curse.

The daughter of the beloved Christian Brothers’ religion teacher Mr. Chuck Zannetti says “it’s kind of cool” to have her dad working at Christian Brothers. If she forgets to sign a permission form or needs lunch money, Mary says she can just go right to him.

Likewise, Lizzy Havey (’15) says, “it is pretty convenient” to have her father, CB religion teacher and retreat leader Mr. Paul Havey (’81), working at CB. But she is quick to point out that if she is ever sent to the dean, having her father on campus will no longer be so great.

It’s clear how the girls’ fathers would react if they broke the rules, but what about every other day? How do the dads and daughters interact on a regular basis during the school day?

“We definitely acknowledge each other [when we see each other around campus]” Lizzy says. She does agree with Mary, though, in that she doesn’t seem to “see him that often.”

“Sometimes I can tell she doesn’t want my presence to be known — she wants me to stay away and I can sense it,” Mr. Zanetti says. “And at other times when she is happy I can go over to her and give her a hug…I just have to judge what kind of mood she is in because it could [embarrass her]”

Despite being a teacher, parenting will always be a number one priority for the teachers. The fathers’ only worry may be how other students perceive, or treat, their daughters.

“Students’ perception of my daughter can be influenced by what I teach and what I share about my faith and my values,” reports Mr. Havey. “They perceive her in a certain light because she’s my daughter and sometimes she doesn’t get accepted for who she really is.”

“But [as] people get to know her they’ll [start to] see her as ‘Lizzy Havey’ versus ‘Mr. Havey’s daughter’”

Lizzy agrees with her father’s description, admitting that “it is challenging because there are a lot of expectations.”

Despite minor difficulties, the girls, who say they grew up running around the hallways at CB, never doubted that they would attend Christian Brothers, to the delight of their proud parents.

“It’s wonderful — it’s the best experience I have ever had at Christian Brother,” Mr. Zanetti says. “It just brightens my day just to know [that she is at CB].”