New and exciting changes are coming to KBFT with the start of Season 11 It’s 8:30 A.M. and the aspiring journalists of KBFT Season 11 are putting their final touches on the stories of their first newscast. KBFT veterans Brianna Pressey (’13) and Alex Daly-Pshide (‘13) keep the class moving along, giving constructive critiques to […] 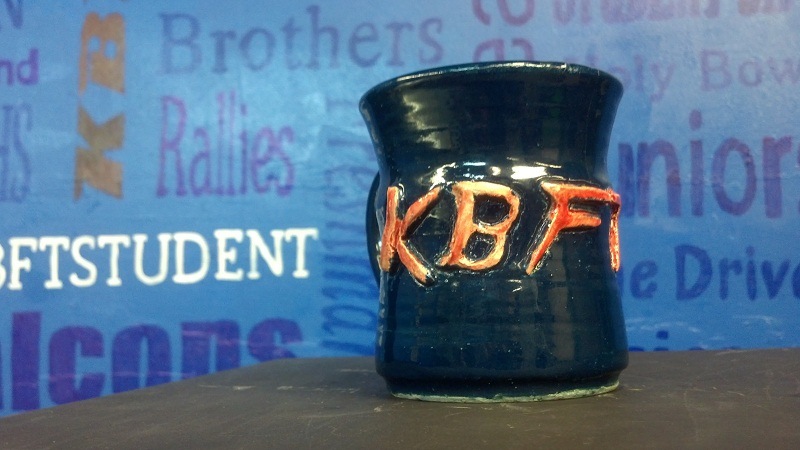 It’s 8:30 A.M. and the aspiring journalists of KBFT Season 11 are putting their final touches on the stories of their first newscast.

Emma Bradford (’14) and Jackson Long (’14), two of the many new faces viewers will be seeing this season, are sitting on the new set practicing their lines. They are a part of the new look that will shape this year’s KFBT broadcasts.

The students aren’t the only new changes to the studio — the Season 11 set has changed drastically from last year’s red chairs and coffee table. A new, more spirited set features a news desk with a student-created backdrop created by Bradford. The set backdrop features a large Falcon holding a television while the second board depicts many phrases and words relating to Christian Brothers.

The new group of KBFT students have also instituted a theme for this season: social media.

With today’s high school generation surrounded by social media, KBFT Program Director Mr. Brendan Hogan (’95) saw this season as a unique opportunity to get the CB community more engaged and excited about the station.

“The way you get involved is with your devices”, he said. “We need more feedback from our audience.”

Spearheading this theme is Jenner Chapman (’14), new face of KBFT Twitter. Over the past two weeks Jenner has been tweeting school updates, schedules, and reminders off of the twitter page @KBFTstudent.

“Everyday before school I tweet the sets, and feature people that tweet at me on the show,” Jenner said.

Make sure to tweet to @KBFTstudent about upcoming CB events to be featured on the show along with the rest of the latest news and stories from Christian Brothers High School.

Community
The Importance Of Remaining Positive