CB Football Off To Fast Start

Brothers comes from behind against River City, rolls past Vanden for 2-0 start. 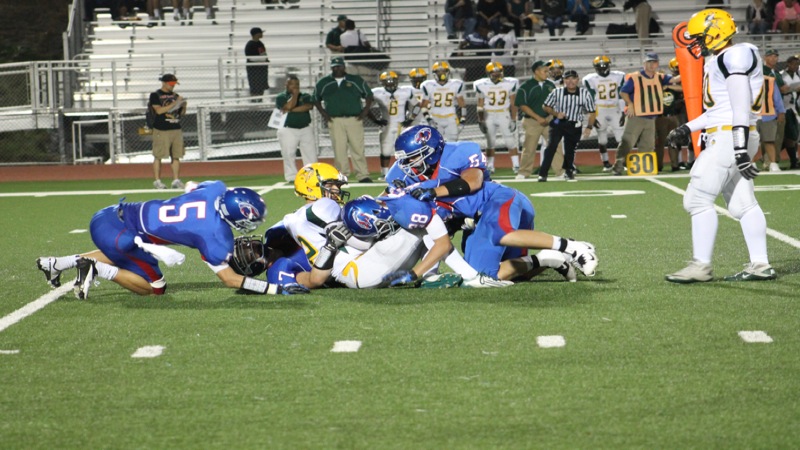 From the opening whistle to the final horn, the opening game of the 2012 Christian Brothers football season against River City High School on August 24 was close and exciting.

Following an interception on offense in the opening minutes, Ryan Graggs (’14) countered with 45 yard interception return for a  touchdown.

From that point on, the Falcons only gained three more points for the rest of the half, while the Raiders were able to score 14 unanswered to take a 20-10 halftime lead.

After the half, the Falcons returned to the field with a renewed energy, fired up and ready to play their hearts out as the defense kept the Raiders scoreless the entire second half.

The offense was stagnant to start the second half until Mason Stahley (’14) barreled into the end zone for a five-yard touchdown. The extra point from Ahkello Witherspoon (’13) cut the Raider lead to three.

Witherspoon made his mark on defense on the next drive as he intercepted a pass and took it to the three-yard line, putting them in prime time scoring position.

Stahley did the rest, scoring the what would be the winning touchdown from three yards out as the Falcon defense shut down the River City offense in the fourth quarter.

Assistant Coach John Wiley said the adjustments made by the defensive staff at halfmtime helped prevent River City from gaining any traction.

“We allowed our [defensive] line to have movement instead of still just going straight ahead,” he explained. “They were moving left and right which made it hard for [River City] to block our defensive line.”

The Falcons were also fueled by personal motivations heading into the game, as several River City players were allegedly taunting CB players on various social networking sites prior to the game.

But with a strong defensive performance, CB took care of business offline.

“[Our] players were doing all the talking with their pads,” Head Coach George Petrissans said.

What a difference a year makes.

Right around this time last year, the Vanden Vikings took the Falcons to town, beating them 48-12.  This year the Falcons played with more enthusiasm and confidence, taking control of the game from the opening kickoff as they came away with a 22-8 victory on Saturday.

The first half was a close, defensive affair, with the lone score coming on an Austin Guillen (’13) run.

However, the Falcons were able to reel off 15 second-half points in the second half, with rushing touchdowns coming from Guillen and Austin Hart (’14).

It was once again though the CB defense the offered up another relentless performance.  The unit notched five interceptions, two from Graggs and Brendan Gormley (’14), and one from Jalen Walker (’13). The standout interception of the game was Gormley’s in the third quarter,  as he easily picked off the ball at the Falcons’ 20-yard line and took it to the Viking five-yard line.

“I was just looking for the end zone,” said Gormley, who was disappointed he didn’t take it to the house. “I was tired — God, it was long.”

“But, the [defense] put in hard work this week and it paid off,” he added.

Coach Wiley said the players were doing a great job executing plays, listening to their coaches, and committing to their assignments, but that there is plenty of work still to be done.

The Falcons’ next challenge will be the McClatchy Lions on Saturday September 8th at the newly renovated Hughes Stadium at 7 p.m.  Come watch the exciting Falcons build on their hot start.