As the 2021-2022 school year comes to a close, the CB seniors are beginning to say goodbye to the school community. Every high school event, whether it’s a dance, sporting event, art show, or concert, is the very last that seniors get at Brothers. One of the special ways that CB seniors say goodbye is […]

As the 2021-2022 school year comes to a close, the CB seniors are beginning to say goodbye to the school community. Every high school event, whether it’s a dance, sporting event, art show, or concert, is the very last that seniors get at Brothers. One of the special ways that CB seniors say goodbye is the Senior Open Mic. On Friday May 20th on the Main Lawn, the seniors will sing sayonara to CB.

Like all other school events during a class’ senior year, there is a nostalgic sentiment behind the final Open Mic Night.

For students who have been performing on stage throughout high school, the Senior Open Mic Night can be especially meaningful.

“It’s kind of like the final performance that I can say farewell and thank you for having me,” says Cooper Davey (‘22), a frequent Open Mic Night Performer. “It feels special to say one last goodbye with our talent.”

The Senior Open Mic Night is more than just a goodbye from the seniors — it is also a way for seniors to try something new before leaving high school.

“Anyone can audition for the show, but priority is given to seniors who want a chance to perform to kind of try things that they have never tried before in their high school career and just kind of wrap up their high school experience with a meaningful and fun night that gives them a chance to showcase who they are and be proud of what they can accomplish” shared Jacqulynne Sample (‘22) one of the Open Mic Night Club Coordinators.

The thought of performing in front of others can be nerve-wracking for some people and keep them from participating in Open Mic Night sooner.

“It’s terrifying — you are putting yourself out there in a way that’s kind of against everything that a normal person would do. You’re putting yourself up for judgment and facing the possibility of rejection and it’s scary,” shares Jacqulynne. “But then people get to senior year and especially the senior show in May, they realize that this is their last chance and it’s not something you want to miss.”

Some students don’t participate in Open Mic Night until the final event because of nerves, but they find comfort in the fact that they may not see the people they perform in front of for a while.

The support of the CB community makes the Senior Open Mic Night special for not only the seniors but the whole school.

“Some of the best parts for me is seeing all the families sometimes its little brothers and little sisters sometimes, it’s grandparents sometimes ,it’s those supportive friend groups by this point,” says Ms. Schorn. “Some people have some very tight groups and they come to support each other or to be social and have something to do so I like that community atmosphere and the people showing such great support of each other.”

The usual support that the CB community shows for the students during Open Mic Night has decreased because of the pandemic, but Jacqulynne is hopeful that the CB spirit will return for the final show.

“This year COVID restrictions are kind of fading out, so I think it’s gonna be kind of more of a resemblance of what normal was,” says Jacqulynne. “I think there’s just a lot of reasons to get excited about it.”

The Open Mic Night community makes each show special for not only the audience but for those participating.

“I appreciate the fact that they make it so easy for us, Kaylin [Holiman ‘22], Anna Deukmejian [‘23], and Jacqulynne right now at the moment, they do a great job of prepping nearly every single week to make the show as easy for us students to get into the show as possible just so that we feel less pressure so we can show them what we have and they support us” shared Cooper.

Open Mic Night can be a unique opportunity for students to show the CB community who they are.

“Usually, when I’m doing a show, I’ll do it for telling the story or say this story is about this character, but Open Mic feels like ‘hey this is me singing for you guys’,” Cooper says. “It really speaks to each individual person and student that is on stage and showing how cool we are.”

While the first thing that comes to mind when you think of Open Mic Night is singing, students have a lot of freedom in what they choose to do.

Senior Open Mic Night is not only about saying goodbye but helping new students say hello to the CB community.

“Six years ago we started this tradition of making this show $5 and making it a fundraising show. With the exception of one or two years, we have always given the money to tuition assistance. I know that other members of the community have also loved that about this Open Mic. That feeling that seniors are leaving a legacy behind for others to have that opportunity to go to Christian Brothers,” says Ms. Schorn. “We’ve been able to raise half a month’s tuition with the sales and stuff — that’s not nothing. I think it’s a beautiful thing that kind of organically grew and kids were like ‘Why not? Why don’t we support that?’ It’s getting harder and harder to pay for this education these days so that’s been a really cool thing.”

This final Open Mic Night highlights the inclusive community we have here at CB. The support that peers, families, teachers, and staff show for the students makes the close of an important chapter of students’ lives easier. Saying goodbye can be hard, but it’s special traditions like the Senior Open Mic Night that help wrap up students’ time at CB. 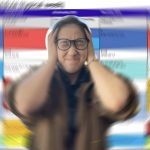 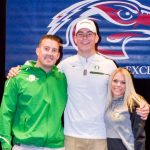 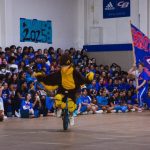