More Than Just A Life Update With Mr. Levasseur

When you walk down the halls near the freshmen lockers, standing outside Room 502 is Mr. Dave Levasseur, a bubbly, joyful, and charismatic teacher ready to help students enjoy their upcoming set. 502 explodes with loud and colorful posters, either corny science jokes or various band posters that cover the walls. He even has proudly […]

When you walk down the halls near the freshmen lockers, standing outside Room 502 is Mr. Dave Levasseur, a bubbly, joyful, and charismatic teacher ready to help students enjoy their upcoming set. 502 explodes with loud and colorful posters, either corny science jokes or various band posters that cover the walls. He even has proudly displayed a Oakland A’s baseball team poster that he loves dearly. Science teacher, father, ex-dean, music lover, and diehard A’s fan are only a few ways to sum up who Mr. Levasseur is.

Most of us, including myself, know Mr. Levasseur as the science teacher who loves to make dad jokes. A few years after he started working at Christian Brothers, he became co-Dean of Students alongside Mrs. Cecilia Powers. Crazy, right? For four years he was a dean and part time chemistry teacher.

“I am glad I did it, but honestly it was not the job for me,” he said, sharing that he found the job interfered with his teacher-student dynamic. After his era of being a dean ended, he resumed his role as the beloved teacher we all know today.

“My teaching philosophy is to focus on the teacher-student relationship above all else,” he says. Before COVID, he greeted every student at the door with a handshake. He even called a few parents of the students in the class the summer before to get an impression of whom he would have entering his class that fall.

His whole goal is to focus on the student and help them walk into class everyday with an open mindset for the subject. He expresses that he knows science is a challenging subject for some, but by the end of the year, he wants his students to feel eager to tackle these tough concepts, to go from hating the subject to tolerating it, and be ready to move forward to the next science class.

“I take it as a victory when I have a student who came in hating science and by then end being able to say they enjoy it,” he expressed.

My time with Mr. Levasseur was during our not so blissful year of online school. Yet every time I joined our Teams call, he brought positive energy and an optimistic attitude. He never failed to make me laugh with his cheesy dad jokes — he honestly made online school bearable. Instead of trying to teach it like it was an all in-person class, he shifted his teaching technique to make it easier on his students.

“Obviously I couldn’t shake anyone’s hand and build a relationship that way, so I found a way to do so online that helped me get to know everyone and still maintain the teacher-student relationship,” he shared. The summer going into the 2020-2021 school year, he called every parent of every student he had so he could get an impression and know what they were like. He also created the “Mic Check Questions” to learn a little about each student in every set. He brought meditation to break up the set to give everyone a few minutes to just close their eyes or step away from the screen.

He truly made the effort to know each student through the screen, even with all the technical problems that came with it. There was no difference in having Mr. Levasseur online and in-person — he is still the funny and joyful teacher I knew through that Teams call.

As unfortunate as online school was was, Mr.  Levasseur made his new best friend from it all: Fitz, the almost one year old puppy he adopted in quarantine. I remember that one afternoon in F Set when he showed us his adorable puppy on a call. He’s an adorable dog with curly fur and big eyes. Regardless of Fitz almost being one, Levasseur shares that “he still acts like a puppy and does dumb stuff all the time. He likes to hide his toys under the couch and whine for us to get them out. We still love him though.”

Aside from the beloved Fitz, Levasseur has two kids, Sophia (‘22) and Jackson. Currently, Sophia is a senior at CB.

“Right now we are touring and looking at various colleges and just happy she can have a senior year fully on campus,” he shares. They drive into school every morning together. But Sophia, who will graduate in May, won’t be the last Levasseur kid on campus. Next fall, his son Jackson will be attending CB as a freshman.

“It’s going to be great, I’m going to have another carpool buddy,” he shares with a huge smile on his face.

“It’s one thing to see the school through teacher eyes because you know it’s your job, but to experience it through parent eyes is another thing.” Even talking about the simple aspects like driving his daughter to school and seeing her grow up throughout the years here, you can tell it has made his job that much more enjoyable. But even after Sophia leaves, he will be making memories with his Jackson.

Now with things getting almost back to normal, Mr. Levasseur is most excited to attend concerts once again.

“I have probably seen over a hundred shows, from either big named people or smaller, less known [artists]”, he shares. He has seen some of the bigger acts like Rolling Stones, Elton John, and even Hootie and the Blowfish. Recently he has been able to see Billy Strings with fellow science teacher Mr. Kevin Scully and Cold War Kids with history teacher Mr. Vince Leporini.

“There is something so vulnerable to see the artist or band up there being able to sing without any filter and say whatever they want. It’s truly a raw impression of who they are as an artist or band.”

Mr. Levasseur is one of the most positive people I know. Even through a mask, you can tell he always has a smile on his face. He has always brought an uplifting energy that always makes his students’ day better. I can honestly say I was one of his students who went into science dreading it and came out with being able to say I enjoyed his class and it was actually fun learning.

Whether you will have Mr. Levasseur as a teacher, already had him, or have not had him, feel free to always say hello as you walk down the freshmen hallway near Room 502 — he’s always standing out there. Or feel free to join the Science Olympiad club, they are still looking for new members! 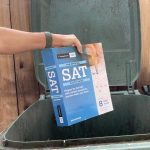 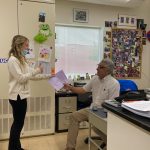 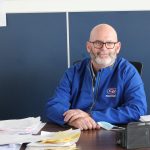