You are here: Home \ Community \ Featured Posts \ A Day Of AcaDeca
Community
0

Overdressed and anxious, my teammates and I pushed around the food on our plates while we waited for the awards ceremony to begin at the Academic Decathlon Banquet. This was the climax to nine months of preparation and countless hours of reading, studying, memorizing, and stressing. Was it arrogant to wonder if they would pronounce […]

Overdressed and anxious, my teammates and I pushed around the food on our plates while we waited for the awards ceremony to begin at the Academic Decathlon Banquet. This was the climax to nine months of preparation and countless hours of reading, studying, memorizing, and stressing. Was it arrogant to wonder if they would pronounce my last name right?

This was my third year competing on the CB Academic Decathlon team. I had been a starting member every time, but never did finish high enough for an individual medal.  Last year, I joined the team on the podium at the awards ceremony to receive the medals for 5th place and most improved team. This year, I was anxious to give this competition my third and final shot at winning an individual medal.

Some might be more familiar with the middle school academic decathlon, but high school is a different ball game. All nine members of the starting team participate in the ten events: seven subject tests, an essay, interview, impromptu and prepared speeches, and the Super Quiz. These events take place all on one day, with the exception of the essay the week before.

With a great number of events and opportunities to medal, scoring in the top three isn’t impossible. Last year, my teammates Grace Larsen-Anderson (‘20) and Emily Sperring (‘20) received silver medals for interview and literature, respectively.

Last year’s team set the bar high at fifth place out of the 27 competing schools, the highest CB’s Academic Decathlon team had ever placed. This year, we were up against 17 schools in Sacramento County, including strong competitors like Bella Vista and Folsom who consistently claim the top two spots each year.

By participating in AcaDeca, each team member added seven more subjects on top of their regular classes, sports, clubs, and any other extracurriculars. The CB Academic Decathlon Team is a class and club on its own, and there’s a separate curriculum for each subject: music, art, economics, math, social science, literature, and science.  Not including the novel or the music, there were almost 1000 pages of information to study.

The morning of the Academic Decathlon on February 1st, I rehearsed my speech in the mirror and hoped my memory would not fail me terribly during the competition. Walking into the cafeteria at Folsom High School, I found it a little strange to see my classmates in blazers, blouses, and other formal business attire. I felt like a child dressing up in my parents’ clothes — my blazer fit well enough but I was wearing my mom’s flats. After last year’s competition, I learned heels weren’t a great choice. Still, I couldn’t help but feel a bit pretentious. Some of my teammates could blend their personal style with business attire but I just felt ridiculous.

I had unfortunately drawn the short straw with speech and interview schedules and would have to wait until later in the day. During lunch, I paced back and forth, my brain running mostly on Emily’s brownies while I rehearsed my prepared speech in my head. I could fumble the words a bit, but the cadence was the most crucial part. There would be a 30 second window to end the speeches and ending a second before or after that time frame would result in a major point deduction.

We were allowed note cards for the prepared speech to use as a lifeline in case we got stuck. In previous years, I used them for twisting and tearing while I stood in front of the judges. This year, I decided to leave the note cards behind. We had free range for our prepared speech topics, and I was about to spend four minutes ranting about how much I want a cat. I walked out of the speech room, stressed but happy. I think I stopped breathing halfway through my speech but my performance was the best I had ever managed. For the first time in three competitions, I maintained eye contact with all three judges during both speeches.

Following the speech was my interview. This category always felt the strangest because the judges scored based on personality, answering skills, and appearance. Interviews were the ultimate level of subjectivity for this competition, and it was the one event where studying can only get you about 20% of the way. I’m fantastic when it comes to not studying, but I have a terrible handshake. During practice, our coach Ms. Mary Bowers compared my handshake to a dead fish.

After seven subject tests, two speeches, and an interview, the end of the day approached. While a decathlon usually ends with a 1,500 meter run, AcaDeca’s finale is the Super Quiz. It’s like taking a group quiz, separately scored, in front of a couple hundred people in a gymnasium. The proctors reveal how many team members out of the three answered correctly for each of the 14 questions.

The teams compete in three separate rounds grouped by grade average. Siena Schumaker (’20), Emily, and I competed in the final round after anxiously watching our teammates. During the third round, missing two out of the first four questions did nothing to suppress our nerves, but after the fourth question, we were able to regain some momentum.

The best part of the Super Quiz was that with three people answering the same question, there was a greater chance one of us actually knew the answer– or we at least had a better chance at guessing. Thanks to Emily and Siena and a lucky guess on a math question, I ended the super quiz with 12 out of 14 correct answers, guaranteeing a medal for CB.

Although I medaled in silver for Super Quiz, bronze for interview, and placed fifth in speech, only my Super Quiz score counted toward overall team score. Unsurprisingly, my teammates Emily and Siena outscored me in the individual events and only the top two scores count. That being said, I’m proud to have been a part of an incredible team.

Three years of Academic Decathlon have come to and end. From Tom Stoppard’s Rosencrantz and Guildenstern are Dead to Igor Stravinsky’s The Rite of Spring, AcaDeca offered an opportunity to learn about a wide range of topics in a competitive but team based environment. Explaining why I joined and stuck with Academic Decathlon is impossible. I only know that I wouldn’t take back any hour I spent for it. 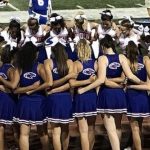 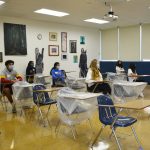 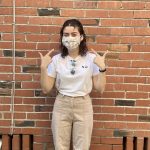