Students at Oak Ridge Elementary were being hastily dropped off on Thursday as the first bell of the day was about to ring. Parents scurried to drop their kids off for another day of school. As parents turned out of the drop off lane, they drove past dozens of teachers who were not in their […] 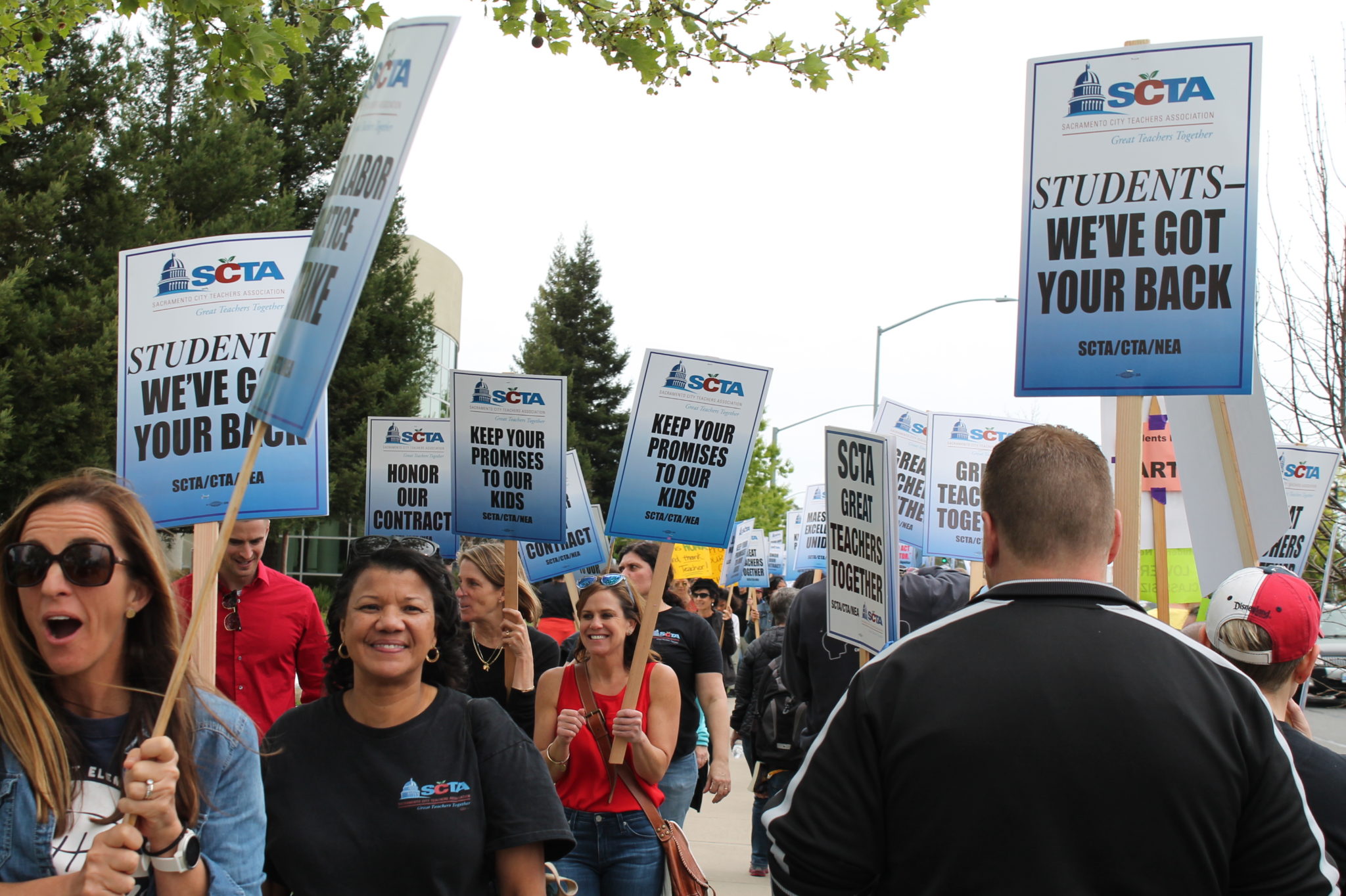 Students at Oak Ridge Elementary were being hastily dropped off on Thursday as the first bell of the day was about to ring. Parents scurried to drop their kids off for another day of school. As parents turned out of the drop off lane, they drove past dozens of teachers who were not in their classrooms, but instead, on a narrow strip of sidewalk in front of the school, pacing back and forth. They held picket signs and cups of coffee, with a big message for the Sacramento City Unified School District: “enough is enough”. 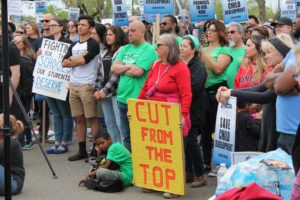 A woman with her sign urging the school district to “Cut from the Top”. Her message is similar to other slogans the teachers union repeated at the rally like “honor the contract, obey the law”, “when we make promises, we keep them”, and “when we fight, we win”.

Oak Ridge teachers and staff members joined educators across the city for a one-day teacher’s strike aimed at having the district honor their contract.

In 2017, Sacramento City teachers were threatening to strike if the district was not willing to reduce classroom sizes along with increasing student resource services and teacher salaries.

The district and teacher’s union agreement retroactively raised teacher salaries by 2.5% for the 2016 and 2017 school years. The plan also stipulated that teachers would receive a salary increase of 2.5% in 2018 and a 3.5% increase for 2019. While the wage increase is being upheld by the school district, the teacher’s union is arguing that other provisions of the contract are not being honored by the district. 6th grade teacher Dekeithi Walton was the spokesperson for the Oak Ridge faction of strikers. 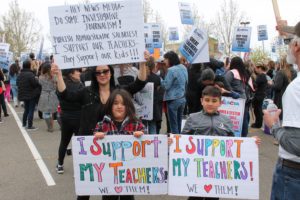 Parents and kids alike showed up to support their teachers. This mom and her kids were equipped with some homemade signs.

“I’d rather be in the classroom with my students right now. Every teacher out here that is holding a sign right now would rather be in the classroom with their students right now, but it turns out that the district does not want us to do that right now,” Walton said over the deafening sound of parents shouting their support and blaring car honks of solidarity. “It’s sad that is has come to this, but this is what happens. Sometimes you have to stand up for what it is you believe and we are at that point. I hope the district understands that we will not be pushed around and we just want what is right.”

Dekeithi said that while he has many issues with the administration, today’s strike was about one thing.

“We want the district to honor a contract that they signed with us. That’s pretty much all it is. When you sign a contract that means you are going to abide by what the contract actually states. That is our demand. Nothing more, nothing less.”

Heather Mains has been working in the Sacramento City Unified School District for 11 years now. She is a speech therapist and special education teacher who has been an educator at Oak Ridge Elementary for the past 2 years. 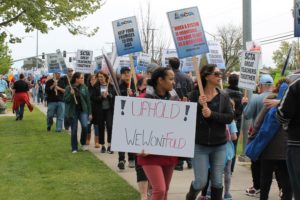 Strikers picketing up and down 47th Ave, in front of the SCUSD Headquarters.

“I have two jobs, and I have zero discretionary income,” she claims. “It’s been hard since I’ve been here, but I love what I do. But lately the district has been really fiscally irresponsible.”

While Mains was happy about the wage increases the 2017 contract afforded to teachers like herself, she also wants money to be directed towards more funding to bolster the few resources available to students.

“Today we are here because we came to an agreement that we’re going to renegotiate our healthcare that we have so, as the administration would say, a more ‘fiscally responsible’ type of health care. We agreed to that with the understanding that the money that we would be saving with the new health care would go back into the schools. Now they are saying they are going to take that excess money and bail them out of this bankruptcy that we are in that was caused by them completely overspending. People have gone on massive vacations with this money. The administration salaries have bloated. Our superintendent is one of the best paid superintendents in California. The jobs that they created in the district, as far as administrators, have grown and grown and grown and grown. So it’s really top heavy. Meanwhile our class sizes are huge and our students don’t have the resources they need”. 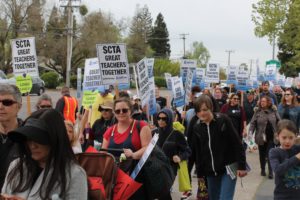 Many of the picketers were students, parents, union members, and labor activist who wished to show solidarity with the teachers.

Last September, the county Board of Education rejected the proposed budget plan by Sacramento City Unified for the first time. The board cited the district’s $35 million budget gap and continued annual deficits as the reason the budget could not be ratified. In the six months since, a budget proposal has not been approved and the district faces a state takeover if no proposal is passed by June 20th.

The school district proposed to solve the debt crisis and the possible threat of a takeover by moving health care savings into the debt hole. The teachers strike rejects the school district’s plan. Instead they want the $16 million of savings in health care cuts to go towards student services. The union hopes to reduce the budget crisis by cutting mismanagement and unnecessary cost within the upper echelons of the administration. These proposals come at a troubling time for the SCUSD, as the district is facing a looming financial crisis.

Following the failed SCUSD proposal, the Sacramento City Teachers Association (SCTA) proposed its “Students First Budget Rebalancing Proposal”. This December 2018 proposal claims that it would save the district $60 million by: 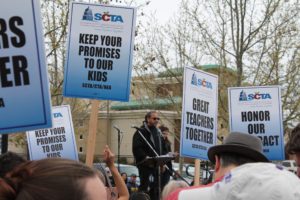 Kindergarten teacher and president-elect for the CTA Toby Boyd urges the school district administration to honor the contract.

The SCUSD administration rebuked the teacher’s union’s claims that the central office of administration is too top heavy. They cite California Department of Education data that shows that 4.4% SCUSD’s general funds go towards administrative cost, whereas neighboring school districts pay on average 5.7% for their administrative needs.

The administration, however, does not deny the other $44 million in cost saving proposed by the SCTA.

Hundreds of teachers, school staff, parents, students, and avid supporters converged outside of the school district’s headquarters on 47th Avenue and Stockton Boulevard. The 12 P.M. rally was well organized with packaged meals, cases of water, a line of port-a-potties, and picket signs as far as the eye can see.

“[The anger] will intensify if the contract is not honored,” kindergarten teacher and president-elect for the CTA Toby Boyd said about the outrage within the teacher community. “When you make an agreement and it is signed and it is agreed upon by both parties, it needs to be honored. The district and the [teachers] association came to an agreement, and for some unknown reason, they are deciding to not behold and follow that contract. We need to make sure our students know that when we have agreements, regardless of what they are, especially when they are signed and this important. [The contract] needs to be honored.”

School nurse Julie Davis tells me this is her first time on strike. She is picketing because, despite being very proud to work in this district, “there is definitely room to grow”. In her experience as a nurse, Davis is worried about school nurse coverage and health coverage for kids overall.

“This district rocks because, for diabetic care, it’s some of the best I’ve seen. We also have a very strong nursing group and social workers and counselors for the kids. Those are all really great, but there could be more. We still are stretched pretty thin, and there are many schools that don’t have any dedicated nursing, meaning that we will cover the basics to fulfill laws and make sure kids with asthma have a plan, but if a kid falls or has a crisis, there won’t automatically be a nurse there.”

“I work in schools where students have a lot of trauma, so relationships are even more important for them. We really need stability in staff there because it will change behavior and change how much they are able to absorb in the classroom,” Davis says. “I think right now it’s not getting more staff or more nurse or more teachers, but making sure we have the ones we have right now. That’s my biggest concern — these relationships are vital.”

Ana Jenkins is a nurse and member of the California Nurses Association. Although not a school nurse, Ana believes that solidarity is an important step towards justice for students. 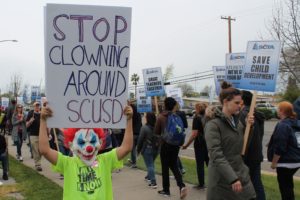 A student stands at the street corner as drivers honk their horns in support of the strike.

“I’m out here for the students because that’s what the teachers out here are all about. Give money back to the students and take it away from the district greed and give it back to art and music. Teachers are on the front lines just like nurses are. They are hands on — they take care of the kids.”

Many students did not show up to school on Thursday, either staying home, taking the day to hang out with friends, or picketing with their teachers. Kennedy High School senior Bernadette Tropel tells me that she fully backs the teachers.

“I support my teachers coming together and sending a message to the Board and Superintendent [Jorge] Aguilar. It will remind them why they got into education in the first place — to support the kids and further our futures.”

While the strike has put a strain on testing and learning soon before her critical AP tests, Bernie “easily” puts more of the blame on the school district.

“The strike has made me feel disappointed in my school district, but proud of my teachers. Teachers know how to educate children better than elected officials. They should be at the forefront in deciding policy and funding, not trying to negotiate afterward.”