Sara Littlejohn (‘19) is a senior actively involved in CB’s community and an amazing sister to her brother Will and sister Katie. From the honor roll to earning three varsity letters in one year, Sara is known by the CB community for her infectious smile and kind heart. When she’s not working hard or cracking a joke […] 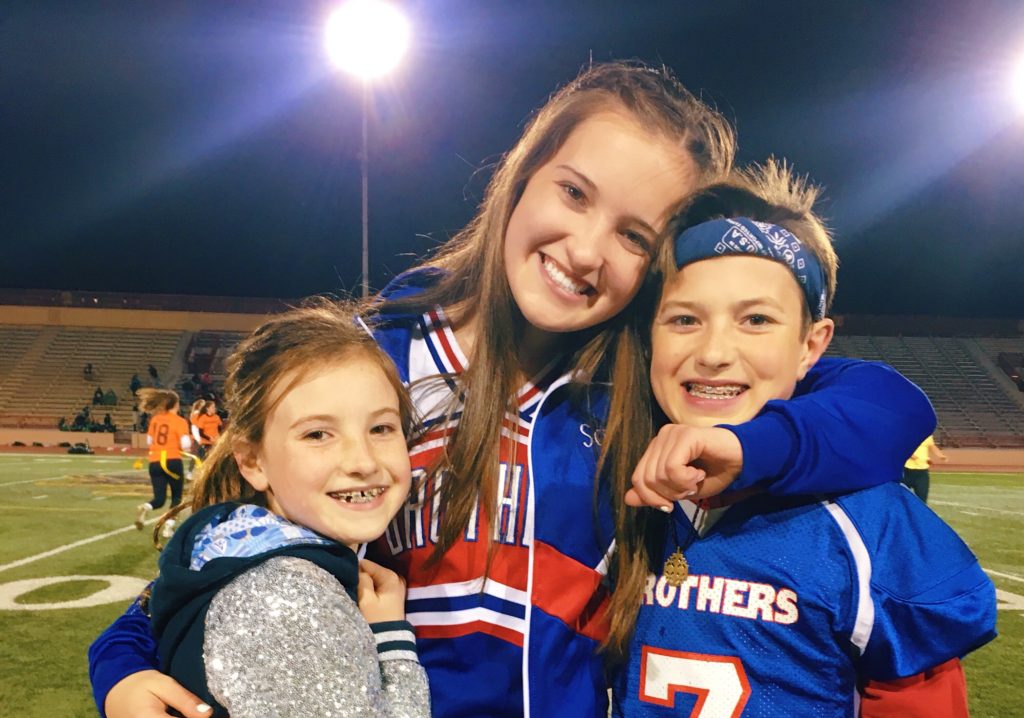 Sara Littlejohn (‘19) is a senior actively involved in CB’s community and an amazing sister to her brother Will and sister Katie. From the honor roll to earning three varsity letters in one year, Sara is known by the CB community for her infectious smile and kind heart. When she’s not working hard or cracking a joke in class, you can find Sara teaching new choreography to the Falcons cheer team, pumping up students at the rallies, and rooting on the Falcons at holy games. Sara has cheered since age seven, but her entrance to the cheer world came about spontaneously.

“There was a flyer at my school that said ‘come join cheer’ so I thought why not? I was kind of tired of soccer, so I went to practice and I cheered for the Rio Americano Junior Raiders for three years. After that, I cheered for the Junior Falcons for a year, and I’ve been doing CB cheer ever since.” 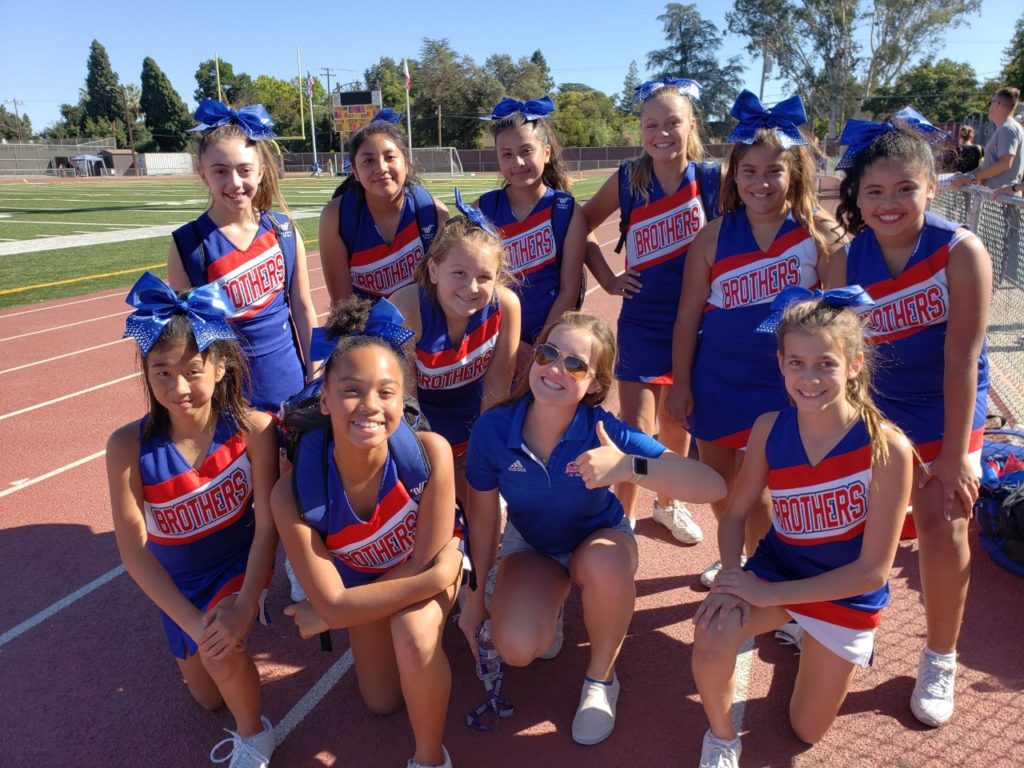 “I totally didn’t expect it,” she says. “Bella Latino (‘19) was my co-captain, so we really bonded a lot because we did a lot of work behind the scenes. We’re like the playmakers — we make all the routines. My sophomore year, Martina Garcia (‘19) and I were captains, which was a lot of fun too.”

Sara’s leadership role has led to her falling in love with cheer, and the team bonding has made Sara exceptionally close with her squad.

“I like the team bonding we have at cheer. We have a really tight knit group of seniors, so we have a lot of fun and laughs at practice,” the senior says. “They’re like my second family. I can tell my cheer sisters anything — we’re always here for each other.”

From cheers to halftime shows and teaching stunts, Sara spends most of her spare time working on improving her squad. However, her hard work often goes unnoticed because of stereotypes about cheerleading not being considered a sport.

“People always say ‘oh, you’re a cheerleader, you don’t play a sport.’ There are two different worlds of cheer. There’s the competitive side and the football sidelines. The sidelines are a sport, but it’s not at the level that competitive cheer is at,” Sara says.

Just like any other CB sport, cheer spends many hours practicing and conditioning for competitions, rallies, and games.

“We do weights and conditioning just like any other sport. We run laps and put together routines filled with stunts, jumps, and tumbles. If you asked someone who plays football or soccer to do a cheer routine, they’d be completely lost. Not everyone can lift girls in the air and throw them around. There’s a lot of hard work and dedication that people don’t recognize. From practices to games, we do the same things they do. It’s hard when we don’t always get the credit we deserve, but I love cheer so much.”

After all of these years of cheering, Sara has decided to put down the pom poms and cheer for her team in the stands at Texas Christian University this Fall. 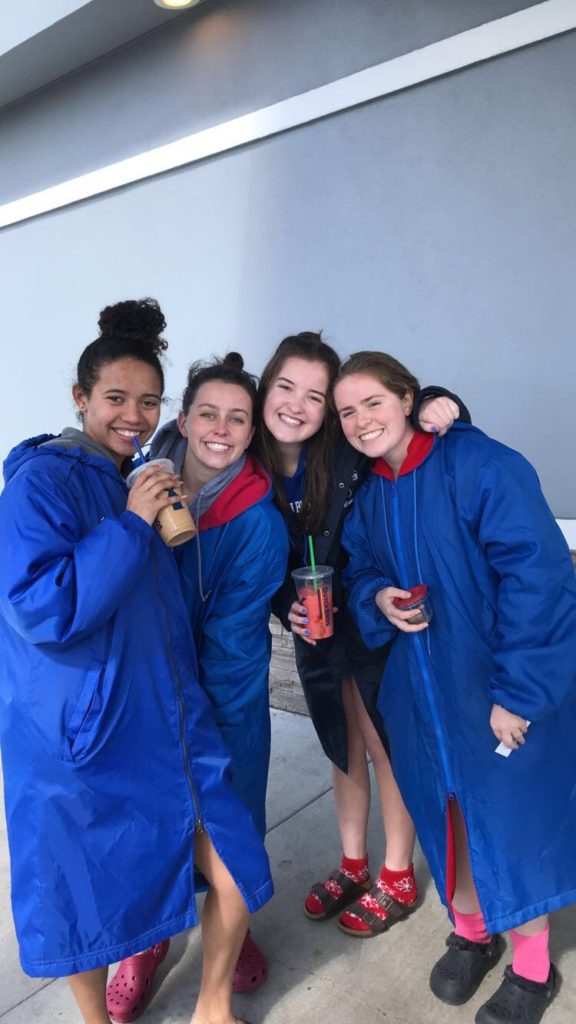 The senior divers prepare for a competition.

“I can’t compete with the Division I cheerleaders, which kind of [stinks] because that would be a really great experience. At the same time, I’m glad to not cheer in college because I’ve been on the field my entire life, so I’ve never been able to experience a big football game and root for my team.”

Sara also plans to join more social activities in college instead of focusing on just sports.

“I also want to rush a sorority, so being able to get ready for the games and go with my sorority sisters would be so much fun because I’ve never experienced that before, especially with a big Division I team.”

Although Sara is often seen cheering for the Falcons with her squad, many don’t see her dedication to CB’s Varsity Dive team. Sara started diving last year and fell in love with the adrenaline of hitting the water.

“The feeling you get when you accomplish a new dive is like no other,” she says. “The adrenaline is crazy — it’s like you’re on a drug. I loved it so much that I did it over the summer and into the fall, which was a lot of fun.”

One of the best things about dive is that there is only one team, so Sara gets to interact with people from all classes.

“We like to sit in the hot tub and just talk. It doesn’t matter if you’re a freshman, a senior, the best diver, or the worst diver — we all just like to have fun,” the diving queen says. “Nobody’s the best diver because it’s a really hard sport, so we all make fun of our mistakes.”

Like cheer, dive requires many different skills that can’t be covered in one practice.

“Every practice is different, but there’s usually a focus on one jump. There’s a few different dives we focus on, usually front dives, back dives, and twist dives. After we do that, our coach sometimes teaches us a new dive.”

Although she’s super involved on campus, nothing is more important to Sara than her friends. Haley Strack (‘19), one of her closest friends, knows Sara’s big heart and infectious smile. From her “awful driving” to her classic vest and hunter boots outfit, Haley loves Sara’s unique quirks. Although you can always find them joking in the hallways or singing one of their original songs, Haley really loves Sara because of her ability to unabashedly be herself.

“She’s the happiest person and so fun to be around. There’s no one else you can laugh and cry with at the same time. She’s not afraid to be herself and will stick up for her friends — she’s loyal to no end,” Haley says. “I love how close she is with her family and how she makes time for the important people in her life. She always shows her friends that she cares about them, which is very rare.”

Sara has also been Haley’s rock and inspiration through her personal challenges.

“She’s always right beside me even when I’m being difficult, and she never stops showing that she cares. Whenever I have friend problems, I’m always reassured knowing that I have a ride or die by my side and that she’ll never stop being by my side.”

Sara and Haley undoubtedly have a friendship that many people can only dream of. From cheer to dive and other activities, Haley supports Sara through thick and thin, and feels lucky to have her as a friend. Sara is a undoubtedly an integral part of the CB community, and she’ll be missed greatly when she graduates.