Have you ever wondered what it would be like to attend high school with a sibling? Or maybe you already partake in the infamous number of CB siblings that occupy our grounds. But what if you took a step further and later returned to work at the same high school with the same sibling? Very […] 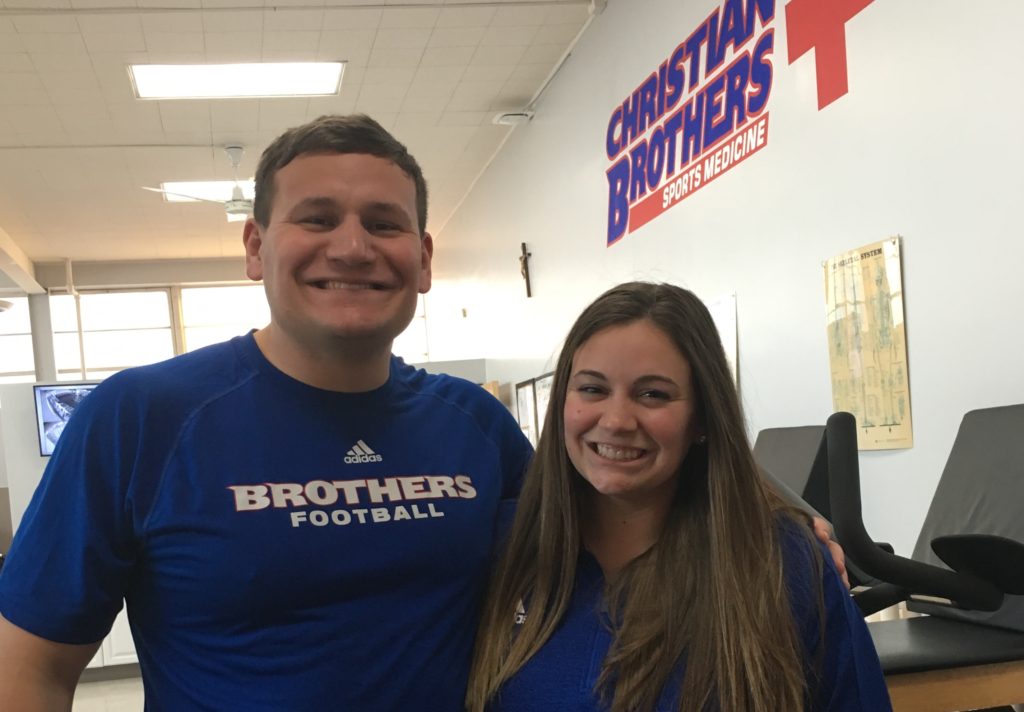 Have you ever wondered what it would be like to attend high school with a sibling? Or maybe you already partake in the infamous number of CB siblings that occupy our grounds.

But what if you took a step further and later returned to work at the same high school with the same sibling? Very few people can say that they’ve been in this position, but for two of CB’s beloved staff members, Eddie ’10 and Jamie Ralph ‘12, working alongside each other is a natural and daily occurrence that they’ve mastered. The Talon sat down with Eddie and Jamie to get a firsthand understanding of how each one is adapting to this new change.

Eddie works at CB as the freshman head basketball coach, varsity assistant football coach, and substitute teacher. Eddie earned his bachelors degree in journalism and mass communication from the Walter Cronkite School of Journalism and Mass Communication at Arizona State University. After playing sports in high school, Eddie transitioned to coaching them in college and pursued coaching at CB after college.

Jamie joined the Athletic Trainers Program in high school and continued to pursue it throughout college. She got her bachelors degree in Athletic Training from Chapman University. While Eddie is coaching various levels of athletes, Jamie works in a similar field of athletics as an assistant athletic trainer and as a physical education instructor. Her job as an Athletic Trainer entails her overseeing injured players and training students in the Athletic Trainers program.

Since they work in similar fields and with many of the same athletes, crossing daily paths is almost inevitable to Eddie and Jamie. They say they’ve benefited and even learned from each other’s role in athletics.

“It’s kind of cool being able to communicate with someone that you know really well in the roles that we have, me being a coach and her being an athletic trainer,” Eddie shares. “There is an understanding that because I have been around Jamie and her job, I have gotten to know and understand better some of the things that she does and so I can maybe come at it [coaching an athlete with an injury] with a different mindset than maybe some other coaches can.”

Jamie shares that having an older brother in the same field of athletics relieves some of the stress of her job.

“Eddie is very good with giving extra insight into the athletes,” she says, he also “gives an overview of what athletes did in practice injury wise.”

Eddie draws upon the unforgettable memories of early morning drives to school that they experienced as teenagers.

“We used to drive to school together every morning, and I think she would say maybe three words to me,” he jokingly shares as Jamie chimes in that she is “not a morning person.”

Although the morning car ride phase of their high school experience is over, both agree that working together has strengthened their sibling relationship and makes their jobs more enjoyable.

“It is really cool working with Jamie because it has allowed us to start a relationship of seeing each other everyday and talking everyday which isn’t something we did in college,” Eddie shares.

“It is nice seeing him and having a conversation with him everyday,” Jamie says. “ It is comforting to have people on campus that you know.”